The Queue: A new dawn 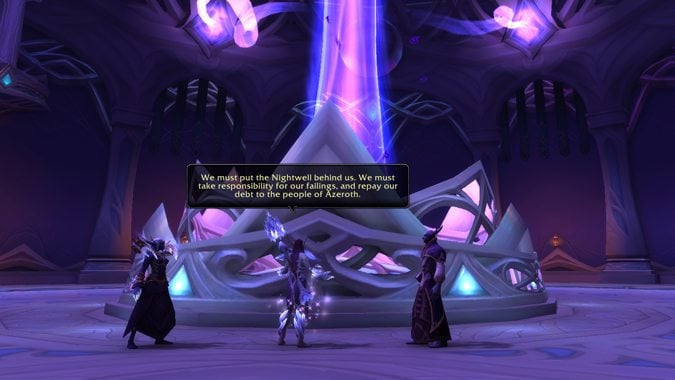 Is anyone else kind of hoping that with the resolution of Suramar’s storyline, we might actually see some Nightborne explorers checking out the world? I mean, they’ve been in that bubble for ten thousand years or so. You’d think they’d want to check out all the stuff they missed, right? Even if they don’t become some kind of playable race, I’d still love to see them expand beyond the Broken Isles.

Chionicle Q4tQ (do we still spoilertag Chronicle 2?): If Arcane magic caused Ogres to grow 2 heads and increase intelligence and magic power, what is stopping the Orcs (or anyone else) from replicating/evolving that trait?

No need to spoiler tag, the book’s been out for months now. As for your question, it could be a couple of different things — either the Ogres were messing with some serious magic, or it’s just a weird, unique part of Ogre physiology. We don’t really know what the sorcerers of the Gorian Empire were studying back in the day, or what kind of magics they were working with. But given the sheer number of other races that have been practicing and working with arcane magic with no sign of double-headed babies, I’m going to lean towards it being more physiology than anything else. Something that’s unique to Ogres.

so, Suramar is really that great? i’m having trouble getting through it, mostly because i am really starting to hate trying to navigate the city. : (

I think so, but that’s one of those questions that is really open to personal interpretation — I loved the story in Suramar. Yes, the city was initially difficult to navigate. But we’re looking at a civilization that’s been locked away for over ten thousand years, so it’s almost natural we don’t really know our way around. I think I really started to fall in love with Suramar when I kind of pushed aside that feeling of needing to get things done quickly or efficiently and instead just let myself get lost in the city for a while. It’s a massive metropolis. By the time you finish the Suramar storyline, you’ll have combed every inch of the place and you’ll know it like the back of your hand. Having the disguise, the grappling hooks, and even the hidden baskets scattered around the streets can help you avoid those pesky guards until you sort out where everything is.

Question for the Queue: Has there ever been an NPC that uses a common quote from another property?

There are way, way, way too many pop culture references in World of Warcraft to list out here. But if you check out Wowpedia, they’ve got a pretty substantial list available. I don’t know if it includes everything, but it’s definitely worth a read if you’re interested in that kind of thing.

Random question: is there any actual lore behind Troll druids, or was it more of a “need to balance adding worgen druids, so trolls why not?”

Back when Zalazane was taking over the Echo Isles from the Darkspear, he was also cutting off the loa priests and witch doctors from contacting the spirits. These guys — including Zen’tabra — took off and hid in the jungles. While there, Zen’tabra had a vision of the Emerald Dream and spoke to the raptor loa, who revealed a new way to connect with the spirits of nature — all of them. Basically, some of the loa of the Trolls are actually Wild Gods, primal manifestations of nature. The same ancient beings that Druids have an affinity for. So Druids are really a recent addition to the Trolls, they only revealed themselves back just before Cataclysm came out. Mind you, at least part of it was that yes, they wanted to add a new Druid option to both Alliance and Horde. But they did try to add a little story behind the Troll side while they were at it.

Since we’ve not seen or heard from Wrathion in a long time, what do think/hope he’s been up to? Working on his golf game maybe? Getting some new recipes for Nomi?

I like to think that he got in touch with Jaina Proudmoore, and the two of them are working on some kind of plan together. Partially because I’d like to see how the two of them interact with each other, but mostly because they’re both two lore characters that logically should be involved with the expansion, but aren’t.  Jaina wouldn’t just desert the world though — that’d be so against everything her character is as to be absurd. So I figure she has to be out there looking for her own kind of solution, one that doesn’t involve working with the Horde. Wrathion seems like a pretty good option — if a snarky one.