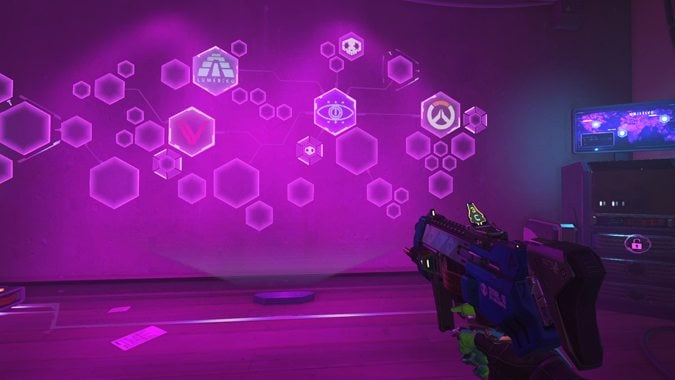 I love the new Castillo map in Overwatch. Or I guess what I should say is that I love all three of the new maps, but Castillo takes place in Sombra’s hideout and it’s my favorite. Not only do you get to take a peek at her computers and scattered equipment, but there’s a big wall of global conspiracy to check out. There are a lot of blank spaces in that diagram, though. Maybe we’ll see them continually get filled in as the year goes on? We’ll have to wait and see.

Q4TQ Anne edition : I’m starting to get really starved for Overwatch Lore. Any idea when we can expect something new, be it a comic, an animated short or whatever? Is there any pattern to how often they release stuff or is it just whenever something new is ready?

Also any idea what / who the next piece of lore will focus on or what you would like it to focus on?

I thought maybe we’d see something during Overwatch’s anniversary, but I haven’t seen hints about anything just yet. However, I think we’re overdue for some more information on the elusive Doomfist, whether he’s added as a new hero or we’re just given more story about the guy. There’s also the matter of that tantalizing footnote at the end of Infiltration. Obviously Zarya’s going to be up to something, we just don’t know what yet. And we don’t know what Sombra’s after from Katya Volskaya, either. So there are a lot of pieces that could be picked up here, we just don’t really know when it’ll happen yet.

Q4tQ: Drek’Thar the Farseer in our Garrisons, the one who used to give us those weekly quests (i.e., do 4 Timewalking Dungeons, Beat 4 Pet Battles) will now offer to queue you for raid wings. Are these LFR wings? Are they quick teleports into whatever difficulty you set the raid to? Are they just scenarios? Has anyone tested these?

Yep! You can queue for LFR through Drek’Thar — once you’ve outleveled the content, you can’t go back and queue for LFR through the usual interface. The main reason for this is because people really wanted to collect alternate appearances of gear that only dropped in LFR, but they had no way to get to those raids once the expansion was over and they’d leveled beyond it.

Since many of you are self-admitted altoholics I was wondering: do you guys look up information on a spec before playing it? Or just pick it up and kinda start experimenting? Every character I had at 100 changed so much from WoD, they feel completely new and I have this irrational fear of setting up my bars/keybinds wrong. Is this just me?

I don’t know about anyone else, but for myself, I just…play the spec. I’ll usually look in the spell book to get a general idea of what a rotation looks like, but I don’t really look up any information unless I’m feeling like I’ve missed something. If I like how a spec feels, I’ll keep playing it, if not, I’ll go back to the old spec I already know I love to play. Keep in mind though, I’m not doing any kind of heavy raiding or PVP — so squeezing out the best numbers possible isn’t really a priority as far as I’m concerned. As long as stuff dies and I don’t, I’m happy enough!

Probably an odd choice to most people, but I’d kind of like to see something about Zenyatta. I mean, the dude traveled the world, so there’s plenty of opportunity for all kinds of cameos, you’d think. But more than that, I think omnics are pretty fascinating in general. I kind of want to know more about them beyond that giant Omnic Crisis umbrella. And Zenyatta’s involvement with the Shambali would be cool to see.

Q4tQ: why doesn’t Tyrande believe in herself? The entire fight in the end times dungeon is her deprecating herself. She spent so much time praising Elune, that she never took the time to praise herself.

Well you have to keep in mind the premise behind End Time — you’re looking at the end of the world. It’s a wasteland where the Hour of Twilight was allowed to take place. These aren’t heroes that you’re fighting, they’re the tortured spirits of some of Azeroth’s last defenders. They failed to save the world, so they’re doomed to just kind of…linger. So yeah, Tyrande’s not exactly feeling good about herself or tooting her own horn in this warped version of the future. She failed. They all failed.