The Queue: I am never going to think Tanks have too much anything 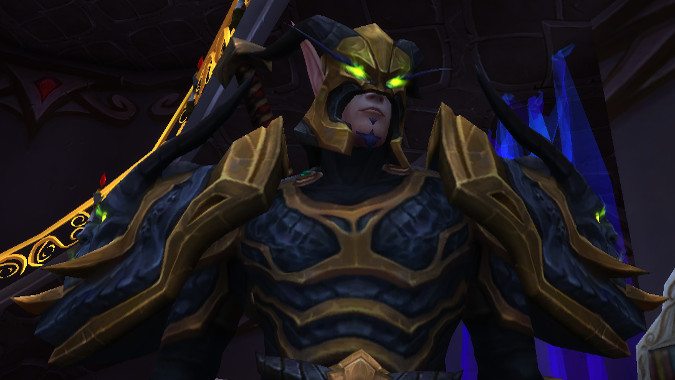 Q4TQ: Do you think that tanks have too much mobility? Maybe it’s because I play a couple specs that require stand and plant but I feel like I just spend dungeon runs (especially this past week’s timewalking dungeons) running to catch up with the tank. I am generally further away from the corpses so I have to stop and loot corpses that the tank and melee have already looted and then even with blink it’s just like the tank is already miles ahead.

JUST ABOUT EVERYONE, I’M SURE

Come on, you can’t leave a one word answer.

Come on, expand on it.

Tank mobility is necessary as a consequence of the shift in tanking design over the years that requires it. Tanks have to be able to pick up adds, babysit DPS and healers over a large raid area, avoid specific mechanics and otherwise be in several places as close to at once as is possible. And frankly, not all tanks have really awesome mobility — my Blood DK, for instance, has Wraith Walk. That’s about it.

Every time I hear a DPS complaining about tank mobility, what I’m hearing is “I want more groups to wipe because the tank can’t pick up those ads and avoid that AoE at the same time.” We changed tanking so that sustained threat generation isn’t as big a role anymore, so now tanks are challenged by juggling incoming damage, maintaining awareness of their area and reacting quickly to incoming situations. All of these require mobility.

Furthermore, especially in Timewalking, it’s a lot less that the tank has more mobility and a lot more that he’s tearing off towards the next encounter. I main a Warrior. I DPS a lot on because I’m Arms and I haven’t even touched my Prot artifact yet. I have a Legendary shoulder that gives me three charges of Heroic Leap. Three charges. And I’m still often having to burn all three of them to keep up with a Paladin tank, not because he’s super mobile but because he doesn’t even stop to let the corpse get looted before he’s out of the room pulling everything in sight. That’s not tank mobility, that’s just players.

Quite frankly I’d give some tanks more mobility. DK’s, Paladins and maybe Guardian Druids (I admit I’m the most ignorant of current Guardian mechanics, haven’t played one this xpac.)

I had the most miserable Invasion scenario experience yesterday at the end of Val’shara’s invasion. I was grouped with a random DK and Warrior and we wiped at least 5 times. They died on the first elite mob. They pulled every mob in the instance just running to the crystals and not killing anything on the way, which wiped us like 3 times. They wiped on the elite on the top of the tower once or twice. They wiped on the last boss once or twice. Look. I’m not a very good WoW player. But what these two were doing I have no idea. There gear was fine, they were both plate classes, but they died soooo quickly. They stood in all of the bad stuff, pulled every mob for no reason, and always died before I did (I was playing my MM hunter without a pet). The one time I spoke up to say that they pulled the whole damn instance when they just ran towards the crystals without killing anything, they told me I was the one who pulled everything and caused the wipe. Meanwhile I was the last one to die every single time.

Back in 2007, I was applying to work for a site that doesn’t exist anymore that covered World of Warcraft from a player’s perspective. In my tryout post, I wrote about what I called ‘the myth of plate’ — the notion many players have that being in plate armor means squat against most forms of damage, when in reality it really doesn’t. Yes, the armor is higher, but armor only mitigates physical damage. It doesn’t do squat against (as an example) massive amounts of magic damage from imps throwing fireballs and floating eyeballs shooting lasers at you.

It also does absolutely nothing to mitigate damage from stupid pulls you make because you’re too good to pay attention to the scenario’s encounter win condition.

Val’sharah seems to have especially bad conditions for some people to grasp. My wife and I have done it and we had a ilevel 910 Guardian Druid (he helpfully told us this like six times) continuously die while we simply went around, killed the groups and broke the crystals. He wiped the entire group at one point by pulling everything on top of us while we were fighting to get to a crystal, so we abandoned him to his fate and basically two-player’ed the entire scenario.

I don’t know why people think being a class that can tank means you can ignore what you’re supposed to do to win and just pull everything. Many of the demons in the Val’sharah scenario are skippable. Not in a ‘let’s skip that pat’ way that ends up dragging them to you later, in a ‘you can go around that one now and clear it out later’ way.

Do you think they’ll take away our artifact weapons for next expansion, or evolve them? If so how do they justify taking them from everyone?

I think they’ll simply stop scaling and we’ll eventually get new weapons that replace them, much the way that if you had the Warglaives in BC, you replaced them about 2/3rds of the way through Wrath, or if you had Shadowmourne going into Cataclysm that you replaced it in dungeons gearing up for raids. They’ll put green weapons of a sufficient ilevel so that players who start in Rage of Argus (my made up name for the next expansion, please don’t take it as the actual next expansion) can get weapon drops, and those of us who have Artifacts will put them in the bank.

I’m hopeful that we’ll be able to use our Artifacts as transmog appearances if we decide we really like them and want to use them once Legion is over. But I generally expect the mechanic to be done once Rage of Argus launches. I don’t think they’ll take the Artifact, but there might be a quest where someone says ‘Now! Channel all the power of your Artifact to destroy the MacGuffin and end this expansion’s story, hero! It’s the only way we can wrap things up and get on with the next expansion!”

Not in those exact words.

If you had to guess for next expansion, do we get a new race per faction, a hybrid race, no new race at all?

No new race at all.

Look, we don’t need new races or new classes at this point. Besides, if they add a new class it’s going to be a tank (it’s always a tank) and frankly I feel like we have enough tanks. We got a new class in Legion, so if we were going to get a new anything it would likely be new races, but I hope we don’t. I feel like we have plenty of races to choose from at this point. There are seven race choices per faction (six unique races + Pandaren) and it’s  a lot, imo. I can’t imagine they’re going to do another ‘this race can join the Alliance or the Horde’ race, and adding two new races would mean we’re up to fifteen playable races, eight per faction. That’s a lot.

I could be and often am wrong. That’s just my take on it.

Q4tQ: Recently it seems like there have never been any overlapping WQs for envoy quests- for example, when Dreamweavers and Kirin Tor are up, I haven’t seen any KT quests in Val’sharah. They used to overlap frequently, allowing credit for both. Is this an explicit change Blizz made or just RNG antics?

So Mitch linked to my poll and y’all have discussed if Hylians are Elves or not. So far the votes are that Hylians are in fact Elves. So I leave you with this thought — what if Activision Blizzard and Nintendo did a merger and the next WoW expansion was just us going to Hyrule?

Okay, that’s the Queue for today. I gotta go have my blood removed from my body and subjected to experimentation. I’ll see y’all later.

Blizzard Watch is made possible by people like you.
Please consider supporting our Patreon!
Filed Under: Elves, Tanks
Advertisement