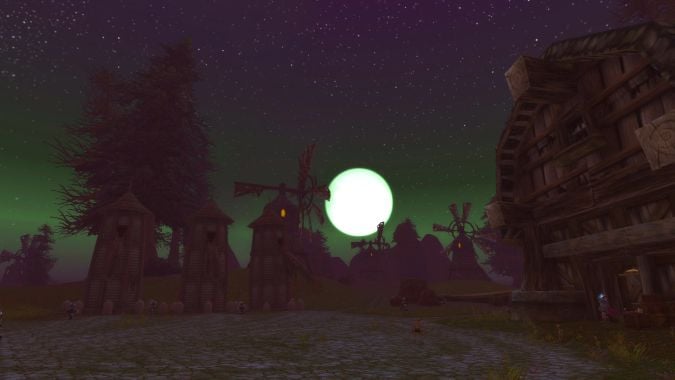 Tirisfal isn’t what it used to be, but that doesn’t make it feel any less like “home” to me in the world of Azeroth. It’s where my journey into the game first began — the music, the NPC voice lines, the unexpectedly high-level mobs just beyond the Bulwark… it all brings me back. What do you consider “home” to be in WoW? Or is this just a game and sentimentality dead?

Ponder that while you read some questions!

Mitch is up tomorrow right? I have a HotS question if so:

Quite often I’ll start a match to find one person has DCed, so my team is forced to fight 4 vs 5, with the AI bot doing a terrible job at staying alive and usually resulting in a loss. The other day as the match was about to end one of my team mates said “Report the person who dropped.” I was surprised and asked why punish them for their internet cutting out. They responded that their internet probably was fine, and they dropped for other reasons like not liking the map or the team makeups.

Are DCs before matches even start a serious problem? Do you think people are dropping matches on purpose? Should people punished and placed into the lower tier along with the trolls or other toxic players?

{PB} There’s a couple questions here, so I’ll try to unpack them one-by-one:

The caveat here is ranked play. Intentionally or otherwise, DCing can screw with people’s hard work and is a lot more frustrating than DCs in QM or VS AI, if you ask me. Reporting isn’t going to automatically ruin a person’s gaming experience, so I think in ranked cases, it’s okay to report and make a note.

If it was a one-off, no harm done. If the player is doing it intentionally, you’re helping. If it’s a consistent connection problem, but unintentional, well… sorry, but that person shouldn’t be queuing for ranked play until they’ve fixed their internet issues.

KALCHEUS DIDN’T HAVE PANTS ON (OR SOMETHING)

TIM HARRISON WANTS TO KNOW IF OVERWATCH… SUPPORTS… ITS HEALERS

Have you ever seen a healer get the Play of the Game in Overwatch?

I have! It’s certainly more rare, but it happens. It usually ends up being a Mercy who pulled off a clutch resurrection that turned the game around at the last second. If another Support, then… hm, I think most other Support PotGs I’ve seen actually wound up being the result of an offensive play.

Nothing like that Sentry Turret POV to really give people that play-of-the-game hype.

LOCKENGWEN, THE FABULOUS FIGURED OUT THE SECRET TO GETTING IN THE QUEUE (THE SECRET IS MY EGO)

QFTQ: Why is Mitch so Angry today and how can we cheer him up? Seriously… everyone brainstorm to cheer Mitch up!

Oh, you know! I was just having one of “those” Mondays. S’all good, though! I found a way to cheer myself up — and I do appreciate the tentacle-mount offerings ;P — and now it’s Tuesday, which is good for everyone! Because it’s  Patch Day! ^_^

Maybe the last [number] Bosses Enter I will do, but here goes:

Everybody in Heroes of the Storm (including Malthael). Who would Win?
Loyalties, Rivalries, Groups, Betrayals. Everything’s allowed.

For starters, I enjoy these, even if I don’t always give super long answers (I talk enough in these things anyhow). They’re fun to imagine, and I like to think they inspire the other readers to ponder this stuff over.

As for your question… I give it to Medivh or Valeera. The former because he can just fly around invincible until everyone’s killed one another, the latter because she can stealth and force him to un-bird before ganking him to smithereens.

(Baby Fizzl hits 60. Oh, and you’d better believe I went back and got revenge on that stupid bear as soon as I was able.)

‘FIFTY SHADES’ DILLENE KINDA SCARED ME WITH THIS ONE

I don’t have (nor did I look into finding) any context for this, so I’m just going to say… that’s kinda mean, you stupid buttface. But I still love you <3

Q4tQ: with the extended maintenance, what dastardly house chore is most likely going to get done?

I wish I could say I’d finally tidy up my desk a bit, but I probably won’t. I mean, even if I weren’t spending the day writing and editing things because Blizzard likes to release lots of news at once, I still would probably not get around to my desk. I would like it… I just probably won’t.

Q4Q: Will you upgrade your heirloom armor to 110?

Probably not for a while. And even then, I really only keep my cloth items up-to-speed. People seem to think it’s weird that I’d level, say, my Hunter in cloth but like…I buy heirlooms for the XP boost. If all of my toons can wear the cloth ones, why invest more than I need to to get the full XP bonus? I have yet to run into any roadblocks with this method, and I’m going to keep using it until I do.

Better: Would you like to see an expansion WITHOUT a unified theme – like one just devoted to closing plot threads/setting up new story? I.E. – Dealing with Scarlet Crusade (resurgence?) / settling the dragonflights and helping them rebuild / random adventuring.

Yes and no. We soooort of got that with Cataclysm. I mean, yes, the leveling zones were tied together by the “elemental” theme, but it didn’t feel as cohesive as players (or Blizzard) wanted it to. The Vanilla rework felt pretty cohesive, though, but it suffered from not being max-level content (and therefore ignored by more than expected).

If Blizzard were able to give us a new leveling area — even a smaller one — and go back to old zones to redo them and wrap up some of the stories, I’d be all for that. Sort of like Cataclysm, but with a more unified approach to leveling content, and a smaller approach to redoing old content. Yeah, I really like that idea now that I’ve thought about it. Let’s make it happen!

D.VA-CHOP‏ (@ORKCHOP) IS THE DEVIL ON MY SHOULDER, ENCOURAGING QUESTIONABLE BEHAVIOR

Q4tQ: Why has there not been a Tentacle Buddy video game announced at E3 yet?

It’s not ready for release in the West yet :( — still needs localization work and extensive playtesting.

(Do not get me fired for including this, please.)

That’s all for today! Liz is basically the only other person who can fire me that’s in this week, so be extra nice to her and ask lots of questions. Also, discuss something other than tentacles. Like, uh… ninetacles! Ah ah ah, I amuse myself.

…But no, really, please leave questions.

Blizzard Watch is made possible by people like you.
Please consider supporting our Patreon!
Filed Under: Dark Humor
Advertisement