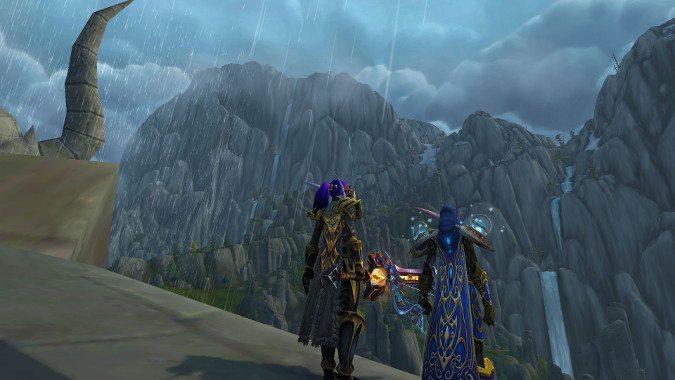 My wife and I got engaged during a Molten Core run. This weekend we’re celebrating our 11th year married with a trip to the mountains in Jasper. We will be spending time in a cabin, going for nature walks, and perhaps I may commune with my Sasquatch kin.

Hopefully y’all will have a good weekend in my absence.

Hey Matt, since you are doing this I think I’ll try to take advantage of it. As a fan of lore myself and an avid rper I often struggle to find ways to help new players I interact with get a handle on the massive amounts of lore in the game and expanded universe. Could you offer a list of your favorite tools for finding the lore of the game quickly? As well as content creators who provide information regarding lore (Aside from yourself/Blizzardwatch as a whole and that’s only because it’s an easy answer on this site. I send them to you guys anyway)

Okay, honestly, I tend to find the lore by playing the game, reading the quests, reading in game books, then reading out of game books and the old game manuals for previous games. I mean, I own a lot of books about Blizzard and its games — licenses media tie-ins like the novels, both Chronicle volumes (and that’s just for World of Warcraft, I have similar lists for Diablo) and I of course read other websites.

I don’t watch a lot of lore videos, although they’re very popular. Just not my thing. I know folks really like Nobbel’s stuff.

If I’m having trouble remembering a specific piece of information I usually hit up Wowpedia, and I like Scrolls of Lore to just browse around and see if anything hits me. If I were doing a list, I’d suggest getting the Ultimate Visual Guide and both Chronicle editions, then using this site, Wowpedia and Scrolls of Lore plus any videos you found enjoyable to watch. But for myself I prefer reading the novels and playing the game.

Hey Matt, What kind of story do you think that Blizzard is most missing from their games? Do you think that WoW could even support more story elements without having some of the population say “ugh rp”?

I’d like a strong Mother/Daughter story. It doesn’t have to be literally that — any two women in a mentor/student relationship would work, if it was told well. Aegwynn/Jaina would have been nice. I could go with seeing Shandris step out from behind Tyrande and take more or a role in Night Elf politics.

There’s also several female characters who just plain haven’t gotten enough time in game. Calia Menethil is in Legion but we know nothing of what she was doing all this time. How did she become a Priest? Why is she associated with a now-undead Alonsus Faol?

What’s Magatha going to do after the Legion is defeated?

It’s really kind of crazy we haven’t heard anything about Jaina this long, but y’all know how I feel about that one. So instead, what’s Modera’s deal? She’s been around since the Second War, so let’s hear more about her. Where is she from? How’d she become a Mage? Are she and Khadgar dating or what?

And what about Anduin Lothar’s secret daughter that I made up and who doesn’t actually exist in the lore but who I really want to be real?

Q4TQ: Anyone else think it was a poor idea for Lyessa Bloomwatcher to turn over Guardian of G’Hanir to a Feral druid who did the scenario just to collect the artifact?

Are you questioning Jennifer Hale? I think you need to rethink this decision on your part.

Honestly, the way they have to design quests, you’re going to end up with Fury Warriors getting an Artifact shield and them leaving it in their bags, Protection Paladins putting Ashbringer in the bank, etc etc. At least if you have it, it’s not in some demon’s pocket somewhere.

now that we have 12 class order halls, are we stuck with 12 classes until the end of time?

If Blizzard decides they want to do another class, they will. How will they get around Legion?

Well, one way is easy. They could start the new class at level 110+ bypassing all of the Broken Isles. What about players of that class who want to go back and do Legion quests? Either exempt them from all quests that require a Class Order Hall (which is relatively few) or simply make one for them. That sounds like a crazy amount of work, but the basic shape of the Class Orders are essentially the same, so while it would be a lot of work it would also be doable. I think exempting them would be the easier route, but it would be kind of cool if they put in Artifacts, a swank order hall and even cool NPC’s for you to interact with as you leveled.

Another possibility is make them have a leveling experience that makes Legion content count as already completed for them. Imagine if the new class starts at level 98 in their Order Hall, choosing their first Artifact, and by level 110 and the next expansion they’ve gotten all three, maxed them out and saved the Broken Shore from the Legion. You wouldn’t have to go back because Legion would essentially be compressed down into your leveling experience, much like original Acherus was for DK’s or Mardum was for Demon Hunters.

But if Blizzard ever decides they want another class, they’ll make one.

My Shaman is the character I PVP’d in BGs with most often back in the day. Her Sergeant Major’s Chain Armguards do not show up in her wardrobe. I assume this is because they’re considered part of the legacy PVP gear that’s locked behind old PVP ranks, which was impossible for her to get because she is a Draenei and the old rank system was removed before Burning Crusade.

A little annoying, but not that big of a deal. The problem is the shoulders I want for her are a unique model that ONLY comes from PVP vendors, Highlander’s Mail Pauldrons.

Am I going to be boned here again? Or is my assumption that I’m safe because the shoulders don’t have an intrinsic rank mentioned in their name correct? 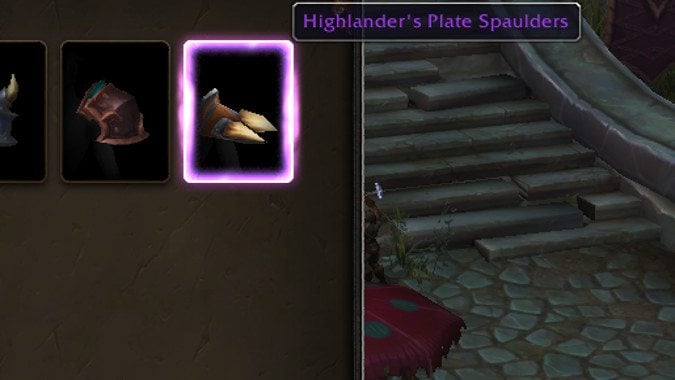 This is me on the Warrior I leveled from 1 to 100 using the pre-expansion demon invasions to grind out XP. She had never PVP’d at all, in fact I literally rolled her during the invasions in order to get yet another Warrior to 100 because I expected much elfishness in Legion. She has the plate version of those shoulders in her transmog and she can freely mog to them any time she wants to, despite having absolutely no PVP experience before this expansion.

You should absolutely be able to mog to those shoulders.

So that’s the Queue. By the time you read this I will be on the road driving to the mountains. I’ll tell Thorim you said hi. Anyway, consider this my obligatory I gotta hype my book somehow link, and I’ll see you guys next week.

Blizzard Watch is made possible by people like you.
Please consider supporting our Patreon!
Filed Under: Anniversary
Advertisement