Talon has had a presence in Overwatch since the debut of the game. During the height of the Overwatch organization’s popularity, many attempts were made to eliminate Talon as a threat. These efforts resulted in the death of Overwatch agent Gérard Lacroix, courtesy of his wife Amélie. Brainwashed by Talon, she returned to the organization as their most effective assassin, and took the name Widowmaker. Since then, Talon has continued to rear its ugly head in caper after caper — even after Overwatch’s disbandment.

But although we have plenty of information about what Talon has done, little was known about the story behind the terrorist group until now. Turns out, Talon isn’t run by one individual, it’s a council — and one of the biggest names on that list just broke his way out of jail.

Doomfist has returned — not the Savior, not the Scourge, but the Successor, and possibly one of the most dangerous enemies Overwatch has ever faced.

Doomfist isn’t his real name, of course. The current wielder of that weighty moniker is Akande Ogundimu, son of a well-known Nigerian family and heir to its prosthetic-technology company. Certainly Akande focused on the family business, but his free time was spent in competitive martial arts. Charismatic and highly intelligent — as well as incredibly skilled physically — Akande excelled in martial arts tournaments all over Africa, reading his opponent’s moves and using that uncanny ability to dominate.

But that idyllic future wasn’t to last, thanks to the Omnic Crisis. Akande was yet another victim of that terrible war. He lost his right arm in the aftermath, along with any dreams of continuing his martial arts career. While the family business allowed him to not only recover from his injuries, but also grow stronger, he was still unable to participate in the one thing he truly loved. Although he attempted to throw his efforts and concentration into prosthetic technology, it never really seemed to fill the void that the Omnic Crisis left him with.

Enter Akinjide Adeyemi — Doomfist, also known as the Scourge of Numbani. Who knows exactly what caught Akinjide’s attention, but he offered Akande the chance to fight with him as a mercenary. It wasn’t until later that Akinjide brought Akande into the Talon organization. Talon’s beliefs lined up nicely with Akande’s own — that conflict only made people stronger. As an added bonus, Akande’s skills as a businessman helped him navigate the stormy waters of Talon’s persistent power struggles at its upper levels. 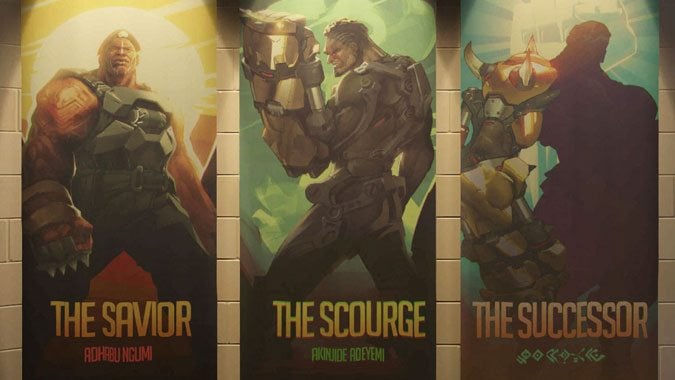 Certainly Akinjide was an asset to Talon — after all, the power of Doomfist wasn’t to be taken lightly. But it was Akande that eventually caught the attention of Talon’s top leaders. Akande wasn’t just skilled in combat, he was smart, charismatic, and almost a born commander in his own right. Akinjide was Doomfist, the Scourge of Numbani, content to terrorize the public and reap the rewards. Akande, however, had greater vision than that. {PB}

He also had ambition, drive, and the knowledge of how Akinjide fought under his belt. All of these things led to one conclusion: Akande killed Akinjide and took the name Doomfist for himself, along with the gauntlet. Numbani was free of the Scourge…but the world was now subject to the Successor. And Doomfist had plans for the world.

With that same cunning and drive, Doomfist and Talon concocted a conflict so great it would hopefully engulf the world. Yet before those plans could fully unfold, an Overwatch strike team consisting of Tracer, Genji, and Winston came to blows with Doomfist. And although he was skilled, he was eventually overrun by Winston, captured, and imprisoned in a maximum-security facility.

There, he waited. Patiently. 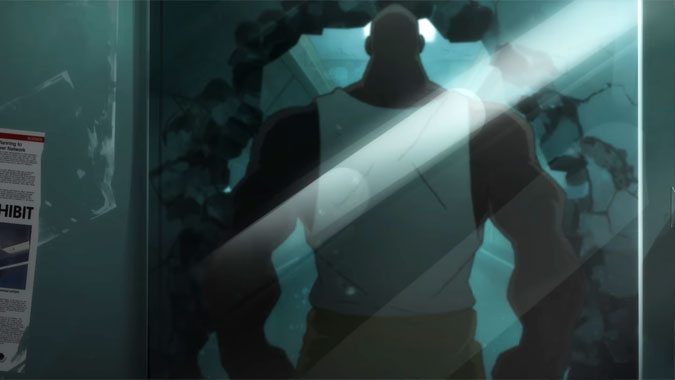 That’s the curious thing about Doomfist’s reveal cinematic. It’s made almost immediately clear that he could have escaped at any given point in time. He punched his way through a reinforced door, right out of his cell. Reaper was there to pick him up, but Reaper didn’t let him out of his cell — Doomfist was already free.

Here’s what else we know: Reaper and Doomfist have not worked together side-by-side before. They can’t have done so, according to the timelines. Doomfist was locked away while Overwatch was still active, before the explosion at Switzerland that supposedly left Jack Morrison and Gabriel Reyes for dead. So Reaper joined up after Doomfist was in prison — although, according to reports, there might be a Talon spy or two in Helix Security International, so they may have had some form of contact over the years.

Reaper’s been trying to get Doomfist free since day one of Overwatch’s launch announcement. He and Widowmaker were after Doomfist’s gauntlet in the original cinematic. They’ve been trying to get the gauntlet from Numbani, while carrying out other tasks on the side. Assaulting the Gibraltar facility in an attempt to hack Overwatch’s database. Mondatta’s assassination. The attempted assassination of Katya Volskaya. All of this, before releasing Doomfist.

What we’ve learned in the Doomfist reveal is potentially pretty huge — Talon isn’t just a random terrorist organization. It believes, just like Doomfist, that the only way humanity will grow strong is through conflict. Overwatch sought to put an end to conflict and usher in a time of peace — the exact opposite of what Talon wants to see. Overwatch met its demise because of conflicts between Reyes and Morrison, which leads one to wonder…was Reyes working for Talon before he became Reaper?

Think about it — Talon wanted Overwatch taken care of. Reyes was already upset because he’d been passed over in favor of Morrison for that leadership role. He was instead placed in charge of Blackwatch, a special ops unit that remained a secret from the public. So Blackwatch carried out many of the toughest missions, and got none of the accolades or recognition for it.

In fact, it was the existence of Blackwatch that was the crux of Overwatch’s downfall. The Japanese government filed a complaint that led to intense scrutiny and, eventually, a full investigation. That investigation led to the suspension of Blackwatch and its agents — a suspension Reyes seemed to be ignoring during the King’s Row Uprising. In Overwatch’s final years, Blackwatch was fully revealed to the public, along with a host of allegations including torture, coercion, kidnapping, assassination, and corruption.

Even if Reyes wasn’t working directly for Talon at the time, it’s possible they had some influence. Reyes was already on edge — any subtle encouragement towards rebellion wouldn’t have been ignored. And Talon had at least some knowledge about Overwatch’s operations — after all, they had Amélie Lacroix. Sure, she was never working directly for Overwatch, but it’s likely she still had some information she’d gleaned from her late husband.

Here’s the biggest kicker — Overwatch was all about stopping conflict, and bringing about global peace. Blackwatch, on the other hand, seemed to revel in conflict. In a world of global peace, exactly where would that leave Reyes and his men? Retired, obsolete, forgotten? Worse than forgotten — because nobody knew of their existence at all. Instead, the organization was clearly all about golden boy Morrison and his band of heroes.

One has to wonder if Doomfist’s long scheme, his orchestrated plan, had something to do with Overwatch. Perhaps that’s why he was content to sit in prison — he’d already begun planting the seeds of discontent. All he had to do was wait, and let Overwatch tear itself apart. From there, the world would naturally fall back into chaos, with greedy global organizations jostling for power without intervention. It was all a matter of time — and he had plenty of time, sitting in that cell.

While we don’t know what the future holds for Doomfist and Talon, we know that the global conflict is far from over. With Doomfist back on the scene, Talon has just become more dangerous than ever. Not just because of its actions, but because of what it represents. Overwatch represented that beacon of hope for peace once before, when the world teetered on the brink of destruction — will it be able to do so again?