Doomfist is now live in Overwatch 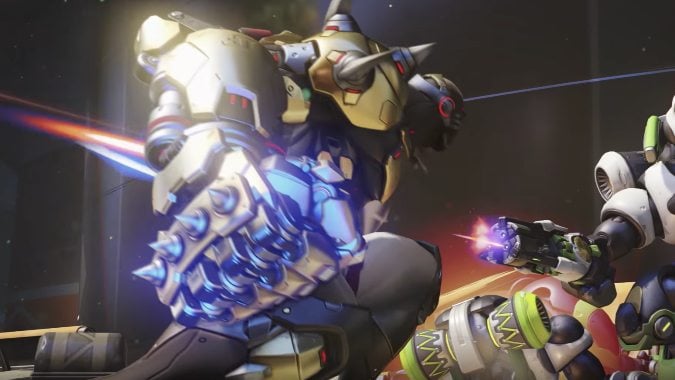 We’ve been looking forward to this day since the very first Overwatch trailer: Doomfist is finally playable in game. Stuck at work wishing you could play Doomfist? You can still read his comic and catch up on his lore while you wait.

And with this shiny new hero comes a shiny new patch, featuring loot box improvements and an updated highlight system (check out the developer preview video for more) plus some hero tweaks that include Reinhardt fixes. Check out the full patch notes below.

Originally Posted by Josh Engen (Official Post)
A new patch is now live on Windows PC, PlayStation 4, and Xbox One. Read below to learn more about the latest changes.

To share your feedback, please post in the General Discussion forum.
For a list of known issues, visit our Bug Report forum.
For troubleshooting assistance, visit our Technical Support forum.

New Hero: Doomfist (Offense)
Equipped with charisma and ambition, Doomfist is a consummate tactician and one of the leaders of Talon: literally throwing down his gauntlet as he joins the fight. From his base in Nigeria, Doomfist is a commanding offense hero equipped with hard-hitting melee abilities. Driven by a belief that conflict is essential to humanity’s progress, he’s committed to advancing his vision of the future—even if the agents of Overwatch disagree with his methods.

Doomfist’s cybernetics make him a highly mobile, powerful frontline fighter. His primary attack is the Hand Cannon; this four-shot weapon fires projectiles from Doomfist’s knuckles one at a time or in a single blast. With his secondary attack, Rocket Punch, he charges forward and delivers a devastating blow, knocking back any opponent it connects with and dealing extra damage if the enemy is hurled into a wall.

Seismic Slam smashes into a targeted area, knocking opponents toward him so he can deal further damage. His Rising Uppercut tosses enemies high into the air, while his passive ability, The Best Defense…, grants him shields every time he uses one of his abilities against an opponent. Lastly, his ultimate ability, Meteor Strike, causes him to leap high and drop into a targeted area, dealing massive amounts of damage.

Loot Box Updates
We always want the experience of opening a loot box to feel exciting and rewarding, and in our latest patch, we’re working to improve that experience in two key ways. First, we’re drastically reducing the amount of duplicates you will receive when opening loot boxes. Second, to compensate for this reduction of duplicate items, we’re also increasing the overall amount of credits you will receive from loot boxes. On average, you should be earning just as many credits, if not slightly more, from loot boxes as you did prior to these changes.

To learn more about this feature, check out our recent developer update.

Developer Comments: This change will make McCree’s Flashbang consistent against fast-moving targets like as Genji or Lúcio.

Developer Comments: Even though Shadow Step wasn’t intended to be used as a way for players to teleport right next to an enemy without their knowledge, the sound effects were audible from distances that made teleportation difficult from nearly anywhere. This change allows Reaper to be a bit more sneaky with his flanking options.

Developer Comments: In the last update, Reinhardt’s Rocket Hammer had an issue that allowed players with higher latency to swing faster. We fixed this bug, which suddenly made the swing speed feel too slow, so we’re compensating by increasing his standard swing speed. During this process, we also found and fixed a few bugs with Rocket Hammer’s hit registration. Overall, the hammer should feel much better.

Developer Comments: In the past, the abilities that allowed heroes to escape Zarya’s Graviton Surge felt fairly arbitrary. We’re cleaning this up and increasing Graviton Surge’s overall power by rendering all movement abilities unusable when an enemy is trapped.

Blizzard Watch is made possible by people like you.
Please consider supporting our Patreon!
Filed Under: Doomfist, Highlights, Loot Boxes, Reinhardt
Advertisement