The Overwatch PTR is live with Junkrat buffs and Deathmatch mode 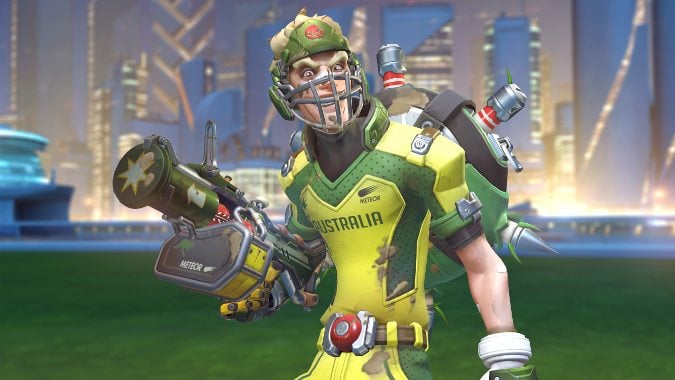 After a developer update video from Jeff “Jeff from the Overwatch team” Kaplan was released earlier today, we figured another PTR was waiting in the wings. It was! We were excited enough about the Deathmatch he discussed that we wrote a whole post about it. It’s coming with a new arena, Chateau Guillard, where we can visit Widowmaker at home.

Beyond that, Junkrat is getting some big buffs. Charges added to his Concussion Mine means he can leap over just about anything by chaining them. His RIP-Tire’s timer doesn’t count down while he’s wall climbing, making for some shenanigans. Orisa also sees some love with a larger barrier, while Roadhog got some buffs to his healing, for some reason. Lastly, while we’re stomping through her garden and mussing the fancy towels at Chateau Guillard, Widowmaker is getting a new way to see through walls. Make sure you use a coaster on her dead husband’s favorite coffee table, please.

Two new game modes have been added to the Arcade: Deathmatch and Team Deathmatch!

In Deathmatch, eight players go head-to-head until one player scores 20 points. Players will earn 1 point whenever they land the final blow on an opponent and will lose 1 point whenever they die to environmental damage (ex: falling off a cliff) or self-inflicted damage. This scoring will be tracked in a brand-new scoreboard. The first player to 20 points wins!

In Team Deathmatch, two teams of four players face off until one team scores 30 points. Players will earn 1 point for their team whenever they land the final blow on an opponent and will lose 1 point for their team whenever they die to environmental damage (ex: falling off a cliff) or self-inflicted damage. If players are resurrected before they respawn, the corresponding point for their death will be deducted from the enemy team’s score. This scoring will be tracked in our default scoreboard. The first team to 30 points wins!

Both modes will play out on a selection of maps from our existing pool:

We’ve made several modifications to many of these maps (including restricting play to a specific area and developing a special respawn system) when playing in these modes. We’re also introducing a brand-new map specifically for Deathmatch: Château Guillard! Learn more about this map below.

Both modes will be available for play in Custom Games.

Château Guillard is located near Annecy in southeastern France. For hundreds of years, it was the estate of the influential Guillard family, until it gradually fell into disrepair after the family’s power waned in the decades after the Revolution. Recently, the château has found a new owner: the Talon agent Widowmaker, who has returned to her family’s ancestral home.

Developer Comments: Over the past few months, we’ve been working on a number of significant under-the-hood changes that will help us streamline the patching process. This will allow us to reduce the download size in future patches, but it does mean that today’s patch is larger than a traditional patch.

Developer Comments: Giving the Junkrat the ability to store two concussion mines adds some much-needed flexibility and versatility to his kit, particularly when using the mines for mobility. RIP-Tire’s damage has always been very good, but it was often difficult to steer the tire into position before it was destroyed. Increasing its speed will allow players to effectively detonate the tire more often and decrease the amount of time that Junkrat is vulnerable while controlling it.

Developer Comments: The projectile speed increase helps Orisa’s consistency, especially at medium ranges (or further). Her barrier size has been increased to better protect her team, and the new shape makes the shield more effective when it’s used on slopes or on top of objects (such as a payload).

Developer Comments: These changes help Roadhog be much more aggressive when looking for hook targets or blocking for his team. The combination of these effects significantly increases Roadhog’s sustainability and survivability.

Developer Comments: Widowmaker is extremely powerful in the right hands, but her abilities often felt a little weak. The Grappling Hook cooldown reduction means she is more likely to have it available when she needs to escape. Venom Mine is intended to be an early warning system, uncovering enemies that are attempting to flank her or her team. With this change, she can see enemies when they trigger the mine, even if they’re on the other side of a wall.