The name Windrunner is a well-known one on Azeroth. Sylvanas is easily the most recognized. After all, she was Ranger-General of Silvermoon, then leader of the Forsaken, and now leader of the entire Horde. Her younger sister Vereesa built a name for herself as well, though not quite as prominent. Vereesa avoided Kael’thas’ teachings and the fel that stained the eyes of her kin. Eventually she founded the Silver Covenant, serving as its Ranger-General and leading those High Elves that remained uncorrupted and loyal to the Alliance.

The third Windrunner sister may not have been as influential in matters of present-day, but her name lingered on in her absence. Who, after all, could forget Alleria Windrunner, when her statue flanks the very gates of Stormwind? But though anyone entering the city would know her name, few people know the real Alleria.

As the eldest of the Windrunner sisters, one might have expected Alleria to do more with her life. She was supposed to inherit her mother’s role as Silvermoon’s Ranger-General, but she didn’t take it. Instead, she turned away from expectation and tradition, joining the Farstriders and leaving the position to her younger sister, Sylvanas. Her name and status among her people mattered little to her. Protecting those people was far more important.

And nothing was more important to her than her family and those she loved. Despite turning down the role of Ranger-General, Alleria loved her family with all her heart. It was reflected in the necklace she wore, an exquisite piece with three stones — emerald, ruby, and sapphire — and in how fiercely she fought.

Eventually, she’d rise to her own brand of fame defending her homeland during the Troll Wars. It wasn’t just the skill she proved in combat that earned her reputation — it was the sheer number of Trolls she killed in during the war. Alleria was no noblewoman, concerned with rank and prestige. She was a huntress, a warrior, a fighter — and she’d kill without reservation if it meant preserving the lives of those she loved. 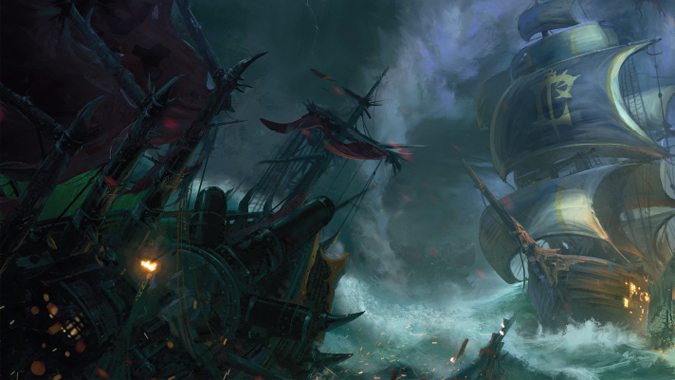 Her disdain for expectation and tradition continued into the Second War, when the Alliance of Lordaeron sought out allies to help fight the Horde. One of these allies was procured solely through Anduin Lothar’s connections. As the last descendant of the Arathi bloodline, Lothar called on the High Elves for aid. The High Elves, unconcerned with the perceived threat, sent a mere pittance of troops to help.

But Alleria saw the Horde for what it was, and she believed it a legitimate threat to her people. Although she’d received no orders to do so, she traveled to Southshore to join the Alliance. There, she worked to expel the Horde forces from Lordaeron — and her cleverness and prowess in combat didn’t go unnoticed. But despite their best efforts, the forces didn’t realize that the Horde were set on Quel’Thalas until it was too late.

Alleria and the others rushed to defend the forests, but the Horde had already begun their attack. After reuniting with her sisters, Alleria returned to Silvermoon to inform Anasterian Sunstrider and the Council of Silvermoon of the attack. Both Alliance and elven forces fought valiantly to defend Quel’Thalas, but neither could predict what happened next — dragons. The Horde had dragons at their disposal — somehow — and the forests went up in flames as a result.

Although Alleria desperately wanted to stay, there was little sense in doing so. There was nothing she could do, and Lordaeron’s capital was in danger as well. With newfound resolve, Alleria left to continue her fight alongside the Alliance…unaware that tragedy had befallen her beloved family in the wake of the destruction. 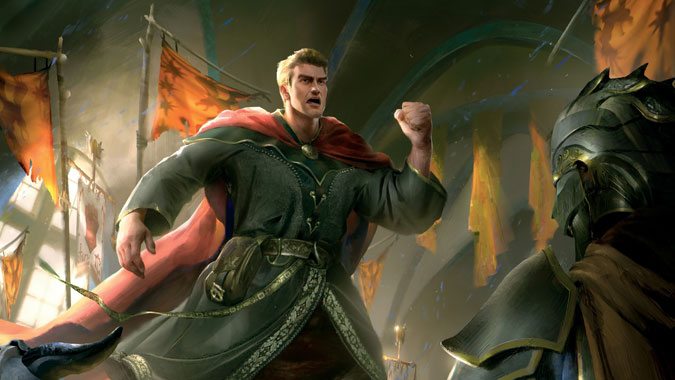 Throughout her travels with the Alliance, one Human in particular caught her attention. Turalyon was almost immediately enchanted with her — not just for her otherworldly beauty, but for her confidence, grace, and skill in combat. Despite his apparent confidence on the battlefield, Alleria left him near-speechless and nervous. Despite his initial discomfort at her presence, the two grew close as her time in the Alliance went on. {PB}

They worked well together — Turalyon was, in his own way, as fiercely devoted to the idea of protecting others as she was. Where she was fire, he was compassion. The two shared an appreciation for common sense and a practical nature that overruled hasty decision-making. It was Turalyon who brought her to her senses on the borders of Quel’Thalas, pointing out she’d do no good if she went back and died.

And it was Turalyon, one rainy evening sometime later, that took her in his arms and comforted her, though he knew not what had hurt her so. All he knew was that she was upset, uncharacteristically so. He would move mountains to take away that hurt and pain — he’d do anything for her. In the morning she was gone, and he learned the truth of it.

She’d just returned from a scouting mission. According to reports, on that mission she learned from Quel’Thalas that no less than eighteen of her kin had died. Cousins, aunts, uncles, nephews…and her younger brother. But when he tried to speak to her about it, she brushed him aside. It was as if that vulnerable woman from the night before was entirely gone, replaced by someone new. Someone hardened — and harsh — not the friend and lover he knew.

After the Horde was defeated in the Second War, she left both Alliance and Turalyon behind. 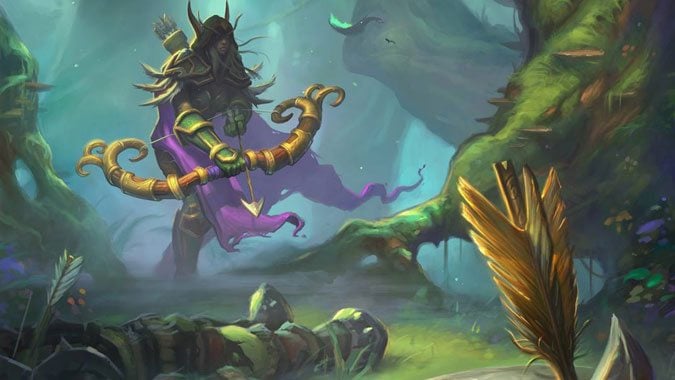 Alleria struck off on her own, haunted by the condemnation of her own thoughts — she had failed. She failed to protect her family — she failed to protect her brother. She wasn’t there with them — if she had been, perhaps she could have saved them. But they were gone, and there was nothing she could do to bring them back again. She could, however, have her revenge. The renowned killer of Trolls set her sights on a different target — Orcs. And she hunted them down and killed them with a single-minded vengeance that was almost unnerving to her former comrades in arms.

Khadgar reached out to his old friend, filling her in on the situation at Nethergarde — the Dark Portal was about to reopen. Action needed to be taken. Concerned with Alleria’s cool distance after the Second War, he sent her to inform Turalyon of the activity. Alleria wasn’t happy about the errand, but left as requested. After all, if the Dark Portal reopened, she’d have many, many more Orcs to add to her kill total.

Alleria was willing to go through the Dark Portal, but for different reasons. While Turalyon wanted to prevent the Horde from assaulting a multitude of worlds, Alleria simply wanted to decimate the Orcs and prevent their return to Azeroth. But it was enough of a reason to suit her — and perhaps in a way, it was escape from the guilt and grief that still plagued her.

It was a journey from which she had determined she probably wouldn’t return. With that in mind, she had her parent’s treasured necklace melted down and crafted into three lockets. One for her, one for Vereesa, and the last for Sylvanas, each etched with a message of her love for the sisters she thought she’d never see again. 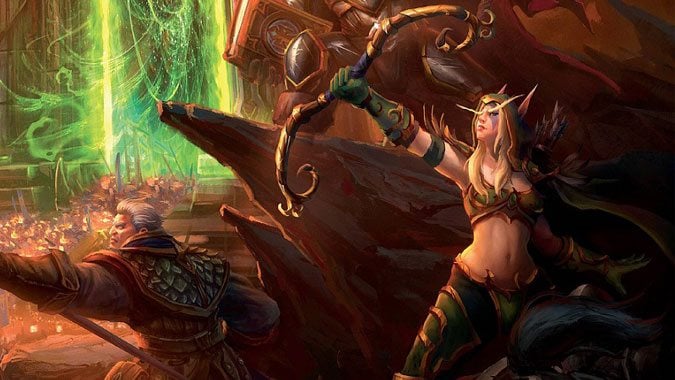 Beyond the Dark Portal

Once on the other side, Alleria’s iron will returned with a vengeance. She consistently threw herself into dangerous situations, fighting with a savagery and willful carelessness that alarmed Turalyon and Khadgar. And she argued, exhibiting an impatience that finally caused Khadgar to snap and tell her what she wouldn’t admit to any of them. She didn’t come with them to fight; she came with them to die.

Eventually, the tension built up enough that Turalyon confronted her as well. He gave Alleria an order to stay behind in charge of Honor Hold while everyone else went to battle. She balked at the idea of it, arguing that she was needed on the assault. Turalyon snapped, asking if Lirath — the brother she lost — would have wanted her to throw her life away. Stricken, Alleria finally admitted what she’d tell no one else — that she was mired in vengeance, because it was the only thing that pushed the pain away.

The Alliance Expedition failed in their efforts to stop Ner’zhul from opening his portals on Draenor. But they managed to escape with their lives. And when Turalyon disappeared, some three years after the group was stranded on Outland, Alleria vanished right along with him. 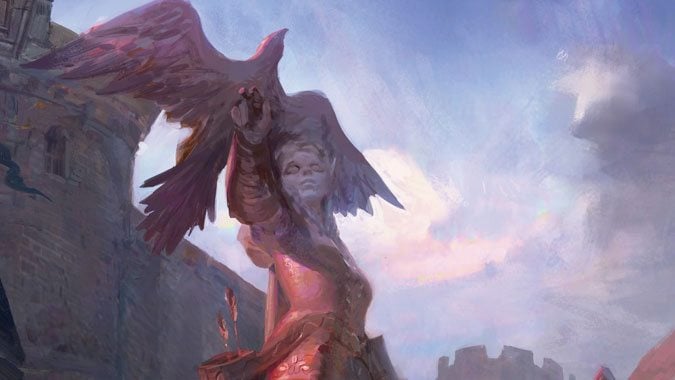 Alleria Windrunner may not have been the most well-known of the Windrunner sisters, but her contribution during the Second War would never be forgotten. She was immortalized in stone with the rest of the Alliance Expedition after they disappeared beyond the Dark Portal, presumed deceased. She left behind her sisters, and her son — but never lost the love she had for all three.

Alleria and Turalyon complement each other in combat and in life — protectors to the end, albeit from slightly different angles. Turalyon represents the pure compassion and righteousness of the Light. Alleria matches it with the ferocity of a huntress, fighting for the safety of her loved ones and her family no matter the cost.