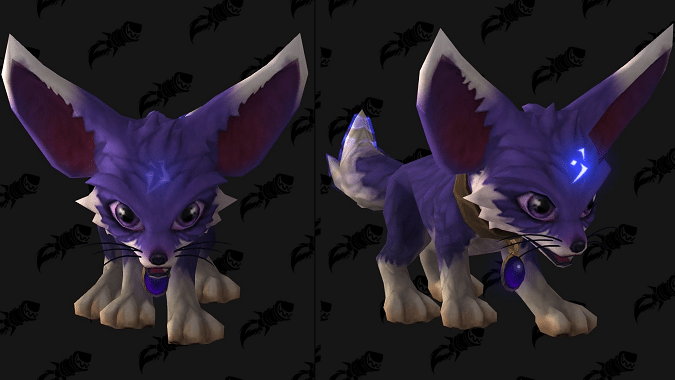 Update: Shadow is now on the in-game shop and Blizzard Store! Your new best friend costs $10 (or €10 for EU players), and 100% of proceeds from now until December 31 will be split evenly between the American Red Cross Disaster Relief and the International Federation of Red Cross and Red Crescent Societies (IFRC) Disaster Relief Fund.

A surprise came to WoW in the early hours of the morning today — that surprise, if you somehow haven’t figured it out, was Shadow the fox pet. While the adorable little vulpes isn’t available just yet, it is listed as an In-Game Shop pet. Given the sudden appearance of the pet alongside the multitude of recent fundraising, it seems likely a portion of sales will go toward aiding victims of the recent hurricanes.

Shadow the fox — not to be confused with Fox the Shadow Priest — alternates between Light and Shadow forms, and this is mirrored in his battle abilities which have a Light and Shadow option for each ability slot. Why exactly does he alternate? Let’s turn to this little guy’s Pet Journal entry:

Lost on Argus and overtaken by darkness, this playful fox can shrug off the void just by being by your side.

Now, I can’t say I don’t take offense to the idea of Void being something that needs to be “shrugged off,” but the fox is cute enough that I can forgive it. Also, Glyph of Shadowy Friends is going to make it all Shadow all the time, so… take that!

If you want to see this in action — along with a fuller look at the model and its animations — Wowhead has you covered:

Don’t worry, Shadow, I’ll keep that Light away from you. What about you? Do you think you’ll be getting one of these adorable critters? As a Priest, it’s practically mandatory — but the cuteness factor isn’t exactly a deterrent.

Blizzard Watch is made possible by people like you.
Please consider supporting our Patreon!
Filed Under: No Not THAT Shadow Fox, Red Cross, Shadow, Shadow Fox, Shadow Pet
Advertisement