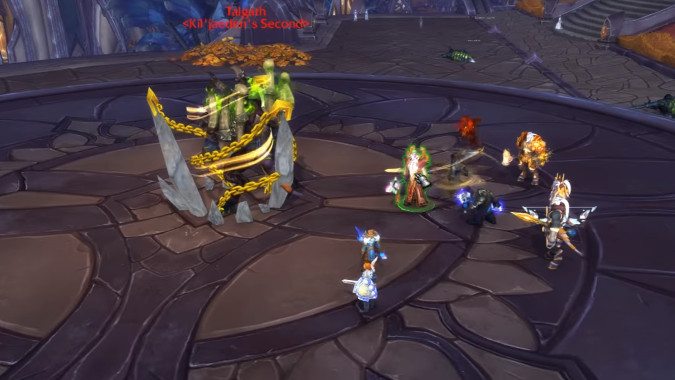 I got chills when Velen finally got a measure of justice on Talgath, the Eredar who betrayed him and his family into Kil’jaeden’s hands and led Kil’jaeden’s forces up the mountain to capture Velen and the Draenei seeking to escape. Powerful moment.

This is the Queue. Let’s look at some questions.

Q4tq: The above “what’s next” question got me thinking about things like Kul Tiras, should it be a hub, and if so whose, so here’s the poll:

Do you prefer expansion hubs to be like Shattrath/Dalaran, with everyone together? Or Vale Shrines/Ashran towns, separated?

The short answer is that I don’t really care. But that’s boring. So I’ll instead say that I think the whole faction divide is played out and I’m generally in support of anything that doesn’t emphasize it, so I’m down with a more Shattrath approach where Horde and Alliance mingle. I’m not even all that fond of the Dalaran approach where there are Horde and Alliance sections of the city.

I say this but if Kul Tiras became a hub in the next expansion, it would make no sense for the Horde to be allowed anywhere near it. Even though I just said faction divides are played out, there’s no way to make that worse. It would be like rebuilding Theramore and letting the Horde in.

Q4tQ: Do we know, other than the WoW mounts, what the other in-game (OW, SC2, D3, HotS) rewards are for the BlizzCon ticket?

As far as I can tell, no. The BlizzCon goody bag is known, and the WoW mount, but if there are other in-game rewards for other games I don’t know what they are.

You know, maybe I’m just slow on this, but something hit me the other day. I assumed the reason Blizzard decided to rename Battle.net to just Blizzard was because of a wet-behind-the-ears marketing exec who thought he knew better.

I don’t understand why they would do that. Sure, the name of the company is Activision-Blizzard but it’s not like anyone confuses the two very much. Maybe you’re right but I don’t see it. I could see an argument that Activision-Blizzard would want the most recognizable name possible for a service like that (I’ve written about this) but by that token why not go whole hog and name it the Activision-Blizzard launcher?

I think in the end they stayed Battle.net entirely because it is so entrenched a name and identity with over 21 years of history.

I asked this on the NetherlightCrucible article page but didn’t get an answer.

The way I plan to use this is by unlocking my relics. I don’t see the drawback to this. I am sure there is a drawback or others would not be upset (well others here, not others on the forums where being upset is a daily quest) but – what am I missing? Why can’t you just keep the relics you have and unlock them?

It depends (as many responded) on what you’re doing in game. For someone like me this is perfectly acceptable — I don’t raid much and I’m not trying to min-max like in the old days. Not getting the best possible upgrade on my relics is not a concern for me. But for players who enjoy min-maxing or do a lot of Heroic/Mythic raiding, it becomes a concern partially because it’s yet more randomness when RNG can stall your progress.

Okay, n00b question: I finally got a second legendary last night (KJ’s Burning Wish, yay!), but the game told me no dice when I tried equip it on the grounds that I already had another legendary equipped. I know that a second legendary slot was supposed to be unlocked when you finished your class hall research but I thought they removed that when 7.3 hit. Is that still a thing?

Just out of curiosity: quick show of hands, how many of us have fallen down that random bottomless pit beside the City Centre warp point on Mac’Aree?

Okay, all the time.

Blizzard Watch is made possible by people like you.
Please consider supporting our Patreon!
Filed Under: Velen
Advertisement