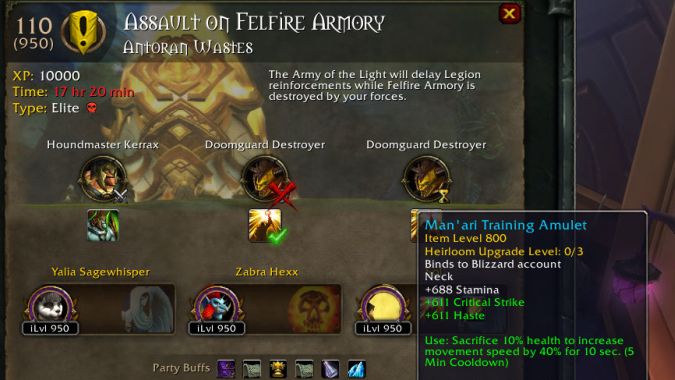 Well that was timely. The latest round of WoW hotfixes was released last night, and directly addresses issues encountered with Lightforged missions. As we discussed in a post the other day, it wasn’t really effective to complete the quest chain. The rewards weren’t as good, and the success rate was lower to start. This left the net effect of spending more Order Resources and time to get less stuff.

Apparently Blizzard realized this, as the latest set of hotfixes appears to have taken that in mind. The final tier of Argus missions are now less difficult, and reward more Veiled Argunite and bonus Gold. In addition, players no longer need to complete The Seat of the Triumvirate to get started on follower and mission progression.

Whether this fixes the issue entirely remains to be seen — we don’t have the exact numbers just yet. But it seems like Blizzard was listening, and took steps to take care of the issue. After all, I’m pretty sure they don’t want us to deliberately avoid doing quests. It’s a little counterproductive, to say the least. Read on for the full — if brief — list of hotfixes.