The Queue: Still the prettiest 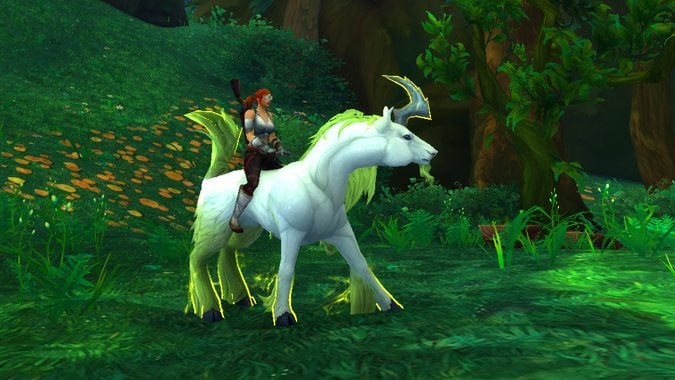 I finally got the Wild Dreamrunner the other day. It is exactly as majestic as I’d hoped it would be. Now I’m trying to figure out how to make a transmog that goes with it — that yellow green might look nice on the mount, but not so much on my character.

Yes, I am that ridiculous when it comes to new mounts. But let’s just let that slide and get to your questions instead, shall we?

Q4tQ: can Gilnean Worgen (after going through their “balancing cure” in Tal’doren) spread the curse via biting anymore, or is it just through drinking blood?

What the Worgen got in Tal’doren wasn’t really a “cure” so much as a way to manage their condition. The Gilneans came up with a partial cure that allowed those afflicted with the curse to retain their sanity while transformed. The Night Elf cure went one step farther, allowing those that had been afflicted the ability to change their shape at will.

However, neither of these things actually got rid of the curse. So being bitten or drinking the blood of a Worgen will still spread that curse. However, the curse isn’t a genetic thing — Worgen offspring aren’t automatically Worgen, they’re just Humans, born without the curse.

Do we know where Alleria got the bow she’s using since Marksman Hunters have her old bow?

That’s an excellent question! And…I don’t actually have an answer for it. We know she lost the bow while she was imprisoned along with the Locus-Walker on Niskara. That’s where Marks Hunters find it during their Artifact quest chain. After that, she went back to the Vindicaar and was promptly locked up — and I don’t think the Army of the Light would just hand over a bow to a prisoner. Presumably they let her go at some point, and she was supplied with a bow. Either that or she managed to pick one up off of a demon corpse somewhere, or she simply made her own.

What will happen to Dalaran after the expansion? Think they’ll move it again in the future?

Well, it doesn’t really have a reason to stick around in the Broken Isles once we’ve finished kicking the Burning Legion to the curb. It doesn’t really need to be in Northrend, either — at least, not yet. I’m not sure if they’ll relocate it or not, though. It depends on whether or not they’ll be using the city in the next expansion — after all, Dalaran hung around in Northrend long after Wrath was over. {PB}

Honestly, I’d still love to see it settle in the place where Theramore once stood. I wanted to see that when Jaina became leader of the Kirin Tor — sort of a warning to the Horde. You destroyed our city? Here’s a bigger, deadlier one. Jaina took her leave at the beginning of Legion though, and I don’t know if she’ll be making a return once the expansion is over or not. I hope so — she was supposedly destined to lead the city according to a prophecy that Vereesa found. Khadgar was the one who told her about it. It seems silly that she was only allowed to lead for an expansion or two and then just…go with no objections from anyone.

I mean, Jaina’s got her issues, but it’s odd that she’d just desert her post and do nothing with the Burning Legion looming. She played a pivotal role in the Third War — she knows what the Legion is capable of. But that’s Jaina, that’s not really Dalaran. I think Dalaran’s probably just going to stay put until it’s needed again, unfortunately. I like the idea of a traveling city, I wouldn’t mind seeing it pop up elsewhere every now and again.

LoreQ4tQ: In the last lore podcast, it was noted that the Light sees one, true path, and that is the path that must be followed. Shadow/void sees thousands of potential paths, and that is ultimately what causes insanity, too much knowledge of what the future could be.

Do you think that those who see all of the paths that the void shows them also see the one path the light sees, as one of those mixed in? Or are they completely blinded from that option?

From what we’ve been told, the Void sees everything — every path, all at the same time. No one path is more or less “correct” than the other. They’re all true, simultaneously. I think that’s the part that drives people to madness — logically, if one thing is correct, another cannot be correct. The Void says it is. Having your head crammed full of a million million possibilities that you absolutely can’t logic your way out of or wrap your mind around is enough to push anyone to that extreme.

To the Void, the Light’s path isn’t the “true” path because they’re all “true.” Alleria’s managed to ferret her way into a balance between the two that allows her to kind of filter and process what she’s seeing — maybe the Locus-Walker did the same? We still don’t know that character’s story. I’m hoping we’ll see it in full eventually. I’d really dig a novel that tells the story of the Ethereals.

@GOBAK2SLEEP ASKED VIA TWITTER:
Would you like to see some rng removed? Legendaries, follower missions or rare drops with special items (pet/mount/toy) all bothered me.

You know, I finally got a legendary for my shadow priest the other day, and it…didn’t really feel particularly special at all. I think that’s when it really hit me how cut-and-dry they’ve made the process. I hate to sit here and be all “Let me spin you a yarn ’bout the good ol’ days,” but I liked it when we had to work for legendary items. I think my favorite is still the cloak quest chain from Mists, but Thunderfury is a close second.

Each of these chains had RNG elements to them, but they also had epic and vastly interesting stories, too. With the cloak in particular, sure you were farming drop items for Wrathion. But you were also helping him out in scenarios, picking up raid drops, and watching cool scenes in between it all. It made it feel like you were really accomplishing something.

Thunderfury was a little different, because of course the bindings were RNG. But the completion of that chain, the moment you first summoned Thunderaan out there in Silithus…man my guild went absolutely bonkers over that part in vanilla. Even when I eventually soloed the chain years later on my Rogue and killed him solo, it still felt monumental, in a way.

I guess I’m just kind of burnt out on grinding mobs and hoping for a drop, or grinding rep and hoping for a drop. I’d like to be able to work for something and have it feel like a reward, rather than my lucky day, you know? Side note — of the two beautiful ponies we’ve been given, I vastly prefer the Lucid Nightmare. I liked the puzzle solving aspect, even if the Endless Halls were absolutely maddening.

For sometime now there’s been mention of needing / getting a kazoo for the podcast. Has this been aquired yet?

No! …I should really get on that, shouldn’t I?