What lengths have you gone to in order to kill a boss? 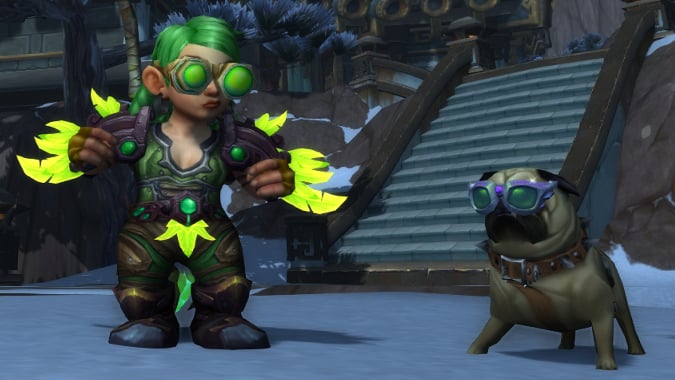 Sisters of the Moon is a very pretty fight. There are so many lights and colors everywhere, the moon is slowly waxing and waning through the room, it’s a lovely purple color all around. The room itself is a testament to the beauty the temple once held. Unfortunately it can also be murder on the eyes. Those tight quarters with enclosed walls make camera angles a nightmare.

On Mythic difficulty, the tanks are constantly moving the bosses across the room as the moon moves along the floor. People are staring to find their spot and make sure they cross over at the right part. And the floor is incredibly bright at times. The other night one of our tanks decided to take matters into his own hands and deal with the cacophony of flashy lights and visuals by using an external aid. The key to dealing with the influx of brightness? Sunglasses. It was dark, but he made it through the fight, leading him to announce that sunglasses are the “new raid accessory.”

He’s not the only one to get creative while raiding. Back in Wrath of the Lich King, my good friend and co-GM used to keep post-it notes on the sides of his monitor to remember important bits of information about the fight or which groups were where. In Nighthold, our other tank set up groups for Mythic Krosus using a napkin. Sure, we have guild spreadsheets and fancy technology, but the napkin was right there and just so handy. That napkin got us through a lot of attempts and finally a kill.

What about you? Any fights that you take certain measures to cope through? What have you done to eke out a raid kill?