The Queue: I bring you glad tidings of giveaway winners 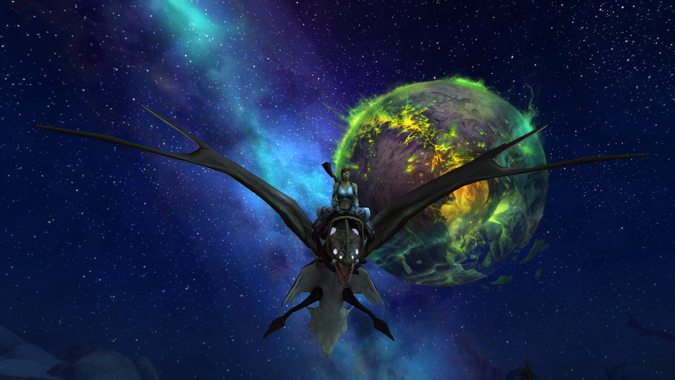 This is my favorite mana ray because it looks a bit like a flattened orca that has inexplicably learned how to take flight. But this not-a-flying-orca is here with an announcement — we’ve picked our winners for the BlizzCon 2017 Virtual Ticket giveaway! Congratulations to Silisil, Eade Safel, James Stanek, and Beardman on the Virtual Ticket and all associated virtual goodies. If you haven’t already, make sure you check the email you use for Disqus in order to claim your code.

Now let’s get to your questions, shall we?

Q4tQ: Where are all the High Elves? The Silver Enclave in Dalaran was (seemingly without any explanation) given to the Gilneans in Legion so where are the Silver Covenant hanging out nowadays?

They’ve been on the move — keep in mind a large chunk of the Silver Covenant were involved with the events on the Isle of Thunder in Pandaria. While we don’t exactly know where they’re holing up now, they obviously have somewhere to go. Plenty of High Elves showed up to help out in Suramar as well. They could still be stationed down there, helping the Nightborne clean up their city now that Elisande and the Legion have been ousted.

This will be my first time at Blizzcon. Any helpful hints you can give me about preparing? What to pack, what NOT to pack, things like that.

Comfortable shoes — you’ll be doing a lot of walking out there. Something to snack on, either granola bars or those little peanut butter and cracker packs, small and portable, essentially. I also recommend taking a water bottle. Asprin or Advil always comes in handy (all that aforementioned walking and running around can make one achy) — and I like to make sure I have bandaids on hand, too. And sunscreen. Don’t forget the sunscreen! {PB}

Pack for warm weather, but bring at least one overshirt or light jacket with you. You will not need a heavy coat. Trust me. Don’t forget chargers for any electronics you happen to be taking. Get an extra battery pack for your phone, cell signal in the convention center is usually so-so and you’ll find your battery drains pretty quick! Also, be prepared to take pictures, there’s a lot of cool stuff to see in the convention center, and tons of amazing cosplay on top of that.

Don’t worry too much about bringing anything to keep yourself amused in down time. There is no down time, there’s always something to do. If you think you’ll be making some purchases while you’re out there, make sure you leave room in your bags. And if you do happen to forget anything essential, don’t worry — there are several stores within walking distance to the convention center that carry just about everything under the sun.

Q4tQ: What do you do with all those excess apexis crystals? I have nearly 500k on one character, and no alts that need equipment. Is there a most profitable thing to spend them on?

There’s not really much to spend them on, now that we’re no longer in that expansion — if you have all the pets, mounts, and toys, I’d say picking up extra reputation pets wouldn’t be a terrible idea. They cost Apexis and gold, but you can cage them after you’ve learned them, and put them on the Auction House. It’s not really going to make you a lot of gold in the long run, though.

Personally, I tend to ignore old currencies for the most part. They cease to be relevant — thankfully, they no longer take up any bag space, so they can be safely ignored.

Q4tQ: Is there a game (or game franchise) more than 10 years old you want to bring back, either as a remaster or as a new addition to that series?

I’d say Secret of Mana, but we’re already getting that one. I wouldn’t mind seeing a full revamp of the Lunar: Silver Star Story series. It was kind of goofy in places, but I thoroughly enjoyed playing it. And because I was reminded of it the other day — I’d love to see a revamped mobile version of Lemmings. That game was totally infuriating at times, but really, really fun. Along the same lines, an overhauled Lost Vikings would be pretty fun.

I’d also dearly love to see a return of the old point and click adventure games. One of my favorites (besides you know, classics like Monkey Island) was Simon the Sorcerer. You played Simon, a sometimes-snotty 12 year old kid who had to become a wizard. Hi-jinks ensued. It was great.

Q4tQ – especially Anne: What’s the future of Warlocks? I used to love playing my Redlocker, but as I’ve delved more into the lore and history of the game, I just don’t enjoy playing her as much. I feel guilty because most of this mess is her fault. And now we are in Argus trying to rid ourselves of the demons forever – will we even have access to our minions. Will the rest of the Alliance and Horde finally throw us out?

From a realistic standpoint: Nothing. It’s been an established class since day one, and despite everything that’s been going on in the story, Blizzard is not about to get rid of a class that so many people thoroughly enjoy playing. (Including me, on occasion!) It wouldn’t make any sense — it’d just make a lot of players very, very annoyed. For good reason.

From a story standpoint: The factions aren’t exactly gung-ho about the idea of mucking around with fel magic or demons, no. But sometimes the best way to defeat an enemy is to thoroughly understand it, and use its own weapons against it. Demons didn’t just pop into existence with the formation of the Burning Legion — Sargeras was imprisoning them long before he turned away from the Pantheon. They’re still going to be out there. We’re trying to defeat the Legion, we’re not trying to wipe out all demonkind. There will still be demons left after the Legion is gone, and we’ll still have to fight them from time to time.

Q4TQ: BlizzCon eSports starts Thursday, do you plan on watching?

I’ll probably glance over and watch a few events if I have time — they’re fun! And as a side note, if people are wanting to watch streamed events, we’re set up to host streaming events on our Twitch channel, if you’d like to watch with a much quieter chat window. Check out last week’s esports post for more information on everything we’ll be seeing from the assorted BlizzCon events.