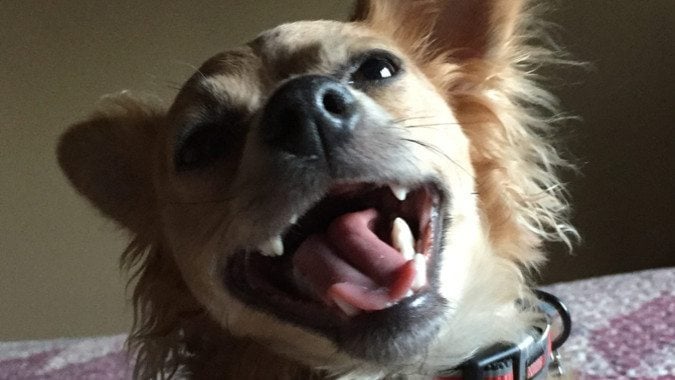 I moved last week. It was awful. Just awful. Didn’t sleep for three days, the people upstairs initiated a chain of events that led to my stuff getting smashed and the cops called out by us, just a horrible experience all told. Frankly we’re both a bit nervous about continuing to live here.

So instead of trying to be funny or clever this week, we’re just going to get to the questions. I’m going with a happy picture of my dog for the header because I could use the mood lift.

Is there just one hidden artifact weapon appearance per spec?

Yep. Just the one per spec, each with their own means to unlock them. I still haven’t gotten that damn cave to yell at me for my Protection skin.

Q4tQ: Blizzcon is fast approaching. Is hype real yet? If not, is it at least within the realm of possibility?

BlizzCon is one of those moments that’s come to define my professional life over the past decade even though I’ve never been to one. I first started writing about Blizzard and its games in 2007, and so I’ve watched with a touch of envy as BlizzCon after BlizzCon has rolled by. I didn’t buy tickets to this year’s BlizzCon because I had no idea if I’d be able to travel or not — I knew I was trying to get my Permanent Residency but I had no idea if I would have it by the time the con rolled along. It turns out I got it this month, and so, I could have traveled to LA for it. But that would have been a very expensive gamble had it turned out I couldn’t, which was the far more likely outcome. So I didn’t get tickets and won’t be going.

As a result every BlizzCon is for me a series of moments of wistful regret mixed with the hype and excitement, and for me the hype is always real.

I’m already somewhat hyped for next year, because I’ll finally be able to go to that one.

If you’re hyped now, good. If you were hyped four months ago? Still good. Be as hyped as you like, whenever you like. The hype is always real.

Q4tQ: This wasn’t even on my prediction/suspicion radar until I heard an astute YouTuber break it down… but it’s about that time to ask:

With the tried and tested, perhaps even tolerable application of “ye olde RNG loot box” to three of their other titles now, is 8.0 the expansion where WoW messes with the monetization of WoW as a strict subscription game?

Disclaimer: My personal opinion is that I hope they don’t rock the boat too hard here. While hardline subscriptions are not the norm for MMOs any more, WoW is so far ahead of their closest in-genre competition that they get to write the rules at the top of the hill. That said, if the number crunchers can find a way to have boxes augment the game’s income, they are a business, not a charity.

I have learned over the years to never say never when it comes to Blizzard and what they will or won’t do. That being said, I find this idea extremely unlikely because Blizzard has found a much better monetization model with the WoW Token.

Think about it. The Token is basically a license to sell you fifteen dollars worth of product for twenty. The Token costs the purchaser $20.oo US, and the month of game time it’s worth is $15.00 US, which is also the value of the Blizzard balance it can be converted into. The gold you get for the token is essentially meaningless. You are really buying someone else $15 worth of Blizzard stuff, whatever they use it for, and it cost you $20 to do it.

Assuming that Blizzard runs its various goods and service on a for profit basis (that is to say, that a faction transfer or an in-game pet cost you as a consumer more than they cost Blizzard to create) then using Tokens to buy them means that they cost you nothing but gold (and thus time playing WoW) but they cost the person buying the Tokens to sell for gold an extra five dollars of pure profit for Blizzard. Sure, they had to pay someone to program the AH and automate the process of getting/selling the Tokens, but that work has been done.

And with Blizzard expanding their services so that you can gift people via Battle.net I feel like something like lootboxes simply isn’t necessary in WoW. Could they add it? Sure. But I don’t expect them to.

Q4TQ: Do you think there is any chance blizzard will announce a new game at blizzcon? All the hype appears to be around a new wow expansion rather than any hope of something totally new.

Remember, Overwatch is a descendant of the canceled Titan project, which we knew about for years. And even then, even though it was a huge surprise when Blizzard announced it at BlizzCon, people noticed shenanigans in terms of what was on the schedule for the convention and what was going to be on the demo machines, etc. It didn’t utterly blindside us, although very few of us expected a brand new franchise from Blizzard.

Would I be excited about a new game? Yes, depending on what it was. I’d love to get to see a new game from Blizzard, don’t get me wrong. But at this point in my gaming life I’m simply not down for another MMO or anything always on — I want a game I can play when my cable is out. So if Blizzard announced a game like that? I’d be through the moon excited.

It’s not a Blizzard game, but have you tried Battle Chasers: Nightwar yet? It definitely hits the Chrono series itch, I feel. Or Xenogears which was my absolute favorite JRPG. And the art is phenomenal, which is to be expected. It’s a bit shorter than the Chrono games or Xenogears but really, those games took over my life back in the day and I’m not surprised a modern game would be a more reasonable length. If you’re into turn based RPG fun, I don’t think you’ll get a better one this year.

Say, that’s something new you could try, Blizz. An actual RPG.

QftQ: How would you like it if, instead of hero class, Blizzard announced Hero Races. That is, for the next expansion a select set of races we’ve assisted is available (some alliance or horde, some shared) and you start at the level boost character level?

Each race could have a small movie intro with something along the lines of: “You remember when the Alliance and Horde came to your lands, and once the Legion came Azeroth, realized you had to join in the fight, not just for your people, but for the world”

Basically, a reason for any race we’ve previously had to earn rep with (that isn’t a major race) could be folded in. Jin’yu, Hozen, Tol’vir, Dryad, etc.

I think with the existence of Character Boost this is unnecessary and it eliminates one of the most fun aspects of playing a new race, leveling up as one. I’m not terribly worked up about it, but I think I agree with Domehammer that it would need to be optional in some way.

The best compromise in my mind would be that every account should have a free Character Boost attached to the first member of one of these races you rolled baked in at the end of its introductory zone experience. So if you rolled a Vrykul, you’d play through the Stormheim starting zone (or Howling Fjord or wherever it was) and then at the end of the zone you’d get the option to level boost, using up the special Character Boost attached to your Hero Race. That way, you could start at level 110 at the next expansion, but you wouldn’t have to if that wasn’t what you wanted to do.

And also Hero Race sounds weird to me. They’d definitely need to work on that name.

I have been hidden and buried under work and lurked for months but fear not for tjc569 has returned with an assortment of foolish questions to ask!

Todays question, of all the millions of skins in Heroes of the Storm what amazes you that the Art Gods of Blizzard have not made a skin yet?

My #1, infested Raynor, seems so obvious as a “what-if” skin, I mean Raynor might have let himself be infested for Kerrigan.

#2: WoD Thrall, I mean they have been doing “updated” skins from bases for a while so why not Thrall rocking the shaved head look?

Ever since they gave Sonya a Superhero based skin I’ve been amazed we haven’t seen more of those. We got Raynor as Captain America (complete with wings on his head) but why not Cassia as Wonder Woman or Reghar or Rexxar as Batman? Some Protoss or another as Velen would also be cool. Or Velen himself. Why don’t we have Velen yet?

Okay, that’s the Queue for today. I haven’t done this in a while, but if you haven’t bought one of my books, they’re three bucks for a digital copy and lord knows after the month I’ve had I could use the help. Otherwise, I hope y’all have a good weekend and a great BlizzCon week.