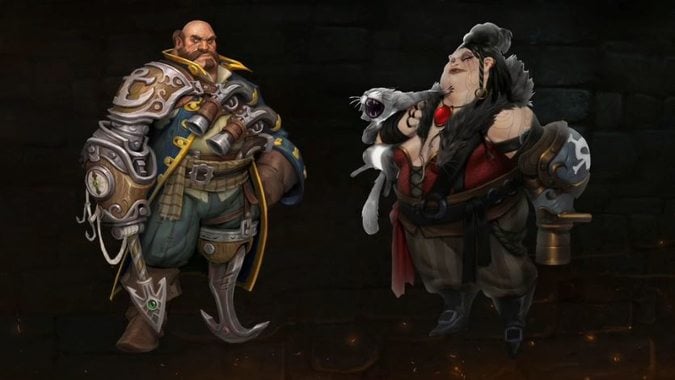 Today’s Art of Warcraft panel mainly focused on the amazing new art and design we’re going to see in Battle for Azeroth. But it also held some surprises in a Q&A after the panel. Upright Orcs are on the way, as well as updated Druid forms to reflect the Allied Races. Goblin and Worgen models are still being worked on – not for release with 8.0, but it will be happening eventually. In addition, those quivers for Hunters that were mentioned way back when the original model updates were ongoing? That’s a conversation that is still happening, now that the days of Artifact weapons are coming to a close.

However, that’s all Q&A. Let’s talk about the panel – which included brief overviews of things we’ll be seeing in Battle for Azeroth. 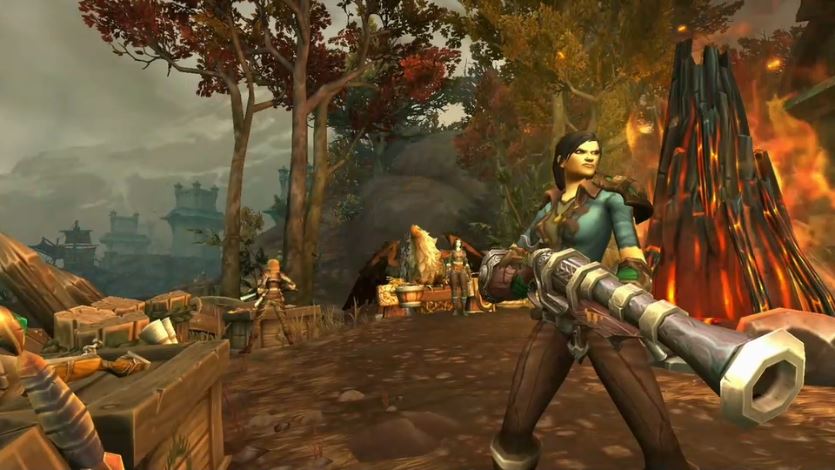 Senior Character Artist Christopher Chang gave a brief overview of the different cultures we’ll be seeing in the next expansion. Kul Tiras and its residents are practical, tough, and battle hardened from years spent fighting enormous sea creatures and other enemies. That might sound a little bit like Gilneas, but there’s a distinct difference in the design approach. Nautical motifs feature heavily in Kul Tiran design, whether it’s armor, weapons, scenery, or architecture. Even the character models are different, reflecting the culture of Kul Tiran lifestyle.

The same applies to the Zandalar. We’ve encountered them before, but they wanted to deliver a fresh approach. What we’ve seen has been just a small piece of what is a vast civilization steeped in ritual. Zuldazar and the Zandalar pull heavy references from Aztec and Mayan culture – it’s reflected in the environment, as well as the Zandalar themselves. Armor and weapons are littered with gold and ornate carvings. And of course we can’t forget the dinosaurs – that giant one from the trailer? It dwarfs a Devilsaur. 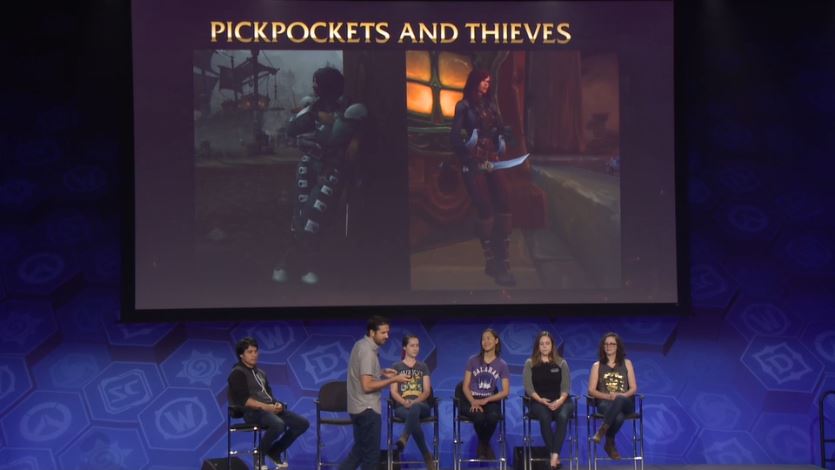 Senior Animator Ian Lang spoke about worldbuilding, and how that strong cultural narrative drives the things they make. They want to create a cohesive experience. Each NPC has a reason for being where it happens to be. A naval port like Freehold is going to have merchants, which means that merchandise is going to attract rogues and riffraff. Guards are needed to keep things safe, and town criers are needed to make sure everyone knows the rules. New idle poses and animation has been added for a lot of these NPCs as well.

In the realm of spells and other important shiny stuff, FX Artist Sarah Carmody discussed some of the spell changes we’ve already seen in Legion so far. This is, in fact, an ongoing process – they aren’t done, and they’re planning on hitting spells from every spec in the game. The idea behind the changes is to do a better job of visually communicating what a spell does. Is it damage, is it healing? Simple changes, like softening the shapes in spells can help make that distinction more clear. 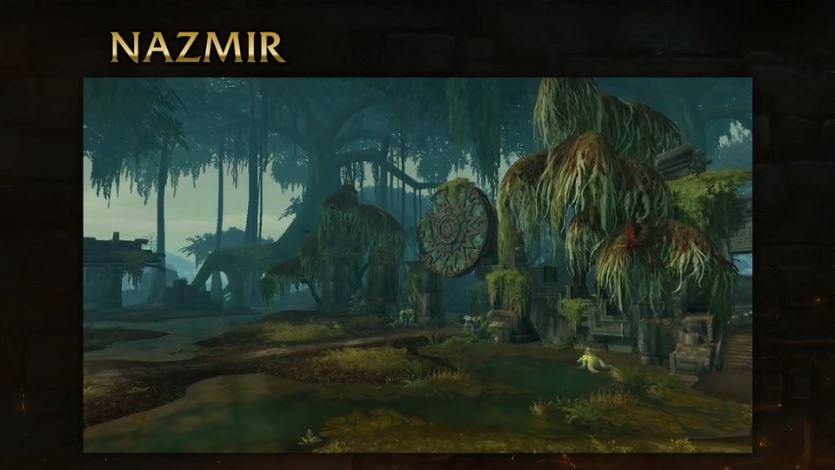 Senior Environment Artist Tina Wang talked about some of the news zones we’ll be seeing, and the thought that went into the environmental design process. Zones like Nazmir in Zandalar were designed with inspiration taken from salt marshes and swamps. New water has been designed for this expansion, allowing the environmental team to create murky water with muck at the edges. While they do take their influence from the real world, they try to make each piece of scenery feel unique. In Nazmir, we’ll be seeing ancient, massive trees with upended root systems that players can run through. They do try to design with both dark and light spaces in mind, however – they don’t want players stuck in dark and gloomy places all the time.

Dungeon Artist Jessica Clarke spoke about the thought behind architecture and structure design in Battle for Azeroth. The Dungeon team doesn’t just design Dungeons – they also design buildings around the world as well. For Kul Tiras, building design was inspired by study of ships and ship structure. The shape of windows and balconies reflects the idea that this is a seafaring culture, with nautical design motifs sprinkled throughout for hits of additional flavor. Architecture design also helps define the culture – a building of thieves isn’t going to look very fancy, whereas the more upper class citizens are going to have more ornate structures. 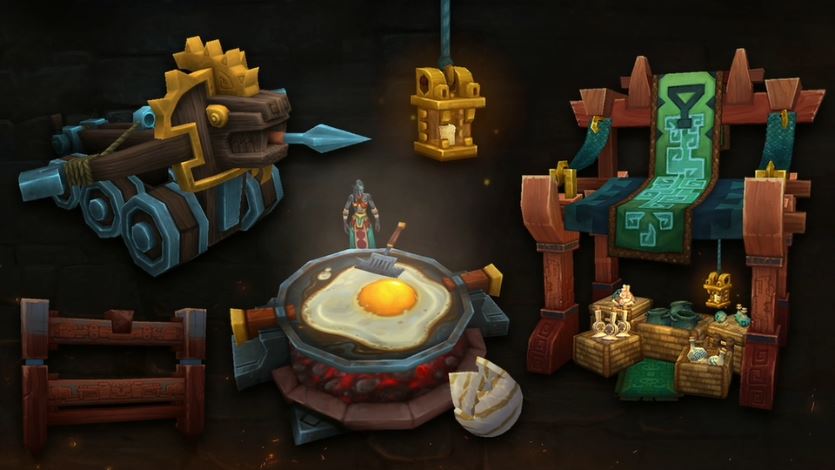 Prop Artist Ashleigh Warner went over props – all the little pieces that make spaces feel lived in. For the Zandalari, they went back and looked at what they’d done before, and how to make that feel new again. They dove into that Mayan and Aztec influence, and brought in that dinosaur motif as well. The Zandalari are an ancient culture, spiritual and intellectual, but they’re also Trolls – and still wild.

Warner also spoke briefly about creating material for holiday events. The prop team loves working on holidays, because it allows them to be a little sillier than normal – but it also presents challenges. With the Auction House Dance Party, they had to figure out how to make something as complex as a DJ turntable fit into WoW without looking too advanced. Check out the gallery for an extended look at the new art and designs we’ll be seeing in Battle for Azeroth – there’s some extraordinary stuff in there. 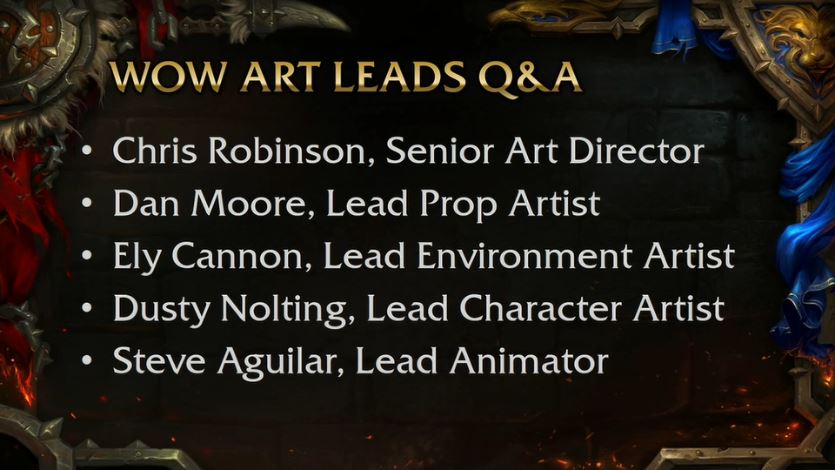