The Queue: A very good kitty 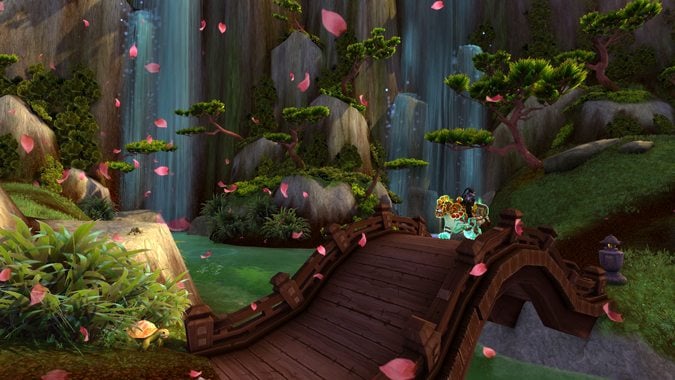 Not only did I finally get a Monk to 110 over the weekend, I managed to complete the Monk class mount quests while I was at it. I’m pretty sure this has been my favorite class mount chain so far — I really enjoyed returning to Pandaria for a little while. And Ban-Lu is basically the best mount I could ask for. He says hello every time I summon him! He doesn’t have wings, he just…floats!

He’s an excellent kitty. I like him a lot. But let’s get to your questions!

QfAnne: Would Classic WoW be tempting for some of the role-playing community to come across to?

It’s possible! At the same time, character and class choices were way more limited in vanilla. Both Blood Elves and Draenei are currently wildly popular races for roleplay. Neither one existed until Burning Crusade. In addition, Paladins were Alliance-only, and Shaman were Horde-only — and only Night Elves and Tauren could be Druids at that point.

So it kind of comes down to a choice of what you want to play, or what type of roleplay storylines you’d like to be playing. Classic’s storylines weren’t the most cohesive in the world. They weren’t really tied together or related in any way — each content patch was just one of a series of unrelated story elements thrown out there. Burning Crusade began to tie those stories together, but Wrath was where we really started seeing cohesive tales being told.

How does that reflect on roleplay? Well for one thing, it gives classic roleplayers all the freedom in the world to just make up their own plots without worrying about major thematic elements and how they might affect a guild or group storyline. That kind of freedom is nice to have, creatively speaking. But it also means that people might not be able to play the races they really want to play. And if someone is really keen on Draenei or Blood Elf stories, they aren’t going to want to go back to the time where neither existed.

Having leveled an assassin rogue, outlaw rogue, feral druid, and havoc demon hunter to 110, I have to ask: What is the appeal of the assassin rogue?

I can’t find anything this rogue does that the others don’t do better. If one wants to stay rogue, the outlaw has better range when needed, and the hook to pull one’s self up or safe from falling damage. Not to mention more tmog options. The subtlety rogue doesn’t even take fall damage, which is fun. A feral druid has the same DoT upkeep as assassin, same stealth, same build/spend of combo points, but has other tools, varied role choice in offspecs, and insta-flight. And the DH plays faster, again more tools, and while it looses stealth, double jump and glide make up for it.

It seems like this is a spec that needs some flavor added to make it more appealing, something that defines an assassin as opposed to any of the other specs I mentioned.

As someone that’s been playing Assassination since Wrath…well, I’m going to be perfectly honest with you. I don’t have an answer for your question. Assassination doesn’t get loads of special bells and whistles, or major “flavor” options like other classes. But there’s something intrinsically appealing about that, in its own way. You get in, you murder things, you get out.

There are days where I wistfully sigh and wonder if perhaps it would be nice if it were a little more interesting. But at the same time…well, it does the job, it does it nicely, there’s nothing particularly complicated about it, and that works for me. These days, it’s not really difficult to pick up and “master” an Assassination Rogue — but that isn’t necessarily a bad thing. Sometimes you want a simple option, you know?

So I guess my own personal answer to your question is I don’t know why it’s appealing necessarily, it just is. I like playing Rogues. I’ve been playing Assassination long enough that it’s just…familiar at this point. Playing it is like putting on an old coat — sure, maybe the fabric’s faded a little, maybe it’s not quite in fashion anymore, but it’s one of the coziest things in my closet, and I like that.

Q4tQ: Any chance we will get timewalking versions of the vanilla dungeons that were replaced as the game went on? Classic Deadmines, Ragefire, Scarlet halls, Scholomance, Stratholme, etc.

I’d be all for that — especially if the old loot tables were put in place for the Timewalking versions. I’d love to be able to get my hands on some of that old gear again, you know? It’d also be nice to have a way to get those old blue dungeon sets as an alternative to the Darkmoon Faire method. Don’t get me wrong, I’m fine with the ticket-collecting, it’d just be cool to have another way to get them if you wanted — and more Timewalking content is always a good thing.

Q4tQ: with Alleria being the lore behind the Void Elves, why in the world would the Lightforged Draenei give them the time of day, much less ally with them in the Alliance?

Considering Turalyon’s been fighting alongside the Lightforged for a thousand years, I suspect their decision has much more to do with him than anything else. But beyond that — Turalyon knows Alleria, and trusts her. Between the two of them, I think they’re more than capable of having a reasonable conversation with the Lightforged Draenei.

Keep in mind that we’re also in the dark as to how either of these races comes to join the Alliance just yet. There could be some major new story reason behind it that we simply haven’t seen yet as well. But it’s still not out of the realm of possibility, even without a major new story reason.

Q4tQ Why didn’t the Alliance searched for kul tiras?

Well, given the general state of the world and the sheer amount of chaos we’ve gone through since the beginning of World of Warcraft, it’s probably just a matter of “you know, maybe that’s not super important right now.” I mean, there were way bigger issues to deal with.

The only person that might have been interested in hunting it down is Jaina — and given her role in her father’s demise, I doubt she was real keen to run home and tell mother about it. Part of the reason she stood aside and let Daelin die was because he was stuck in the past — I don’t think she particularly wanted to go pay the past a visit after that. I don’t know that Kul Tiras would’ve been happy to see her, for that matter.

Here’s a couple questions for all you transmog pros: for PvP sets:
1) if I get, say, the Horde set, does that also unlock the corresponding Alliance set?
2) if I get the Combatant’s version, which shares appearances across an armor type but still apparently flags by class, does it unlock that appearance for all of that armor type? (EG, I get the monk’s Combatant version, can I use that appearance on a Druid?)

I believe if you unlock the Alliance version, you get the Horde version — it’s locked by class, not by faction. However, this means if you unlock a Combatant’s version for say, a Druid, you’re not going to unlock it for a Rogue. Again, it’s restricted by class. I went ahead and double checked this, because my Rogue’s got pretty much every leather PVP set available aside from the current tier. My freshly 110 Monk has none of the leather PVP sets. Similarly, my Shaman has a couple pieces from the mail PVP sets, but they didn’t carry over to either of my Hunters.