The Queue: My birthday is in one week 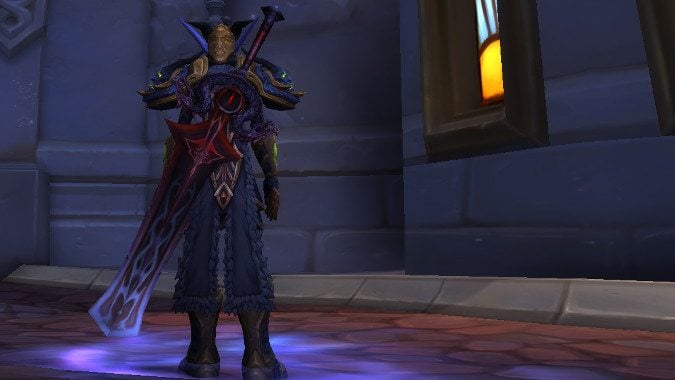 You have a week to prepare.

Q4tQ: With the upcoming introduction of Void Elves and their inherit connection to the void and the fact that allied races are kind of an easy way to have a “new” race without actually having to create a ton of new assets; does it seem likely at all that we might get “allied classes” at some point? Void elves as priests who heal using shadow, or similar? Might be a way to get some new specs that give a unique class/race fantasy. Blood Elf Spellbreakers for another example.

I have no idea how likely that is. I don’t feel like it’s terribly likely, because either it would be purely cosmetic (Void Elves who rolled a Holy Priest would get variant spell effects that used Shadow/Void magics) or it would be a lot of work to design a whole new class for certain races.

I’ll be honest, I don’t even know what a Blood Elf Spellbreaker would be. Like, how would you define them in WoW at this point? You could do pretty much everything you need to be a Spellbreaker with a Warrior, honestly. Shield, fancy glaive, Spell Reflection — you’re done. Doesn’t really require a new class.

Q4tQ: How do you think void elves are going to be able to use the light as holy and discipline priests?

How are Lightforged Draenei going to use the Void as Shadow Priests?

The easy answer is “because the game lets you switch specs” and there won’t be much more than that needed. What we’ve just seen in Legion is that both Light and Shadow are part of the Priest arsenal — even Velen made use of both in the Netherlight Crucible. A Void Elf using the Light or a Lightforged Draenei using Shadow would be part of that tradition.

Clearly, each prefers the power they’ve chosen to master, but just as clearly they’ll learn the other through Priest training. One could argue that Discipline is more than just a spec, it’s the key quality that distinguishes Priests from non-Priests, specifically the discipline needed to learn to control and harness Light and Shadow, since Disc priests use both.

Q4tQ: Do you think Sylvanas will be able to handle the Forsaken (so called) unrest while keeping her position as Warchief? Would you rather have her letting Nathanos lead the Forsaken while she leads the horde or should her leave the Warchief post for someone else?

Sylvanas can handle whatever the story requires her to handle. Her history would seem to indicate she’ll find a way to make use of said unrest.

The Forsaken are ultimately not as monolithic as we’d seen them previously — their cult of personality around Sylvanas seems to be fraying to some extent, for various reasons. For starters, it’s been a while since Sylvanas espoused the “What are we if not slaves to this torment?” attitude she was once notorious for. Since the end of Wrath she’s been pretty gung-ho on the idea of killing as many people and raising them as Forsaken as possible, as we saw on Fenris Isle when she sends Horde agents to do exactly that — it’s not enough for her to simply rule over the Forsaken that exist, nor even to simply raise the already dead. And some Forsaken like the Desolate Council aren’t entirely down with this idea.

Some of them don’t want to endure forever, or make the Forsaken into a permanent nation. Some of them don’t want the immortality Sylvanas is chasing. Some Forsaken still see what they are as a curse, a torment, and the idea of spreading that condition to more is repellent to them. Sylvanas’ experience of what happens after death came when she threw herself off of Icecrown, but not all Forsaken view it the same way because relatively few of them — one, in fact — has had that experience. While she is still beloved by the majority of her people, having left Undercity to rule in Orgrimmar means that she’s no longer there on a day to day basis and others have stepped up to lead, and that weakens the cult of Sylvanas.

Now, I have no idea how this is going to play out. Sylvanas is a wildly popular character and I don’t see her going the way of Varian or Vol’jin — she feels more character death immune than Thrall, even. I’d be less surprised if Jaina or Anduin died than Sylvanas meeting her true death. So I assume she’ll handle it as well as she possibly can. As far as what I’d prefer?

I’d prefer she died. I do not expect it to happen, I suspect there are a lot more stories they want to do with Sylvanas. But I’d personally prefer she died. It’s time she pay for what she’s done in Gilneas, in Southshore, throughout Alterac and Arathi. Remember, it was Sylvanas who ordered the creation of the plague used to kill Alliance and Horde at the Wrathgate. It’s time for Sylvanas to die for good. She’s too much of a threat to every living thing on Azeroth. I would rather she neither be Warchief nor return to control of the Forsaken, I would rather she was destroyed.

And yes, I’m aware of all she suffered when Arthas invaded Quel’Thalas. I think one could make the case that her tenacity in clinging to existence this long has done her a disservice. That she endured and existed beyond the point where everything that was admirable about her — her skill, her strength of will, her adaptibility and even her concern for others — has curdled and become part of something monstrous.

Although I do still think the most fitting punishment, in terms of what she would hate the most, would be to return her to life. That would be a fascinating way to end this expansion. Anduin zaps her with the biggest, most powerful resurrection spell ever cast and returns her to life and now the Forsaken have to deal without her and she has to deal with everything she’s done.

Q4tQ: for Matthew Rossi specificly: What do you think of the current season system in Diablo 3, would you like to see some changes? if so what do they involve? For me I would love to see bounties give a reward for each bounty you finish instead of every 5 (hopefully that made sense). My pc has a tendency to disconnect when I am going back to one of the hubs, so I have dc’d at least 10 times this season alone to finish the bounties for a specific act.

I don’t have that DC problem.

What I would like for Seasons is threefold. One, I’d like it if Haedrig’s Gift offered a choice from several sets instead of rotating through just one. I know it rotates, but I still find it terrifyingly annoying that it takes so long to get back to the sets I’m interested in.

Second, I’d like it if every season had new gear introduced — new weapons, new sets, something. I have pretty much every legendary a Barbarian can get and I’m just waiting for the Ancient versions to drop. I’d love it if a new weapon was introduced, something I haven’t already used several times.

Thirdly, I’d love it if there was a way introduced in a Season to bump up a set piece to Ancient quality. It could be ludicrously expensive, but it’s annoying to me when I’m wearing my Wrath of the Waste set and I have to look at the shoulders and be annoyed that I haven’t gotten an Ancient version yet.

Q4TQ: Up until now, faction mounts have been factionwide for your characters. Presuming there’s no change in this policy, which non-Allied Race do you plan on riding one of the new faction mounts? Will your gnome ride a void chocobo? Will your goblin ride a moose?

I want to see a Highmountain Tauren riding a manasaber. That’ll be funny.

Aside from that, I have no idea. My current main is a Night Elf, and frankly I don’t see Void Elf, Lightforged Draenei or Dark Iron Dwarves having anything to offer her.

Do you use the same transmog across all specs, or different ones for each spec?

My Death Knight almost never comes out of Blood, so I use the same transmog for my rare forays into Unholy. Frost, I have a special transmog for her.

My Warriors tend to have theme transmogs for them, but I always tend to go with a different Protection mog than for Arms/Fury. But honestly, this expansion I’ve sort of stopped switching armor since I discovered this look.

I use it on my Night Elf, my Tauren, and my Human. I just really like it. It’s not a set — it’s just World Quest stuff. But I’ve fallen in love with it and I like it better than any of the sets that have come out this expansion.

We’ll see how I feel about sets in Battle for Azeroth but I expect I might wear this look for a very long time.

Okay. I’m writing this Outro while listening to a song named Outro, by M83 if you want to look it up. I have no idea why I told you that. I’ll see y’all next week.

Blizzard Watch is made possible by people like you.
Please consider supporting our Patreon!
Filed Under: Ashkandi
Advertisement