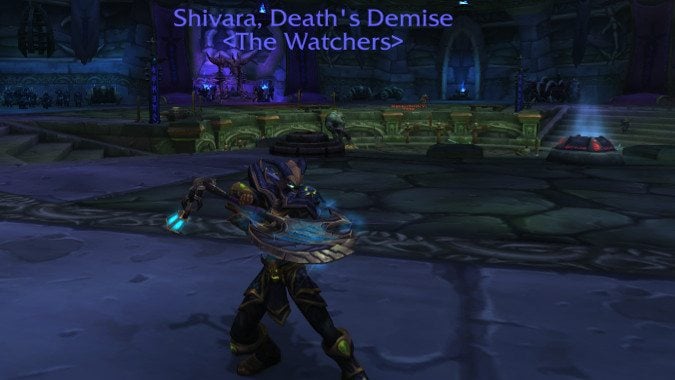 Blood DK’s are still a ton of fun, y’all.

Let’s do the Queue.

Q4tQ: Do you think mythic world first races have gotten out of hand? I just read an article about a benched healer for Limit DDOSing his own teammates to get an active spot in the raid. Between that and the mess earlier in Legion with one team locking another out of the raid, it seems like it’s gotten a little too cutthroat. Any ideas for what could be done to take it down a notch?

Well, obviously you shouldn’t DDoS your own guildmates, or ex-guildmates because if you do that they’re going to kick you out. But this isn’t anything new to the bleeding edge raid scene. Before Mythic even existed as a concept players were cheating in raids and being horrible to each other. I remember pushing debuffs off of the table in C’thun’s stomach, for example. That boss was tuned so hard that the best raid guild in the world had to cheese it to win, and that’s back in Vanilla when guilds would routinely try and find a way to make life hard for each other on world bosses.

So I think this isn’t really Mythic raiding’s problem. It’s the specific players who are doing jerk things and all that can really be done is either their guilds or, eventually, Blizzard will punish them in some way. I’m not sure what else you could do because all of this ultimately comes from the competitive nature of people playing an online game. The best you can hope for is to police the most egregious offenders and so far I haven’t heard of anything in Antorus that wasn’t an internal matter dealt with by the guild in question in terms of the Mythic race.

Q4tQ Based off of what we know about who we will face in BfA and how the past few expansions have structured their stories, do you think that we will build to a direct confrontation with the Old Gods during BfA or is BfA setting the stage for the return of the Black Empire in a future expansion?

Between Kul Tiras and Zandalar we’re seeing some Old God influences creeping in. Kul Tiras has the Sea Priests with their tentacle staves and the Freehold pirates who use a lot of tentacle motifs. We know N’Zoth has some connection to the sea — it’s been hinted at since Cataclysm and we’ve seen concept art for Azshara in Battle for Azeroth so we know the Naga might be involved too. But what’s more telling is Zandalar, where one zone is a wasteland left over from when the Aqir attacked Zandalar and there’s a Titan facility in the Nazmir zone that was apparently involve in experiments as the Titan-forged studied the Old Gods to try and figure out a way to kill them. All of this suggests that there will be, at the very least, a few surprising reveals in the expansion related to the Old Gods.

My money is on a reveal that Hakkar is somehow related to this ‘Blood God’ who is attacking the Zandalari from the Nazmiri facility and that his origin has something to do with the Titans trying to find a ‘cure’ for Azeroth from the Old God infection. And I think whatever that storyline is, it’ll be tried into the whole ‘trying to heal Azeroth’ theme of the expansion, so it’ll probably be about the same tier as Tomb of Sargeras was in Legion — a big deal, certainly, but not the final raid tier. Whether that will lead into a full on assault on N’Zoth at the end of BfA or if we’ll do something else, I’m not at all comfortable saying yet.

Remember, we were told by Xal’atath that N’Zoth is waking up and we should hurry up and deal with Sargeras because there were bigger battles to fight. Does that mean N’Zoth is the end boss of BfA? Or just that the Old Gods are a more immediate threat? Is the final raid of the expansion us healing Azeroth by battling for it against N’Zoth? Or is it fighting the opposite faction for control of the planet?

Which allied race, if any, are you super stoked to play in BfA? Have you already decided whether you’ll level from scratch or race change an alt?

Honestly, I’m not really super stoked for any of them, as a player.

As an Alliance player, I get Void Elves (which I don’t care about) and Lightforged Draenei (which are cosmetically different but not enough so to make me want to roll one instead of playing the six Draenei I already have) and eventually Dark Iron Dwarves, which I’m at least interested in seeing the lore on.

If I play Horde side, I’ll likely play Highmountain Tauren because I like Tauren. But Nightborne are just Blood Elves with Night Elf looks and I find them going Horde makes them utterly uninteresting to me, and I don’t much care about the Zandalar as a playable race because I don’t much care about playing a Troll in WoW. I’ve wanted Forest Trolls for years, but the Zandalari don’t do it for me.

I’m a lore junkie so I’ll probably unlock them all just for the story, but I find the choices made on which faction gets who this time around pretty uninspiring. I think if the Alliance had gotten the Highmountain and the Horde had gotten Dark Irons I’d be more interested, but as it stands both factions now get two groups of Elves and in each case I prefer the Elves they already have, and then each faction gets a race that’s basically one they already have but with some appearance changes — twice.

Not trying to be a downer on this. If people are excited for Allied Races, that’s great, I hope you enjoy playing them. But for myself I’m really not feeling the whole thing so far. I’m hoping future content brings us more inspiring choices.

Lore Q4tQ: Was Sargeras tormenting the titan spirits for eternity by the time we go there and they were just finally breaking? Or did he just get them and was turning them? The timing just seems really convenient for us to show up and Aggramar is awoken as a dark titan and all the rest are about to be turned but we stop the Coven. Is there any lore surrounding this or is it just a mcguffin to get us to the Argus fight?

The real reason Sargeras and the Coven hadn’t broken the Titans yet was that they didn’t have Eonar yet, and as long as Eonar held out the others had some hope. Hope is a powerful thing when you’re the cosmic godlike spirit of an entire world being tortured for what is, for you, not all that much time. Us arriving in the nick of time is convenient for us, sure, but it’s not all that big a deal when dealing with beings who exist for eons and eons. Aggramar breaking is likely more the result of his long friendship with Sargeras — he wanted to believe what Sargeras was saying because then his friend didn’t really betray him. And likewise, Sargeras needed Aggramar on his side to validate everything he’s done.

I don’t think it’s a McGuffin so much as we were at the final stage of Sargeras’ plan for Azeroth and the universe, and that included the capture of Eonar and the breaking of the Pantheon.

QftQ: What title does your main character – or any other – use, and why? Also, do you swap titles on a regular basis or do you keep one title per character?

I tend to vary it up between a handful of titles, but my favorite is Death’s Demise. It’s a title players can’t get anymore since it’s a Realm First title from doing Yogg-Saron with zero keepers up, which I got back in Wrath. My guild back then was pretty far along on the Realm First game, as I also got The Celestial Defender and Grand Crusader at the same time. And while I like both of those titles a lot and use them fairly often, Death’s Demise is my unquestioned favorite.

There are other titles I like, such as Savior of Azeroth, or Dragonslayer, or Blackwing’s Bane, but for me Death’s Demise is a perfect memory of a moment where my guild came together and kicked ass at something really hard. Since my right eye started to fail right around that time, it’s something I know I’ll likely never be able to exceed in WoW.

Blizzard Watch is made possible by people like you.
Please consider supporting our Patreon!
Filed Under: Battle For Azeroth, Old Gods, Rampant Speculation, Titles
Advertisement