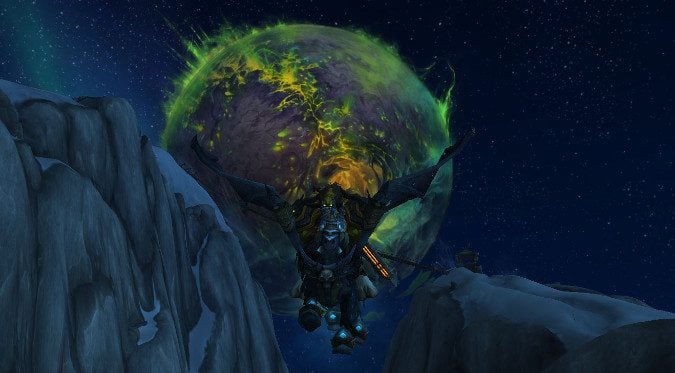 I kind of hope Argus doesn’t go away but I’m pretty sure it will after Legion ends, and that makes me sad. It’s pretty awesome looking.

This is the Queue, where we talk about Blizzard and their games. Let us begin.

Some of us suspect Odyn caused undeath.

Q4TQ: Speaking of legless models, is Kin’garoth supposed to not have any legs? It looks like his body breaks off at the base of the torso, but I can’t tell if it’s deliberate or if it’s imperfect design implementation.

According to his journal entry, Kin’garoth is physically infused into the equipment in Antorus so he can more rapidly create new war machines for the Legion. The concept art for Kin’garoth certainly seems to imply that he wasn’t meant to have legs.

Basically, Kin’garoth is an Antaen who allowed himself to be chopped up and stuck inside Antorus in order to make those Garothi reavers faster. He’s more machine than demon.

Q4tQ: what lore reason would you come up with to explain why gnome druids should be a thing?

Some Gnomes befriend Freya and use their technological genius to save a nature preserve she’d created up in Northrend by rebuilding the Pylons the Cult of the Damned destroyed in Sholozar. She blesses them with a direct connection to the Emerald Dream, using her own connection to it and their Titan Forged nature. Now Gnomes can channel the power of the Emerald Dream even more directly than others who learned from Loa or the Ancients, since Freya created the Emerald Dream as we currently understand it.

I think Blizzard messed up giving the Nightborne, a whole culture, to the Horde. This had the effect of having to balance the elf ratio on the Alliance side somehow – hence the Void Elves. Velves for me are at most a specific order of fighters that learn what Alleria has to offer. They don’t have a culture or a city, they just have the Void tactics in common.

Same goes for the Lightforged, they are an itinerant army. Sure they’re all Draenei but they’re not going back to recolonize Argus anytime soon.

Only the Dark Iron are a true subculture instead of an army or order.

On the flipside, the Horde gets three well established subcivilisations complete with their own territories and societies which are more than military units.

There are pros and cons to each race. Having your own base of operations and territory is a bonus in many ways, but it also means that area has to be defended — the destruction of Teldrassil and the Undercity shows that’s not a given anymore. Suramar could just as easily be destroyed.

Imagine if a Night Elf force — perhaps a few survivors of the Moon Guard slaughtered by the Nightborne during their alliance with the Burning Legion — found and destroyed the Arcanador. There are Night Elves living in nearby Val’Sharah and some actually settled in the wilds outside Suramar City, and with the destruction of Teldrassil Val’Sharah could well end up a haven for Night Elf Druids who no longer have access to their homeland.

I’m not saying that will happen. I’m just pointing out that there are ups and downs to having established societies join one of the factions. The Highmountain are used to being utterly self sufficient and now they’ll be asked to make sacrifices and contribute to the Horde, and as we’ve seen in real world history, that can lead to conflict. The Highmountain might well decide the Horde would be better off with them in charge of it.

In some ways, it’s much easier to integrate groups like the Void Elves or Lightforged Draenei because they don’t come in with their own city, their own nation and the ability to demand more from you. Anduin is a lot less likely to face resistance and demands from his new allies than Sylvanas is. Lightforged are likely to turn to either Turalyon or Velen for leadership, and both are by now established Alliance stalwarts. The Nightborne respect Liadrin, but they have Thalyssra as their leader, and she turned on one superior already when she felt said superior was making the wrong decision. Could Sylvanas ever truly trust her?

I think the new Horde races have interesting story potential because they have their own ideas about what they want from the relationship, and are in a better position to enforce those ideas.

Q4tQ: According to Velen and the Dungeon Journal, the Antoran High Command brought about peace to Argus. My question is, against who? Who were the Eredar fighting before Sargeras arrived?

Well well, two from the man who used to be Chrth today. That’s rare.

Short answer — Each other.

Longer answer – We know of at least one case of an Eredar who ended up dead because he threatened the peace of Argus, and if you’re a Warlock you can carry his head around as your Artifact. The Eredar culture went back many, many thousands of years before the arrival of Sargeras. Argus was a world of it’s own, nearly the size of Azeroth, and it’s not surprising that there were once multiple cultures on its surface.

We also don’t really know yet a lot about Eredar culture before Sargeras. For all we know there were many races on the surface of Argus once. But it’s clear from the way that Archimonde ended up in the Triumvirate that there were Eredar who were not as peaceful and orderly as the others wanted, and they were dealt with. Sometimes quite harshly.

QFTQ: What’s the likelihood Blizzard will ever relax the requirements for the BfA races so that bottom-of-the-barrel players like me can actually play one?

I expect that once we’re further away from Legion they might relax them, because players won’t want to have to go back and do Legion content just to roll one. So maybe during Battle, with an increasing likelihood once we get into whatever follows that.

Okay, that’s the Queue for this Friday. I’ve got a new book out — it’s short stories, so it’s easy to pick up and put down when you want, and it’s fairly short. Maybe give it a shot, if you haven’t tried my stuff already. If you’re being buried by snow in the States, try and stay safe.