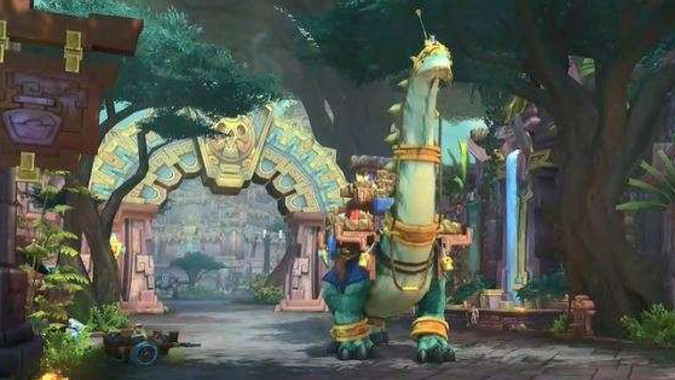 It will likely not be called Brontosaurus in game. It will almost certainly not be called  Apatosaurus, either. Three years after that debate reignited, Blizzard will finally put a sauropod model in the game and I’m over the moon. If players get this as a mount I will probably explode from sheer glee.

It’s the Queue. Are you a dinosaur? If not, why not? If you were a dinosaur which one would you be? I’d be a Giganotosaurus or an Acrocanthosaurus, I think. Big therapods. Gotta love big therapods, am I right? I’m right.

Q4tQ: I really enjoyed a lot of the “hidden effects” of artifact weapons. Felt like some cool easter eggs for many of the weapons and I’d love to see Blizzard carry that forward with the various classes. Like maybe a DH using spectral sight in Black Temple could see a cool scene or something. Would you like to see more cool hidden effects like this and what kind would you like to see?

I absolutely love taking Strom’kar to Throne of Thunder or Zul’Aman and watching Trolls run away in terror. It’s so fun. I’m just tickled at the idea that the weapon has killed so many Trolls that they can sense it and I’m going to be intensely sad when I can’t take it to Zandalar Isle and scare the jimpinies out of the Zandalar.

I’d love it if Druids could talk to critters in certain raids and get dialogue boxes — imagine if you were in Emerald Nightmare and a bird would be all “No, bad tree, awful tree, don’t go that way” while you were clearing to Il’gynoth? Or a raccoon or marmot could hit you up for some food? I think that would be neat. Maybe even extend it to non-hostile animals, with the understanding that not all animals have a lot to say. Your druid could try and talk to some moose up on Highmountain, but they just reply with “Need more food” and go back to eating.

Q4tQ: Khadgar doesn’t have Atiesh after the Argus fight on The Vindicaar. what happened to it? did Medivh get it back?

Obviously I don’t actually know the answer and it’s possible they just forgot to render it for some reason, but it seems also possible that Khadgar used Atiesh in much the same way as we’re going to be asked to use our Artifacts to help save Azeroth.

Heh, just remembered how badass it felt doing Demon Hunter and DK class campaigns the first time. Argus lore was fun and all, but I think raid cutscenes aside Legion peaked early in the story department.

Campaigns that I absolutely loved:

Campaigns that I felt were lacking:

Campaigns I didn’t do:

So I really can only speak to those four, but of those four, the DK was the absolute best, followed by the Paladin. The Hunter and Warrior ones felt weird and unsatisfying. Hunters start off strong but then it’s like they’re doing hit jobs for the Kirin Tor for no reason, and Warriors get a sky palace and get to be a pokemon for Odyn. I honestly loved a lot of the lore and story of this expansion, but the Warrior order hall campaign did not excite me. I loved the Artifact stories, but any class could have done the Warrior campaign and not felt out of place.

In comparison Argus felt a lot more coherent to me. Overall I prefer it to the Warrior campaign.

I wonder how they’re going to handle leveling through Legion content as an Allied Race. It’d seem kinda funny for a Highmountain or Nightborne to have to prove themselves to gain acceptance among their own people. I think if there were ever a place where they’d have race-specific quests, or at least quest variants, that would be it.

I bet they’ll change as little as possible. They’ll likely not want to have to do the extra work of having Thalyssra gasp and say You’ve returned when your Nightborne is canonically from after the events of Legion and Thalyssra joining up with the Horde anyway. Same with the Highmountain. They’ll just breeze over it and get on with things instead of making changes to have Mayla say Why am I telling you this, you’re a Highmountain, you know all this already.

Q4tQ: Hypothetical — but how would you feel about Genn intentionally infecting Anduin into a Worgen? His own son is dead, he’s mad with grief (and rage) about the Forsaken. Could that potentially blind him to do something nonconsentual with Anduin if he couches it to himself that he’s only “protecting” Anduin from becoming undead?

Genn knows the Worgen affliction is a curse. It wasn’t Genn who offered his blood to the people on Fenris Isle to protect them from the plague of undeath, it was Darius Crowley. As far as we know, Genn has made sure his own daughter isn’t afflicted, I doubt he’d infect Anduin who has taken on some of the role of a surrogate son to him (much as Genn has become a stand in for Varian) plus it would be a betrayal of Varian’s trust after the man gave his life for the Alliance.

I’m not opposed to Anduin becoming a Worgen — I think Anduin as a Worgen would be hilarious — but I definitely don’t think Genn would deliberately do that to him. Darius Crowley might, but Genn wouldn’t.

Okay, that’s the Queue for this week. Brontosaur mounts, guys.

Blizzard Watch is made possible by people like you.
Please consider supporting our Patreon!
Filed Under: Brontosaurus
Advertisement