The Queue: What is even happening here? 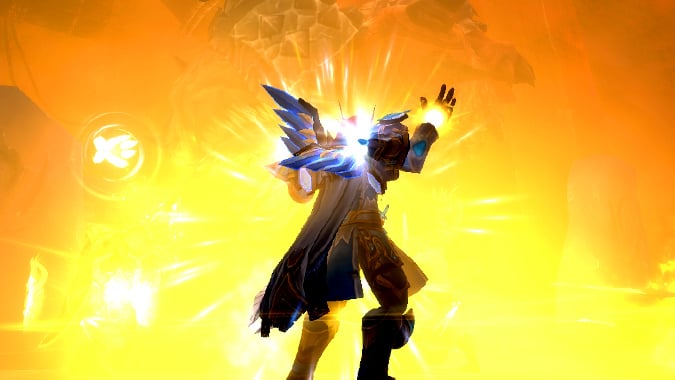 I have noticed a trend lately. A trend in which readers seem to be forming some kind of Mitch-worshiping cult. And this worries me, people. I am worried for you. Are you feeling okay? Do you need a hug? Is there a reason you are walking, arms open, into the dark inky void? Do I need to cleanse you with holy fire?

Just asking. Because we can make that happen if that would help.

You’d let me know if you needed something, wouldn’t you? I’m here for you. I just want you to be happy and safe. And if that requires the use of the Holy Light… well…

But for now, let’s check out your questions for the day.

I’m starting a baseball team. Who wants to join?

As long as I don’t have to know how to play baseball, I’m in. (So I guess we’re talking about playing RP baseball in Goldshire.)

I’m sure I can farm up some appropriate transmog.

I miss the days when not every class had an interrupt. With Blizz going back to giving classes unique rolls, what do you think the chances are they will go back to having kicks or silences as a unique and limited ability?

The idea of every class bringing something unique to the table a fantastic idea. It’s something Blizzard started doing in Legion with the class fantasy focus: every class felt unique and powerful. But even with this focus on class, classes can be pretty homogenized. If you play a lot of alts (and don’t we all?), chances are you notice this when you set up your button bars. When I play, my keybinds reflect this pattern: 9 is always my interrupt, 0 is always my movement skill, and both – and = are emergency “I have to click something or I will die” spells. 1 through 5 (that would be hotkeys I can easily hit with my left hand) are my most-used abilities, in vague order of casting priority, followed by cooldowns. It’s a setup I use on every class and it works because every class has almost a very similar set of skills.

And in some ways… that’s kind of dull. But it’s also very easy for Blizzard to balance, because when they design encounters they can just assume everyone has an interrupt and everyone has a movement skill, etc. Remember when only Horde had Shaman and only Alliance had Paladins? Remember when Dwarf Priests were the only characters in the game who could use Fear Ward, which made an insane difference in early raid encounters? (Really, if you were a competitive raiding guild without Fear Ward… well, you weren’t a competitive raiding guild.) Blizzard has gotten away from these balance issues by spreading abilities around (or removing them entirely). While homogenization can be dull, making every class bring a unique but necessary contribution could be frustrating when you didn’t happen to have that class handy. (Seriously, Dwarf Priests.)

So where’s the middle ground? How can they have classes be unique, but balanced? My guess is that we’ll see these homogeneous skills become a little less homogenous, but not restricted to a single class, giving every class more individuality without locking down groups into requiring specific class setups.

I bought Diablo 3 over the holiday & have been loving it. Barbarians? (I totally get it Matt) Mine has complete disdain for his adversary, I’ll kill you before you kill me, that sort of thing. Witch Doctors? For me, they’re more fun than anything in WoW. I want WoW witch doctors (not holding my breath but blow guns, zombie dogs, gargantuans, oh yes).

Q4tDiablo3Peoples: So, what do you want next? Diablo 4, another expansion, demonic dinosaurs? Gnomes?

Since new Diablo content lately has been… sparse, to say the least… I think most Diablo fans would say they want anything new. (Which would be followed up by the Diablo 3 team announcing a new piece of armor coming in the next season and Diablo fans facepalming and saying, “anything except another stupid piece of armor, we already have armor you nitwits, we have lots and lots of armor, so much armor our stashes cannot hold it all, did we really need another new piece of armor??” And you can quote me on that.)

What I’d love to see is new stories. New gameplay. New classes. The addition of Necromancers last summer was fun… but it didn’t add anything except a new class to play the same old content through. In addition to the class, it would have been neat to get some Necromancer-specific story alongside the gameplay. Something that grows the world rather than just throwing in more stuff, more stuff, more stuff! We haven’t had any notable story content since Reaper of Souls in 2014 and I’m starved for new story. I want to know what happens next.

Maybe that means Diablo 4. Maybe that means another expansion pack. Maybe that means bite-sized story-based DLCs. I would happily accept any of these things if it gave me something new to do in game other than starting over with each new season. (That said, I am thinking about a Necromancer for the upcoming season.)

TLDR: Anything. Almost anything.

Q4tQ: What class could/should Blizzard add to finally give us a third class that uses mail armor? As someone that mains a hunter, and my second alt being a shaman, I have never seen the point in buying looms for mail and want something to use them for (though if they remove the restriction on needing a 110 ally to unlock Velves, I may just lvl one of them as a hunter on a different server)

I think Ted really nailed this in the comments when he said Tinker, pointing out that, like Demon Hunters, they were a hero class in Warcraft 3. A mail-wearing ranged DPS/tank definitely breaks out of Blizzard’s mold.

And it’s pretty odd that they have a mold. Since launch, Blizzard has added three classes to world of Warcraft, and they’re all melee DPS/tanks — with Monks being the odd one out in that they also have a healing spec. All of the newbie classes are thrown into the meatgrinder of melee. If you want to play melee DPS, you have nine options. We could stand to mix that up with some classes with unique game roles — and, yes, adding more classes with mail armor because there’s only the two right now.

I’ve long wanted some kind of battle cleric, myself, but I suspect with the current class fantasy that role has fallen on the Holy Paladin and a new class would simply wind up being derivative. So let’s go with Tinkers.

Q for the Q (probably asked b4): Now that we can get an allied character, how will we get the third allied race?
Alliance example: With proper rep, we can get Void Elf and Lightforged Draenei characters. When will we be allowed to get Iron Dwarf characters?
Will we need to wait until the expansion?
/salute
4Azeroth

I’m afraid we’re probably waiting to play through the Battle for Azeroth story campaign — or at least part of it — to unlock the next Allied Races. Which is a damn shame because I really want to play a Zandalari Druid because dinosaurs. But by the time they show up, chances are I’ll be distracted doing something else and may not get around to it.

That’s all for now, dearest readers. I hope I don’t have to smite any of you, but please do let me know if I should break out the holy water or anything. I’m here to help.