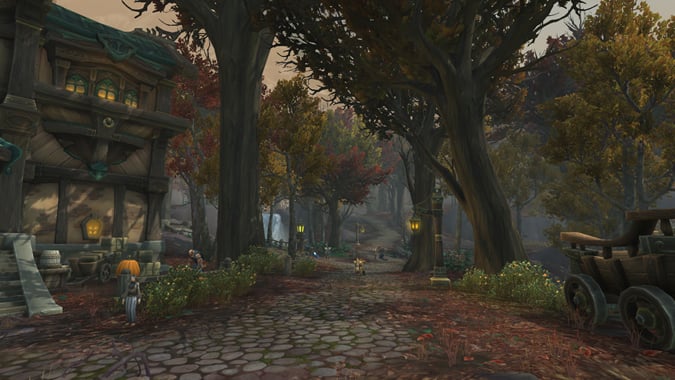 At the moment, there are only two zones on the Battle for Azeroth alpha open for testing – one Alliance, and one Horde (Editor’s note: two more zones opened up shortly before this post went live). While I primarily play Horde on live servers, I decided to check out the Alliance zone of Drustvar first. I mean, come on; I’ve been waiting for Kul Tiras for what seems like forever. At this point, I’ve finished every available quest and bonus area I could find in the zone, and my Alliance character is currently capped at level 113.

So how does it hold up against Legion? Let’s talk about that. Please note: This is pretty much a spoiler-free overview. You’re not going to find any story details in here, other than a summary of what the zone is about — the same stuff we’ve already heard at BlizzCon. If you avoided all that information, and you wish to continue avoiding it, you might not want to read on. Otherwise…hey! Let’s check out Drustvar and see what’s up on Kul Tiras. 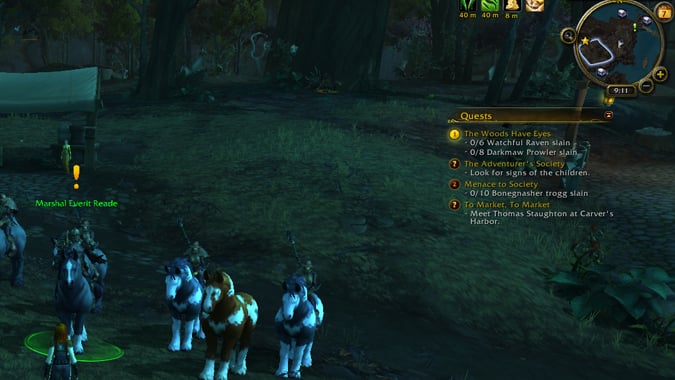 Drustvar’s got some serious problems — the land is cursed, and its leaders are missing. You’re no Geralt of Rivia, but it’s up to you to slay some monsters and solve the issues plaguing the land. This area is the same one that was available for play at BlizzCon 2017. If you attended the convention, you may remember the setup, or some of the quests. The zone itself is huge, with plenty of areas to explore and get thoroughly lost in.

As for the quests and gameplay…it feels much like the leveling experience in Warlords and Legion. There are branching questlines scattered throughout the zone and bonus objectives that will give you extra XP. There’s plenty of random treasure to be found and rare mobs all over the place, marked with the customary star icon on your minimap. Cutscenes will have a presence here, but they aren’t currently implemented.

One new mechanic is pretty interesting. Drustvar has some falconers among its population, and you get to take control of one briefly. Other than that short foray into an interactive UI, there’s not a lot of difference between Drustvar and what we’ve already seen in Legion. That’s not a bad thing at all — Legion’s leveling experience is superb.  There’s no reason to try and shoehorn something new into what’s already an engaging, fun experience. 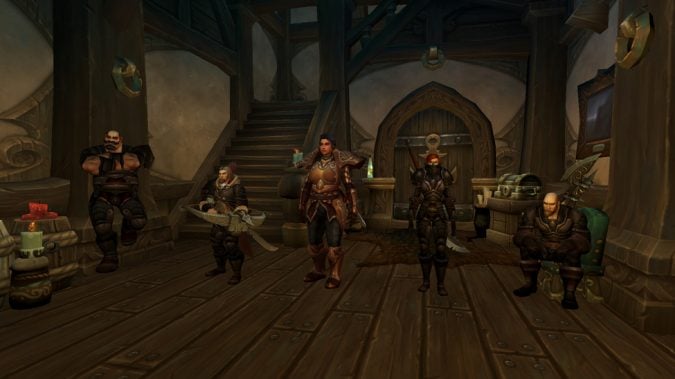 The differences between Drustvar and what we’ve already seen in Legion are mostly visual, and they’re absolutely striking. The environment is suffused with incredible amounts of detail. When you get around to playing the expansion, just take a look at any of Drustvar’s ice-covered lakes for an example. Or look up at the trees. Or make a closer examination of buildings and structures in the area. Individually, none of these things are anything we usually pay attention to. Together, they create a living, breathing environment, and set the mood far more effectively than we’ve seen before.

But it’s the residents that show the most major change of all. Citizens of Drustvar show off new idle animations like wall-leaning and carrying the aforementioned falcons aloft on their arms. And they’re wildly varied in build. There’s everything from barrel-chested behemoths to scrawny research assistants. It’s not just a variance in build we’re looking at here, but a variance in height as well – some citizens are tall, some are short. This might just be for NPC flavor, but I’m quietly hoping this means that someday, somewhere in WoW’s future, we might actually see height and build sliders on the character creation screen.

Non-playable character actors like children have seen an overhaul as well. Children in Drustvar are expressive, varied, and charming. No longer the blank slate cardboard cutouts of vanilla, these kids have an assortment of movement and poses that rivals any of the adults in the area. Critters and animal mobs have also received a visual overhaul – in some areas adorable, in others, completely horrifying. 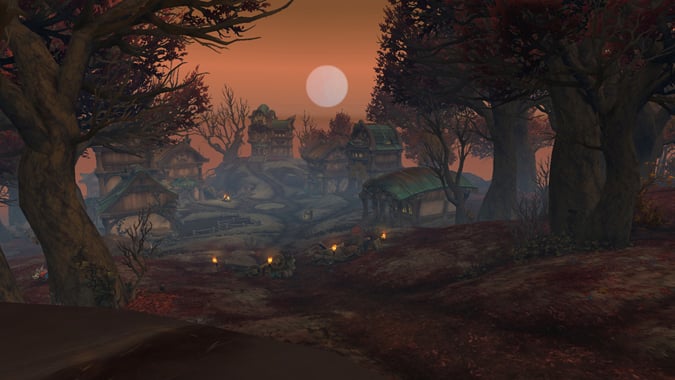 Speaking of horror…once upon a time, not so long ago, I mentioned my disappointment at WoW’s loss of what I called the “creep factor” with its Cataclysm overhaul. There was once a point in time where wandering around the Plaguelands was…not terrifying exactly, but unsettling at the very least. The place was haunted with ghosts of the past, some of which you helped find peace, most of which you killed. World of Warcraft isn’t a horror game, but there was something fun about having a few places where it felt like the entire land was turned against you.

The creep factor is back in Drustvar, in the best possible way. The place is cursed, which means haunted forests and other environments designed to catch you off guard. You never quite know what’s going to be around the next corner, and you’re never quite certain if that friendly face is really friendly. The zone storyline plays out like an extended mystery, and each chapter has its own unsettling reveal. The story winds its way through the zone, leading up to a conclusion that is as of yet unfinished, but shows promise of being pretty extraordinary.

Despite the creepy surroundings, the citizens of Drustvar are pretty fun to work with. They’re happy to accept your help, despite the fact that you’re a “mainlander.” There are characters you’ll see pop up multiple times over the course of the zone, each with unique personalities you’ll quickly grow attached to. The whole place is steeped in history – stories that you’ll uncover over the process of clearing the zone. For lore fans, this place is a home run. 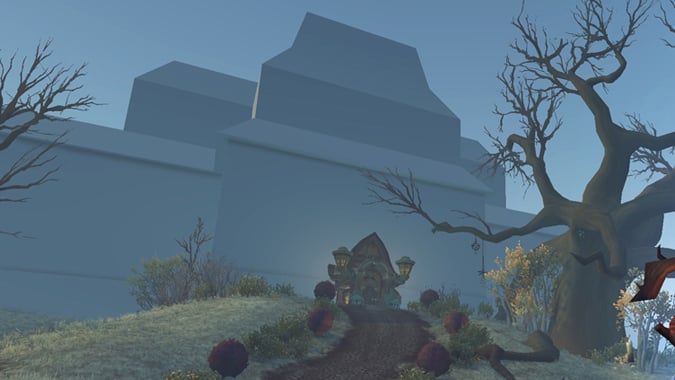 As of yet, the zone appears and feels unfinished. There are a few empty areas that feel like they should have something there, but don’t have anything beyond the usual terrain. Herb and ore nodes aren’t set in place just yet – professions aren’t even given to premade characters at this point. There’s an absence of critters and Battle Pets that makes some parts of the zone feel pretty sparse. There are some areas with unfinished graphics – blank gray pieces of scenery that haven’t had textures applied. And you have to watch your step in some places, because there are still holes in the terrain.

The main quests that usher you throughout the zone seem to be fairly complete. There were only two quests I couldn’t finish — one took place in a dungeon that wasn’t open for testing just yet, the other involved interacting with a bugged object. The bugged quest wasn’t a requirement for moving on in the main storyline, however. So far, it appears that the zone is a little more freeform when it comes to progression. There’s a natural path the story follows, but you can find plenty of quests just about anywhere while traveling through the zone, no prerequisites necessary.

All in all, the zone may not be polished, but it shows promise. Kul Tiras is just familiar enough to feel like it’s absolutely a part of Azeroth, but foreign enough that you definitely feel like you’re in new territory. That overarching push of Alliance vs. Horde is, by and large, completely absent here. There are bigger and better things to worry about, things far more personal to the people of Drustvar. Factional bickering may be the name of the game in other parts of the world, but on these murky islands, survival is far more important.