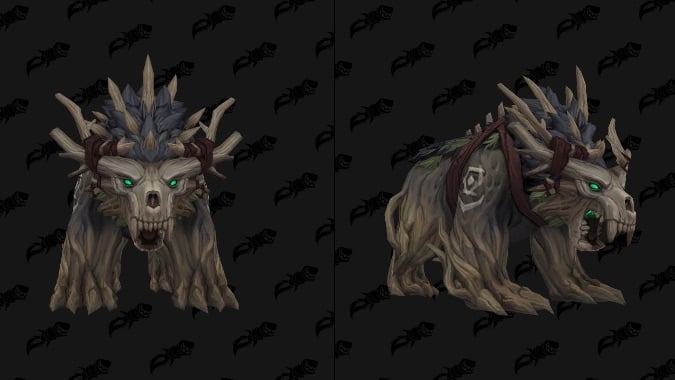 Once upon a time, there were just two races who could be Druids: the Night Elves and the Tauren. Their shapeshift forms were pretty similar. Tanks were bears (Tauren kept their horns, Night Elves kept their ears), DPS were cats (the Tauren with a lion-like form and the Night Elves with a panther-esque form), and Boomkin were… well… Boomkin.

When Blizzard added Trolls and Worgen to the Druidic lineup, forms still remained mostly the same across races. And when the Highmountain Tauren joined the fight as an Allied Race, they kept the same basic forms, only with the addition of their unique antlers in place of horns or tusks.

But now? Now new Allied Races are getting unique Druid forms. The Zandalari have a whole collection of completely incredible dinosaur-themed forms that are wholly (or at least mostly) unique. Seriously, they’re amazing. If Zandalari were in game right now I would be leveling one instead of writing this, leaving my co-workers (and my Alliance guildmates) to wonder what the heck happened to me.

In short: Zandalari Druids look amazing. That’s just a fact. Who wouldn’t want to play one of these majestic dino-birds? No one, that’s who.

But just when we thought Zandalari would be the must-play Druid race, Wowhead datamined a Kul Tiran Druid bear form. And, like the Zandalari forms, it’s not just a standard form with some new ears taped on.  (Which, it must be noted, implies pretty strongly that they’ll be an Allied Race at some point in the future.) The Kul Tiran bear form is frankly terrifying: a mix of gnarled tree roots and exposed bones that reminds me a lot of the aesthetic of Felwood. If Undead could be Druids, this is what I would expect them to look like… but instead it’s the Kul Tiran form.

All of these new forms leave me wondering: what about all of the existing Druid forms? Are previous Druid races just going to be bears with different horns and ears forever? Looking at these new forms, older forms really feel like they need an update. (Including the not-so-old Highmountain Druid.)

What do you say, readers? Do other Druids need their own unique forms? Or are we all just going to be rolling new races to get the newest, niftiest Druid forms available?