We’ve already gotten a look at the Zandalari Druid travel forms, their caster form and their tanking form. Now it’s time to take a look at their feral DPS form. It’s unique and distinctive. It looks less dinosaurian and more like one of the therapsida, the ancient order of beings that includes mammals and our reptilian ancestors. I’m not surprised that they didn’t just use a raptor, since they’d already used a raptor for their travel form. But I am interested in why this particular model — it’s a pretty big departure.

The folks at Wowhead have dug up the model with their datamining, and I have to say I’m not 100% convinced that it’s standing in the proper posture. Unlike the other Druid forms it doesn’t seem to have even basic walk animations attached. This implies that once we get further into development it’ll stand more like other Druid feral forms. Presumably, it’ll move like them as well. 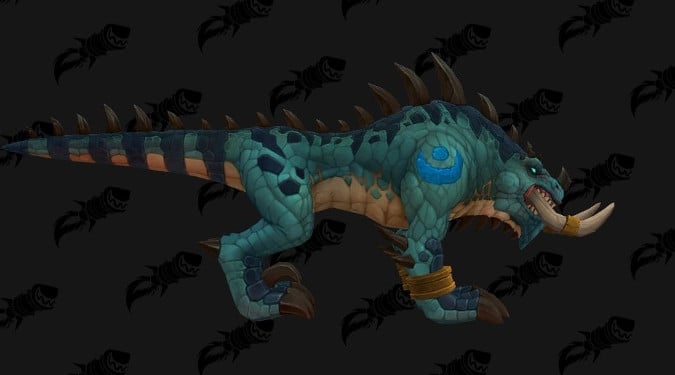 By making this ‘reptile cat’ model Blizzard has, consciously or unconsciously, made it resemble in basic body plan one of the Gorgonopsia, a group of carnivores that existed before dinosaurs which included the Kodiak Bear sized Inostrancevia. I’ve always wanted a gorgonopsid in WoW, so I’m definitely keen to see how this model shakes out. It’s likely going to move just like other cat druids do so it can have stealth. This will likely conflict with most reconstructions of the gorgonopsids. However, it isn’t out of the realm of possibility for them. After all, they are our ancestors. All mammals derive from and are technically part of the therapsida.

I’m definitely intrigued. We don’t actually know if therapsids had scales like this or were more like hairless mammals. They might even have had hair, but the fossils are old and often in poor condition so it’s hard to get more than a guess on things like that. Still, as a paleontology nerd I’m utterly thrilled to see a new model that keeps the ‘Dinomancer’ vibe for Zandalari Druids. Head on over to Wowhead for a complete view at this and all the other models.