The Queue: Are you talking to me? 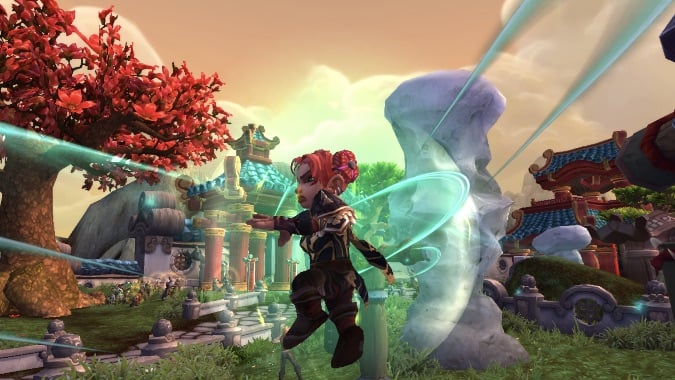 Gnomes are just fine, thank you very much. And mine is fully capable of kicking you in the face if you have a problem with that. Got it?

Okay then, let’s get on with the Queue.

Q4tLiz: how do I even do a Liz questions? What is the appropriate placement of skulls? She’s a gnome, does that mean I should offer platform shoes on the altar?

Anyway, down to business. You’re all about Gnomes, and Gnomes are all about engineering. This will be a rapid fire series of engineering questions. Why aren’t the Spider-tanks, and Mechsuits in Gnomeregan craftable by Engineers? Can we remove the engineering skill requirement from wearing goggles already? I’m tired of being poor (really, goggles go on head; it’s not that difficult), or let us craft stat-less goggles for xmog.

Lastly, are gnomes related to beavers? They’re both small, like crafting things, and have funny looking heads.

I’m not sure what you’re saying here,  but I am going to take it as a compliment. Probably.

So back to Engineering. The eccentric, unusual, and outright odd things Engineers can craft range from delightfully strange goggles to battle chickens. It’s a whole profession that seems to be built around the thinking “why not?”

Dev #1 says, “Why in the world would we add a battle chicken to our fantasy RPG?”

Conversations like this have to be responsible for half of the things Engineers can make.

The problem with giving the profession all of these ridiculous, awesome things is that Blizzard is immediately beset by the problem of balance. You (apparently) can’t just have a profession that lets you hurl explosives, survive falls, repair gear, resurrect players, teleport all over the world… the list goes on. So to keep Engineering from being too powerful as a profession, you get items like Wormhole Generator: Argus which teleports you to a random location on Argus and may kill you in the process. Whee.

So here’s my thought: Engineering needs to be a class. That would let players take full advantage of things like mech suits and spider tanks, which you could summon on a cooldown. Explosives could be genuinely powerful AOEs. They could teleport around like Mages. I’ve seen this suggested as a Tinker class, but I think the idea is really Engineering pushed to its full potential.

Which sounds like a heck of a lot of fun.

And what’s wrong with my head?! You know I can punch you, right?

Additional question about goggles: Why can’t engineers learn all the colours of goggle variants? There are different colour goggles for different armour classes and even engineers can only get the colours that fit with their class.

Spencer touched on the goggle thing too, and as I’m leveling my second Engineer right now, I have to admit my frustration with the same thing. I can make all sorts of cool-looking armor items, but transmog limitations mean I can only learn a fraction of them. And since they require Engineering to use, I can’t even mail them to alts to learn.What a nuisance for some of the coolest things Engineering can make.

I think, firstly, each variant needs to be craftable for each armor class, so you can wear and learn every look. Then Engineers really need to be able to make transmog versions of goggles (and their other weird tech) to share or sell. Because so much of Engineering requires Engineering skill to level, that leaves little to sell — which makes Engineering a pricey profession that you get into for a small handful of benefits. And some of these benefits are occasionally fatal.

Engineering is fun as heck, but needs to up its game. More stuff we can use (even if it’s not a combat useful balance problem) and more stuff we can sell would go a long way.

Q4tQ: why should I pickup Chronicle 3?

First off, I’m not a lore person and a lengthy tome of Warcraft history is precisely the sort of thing I’m not interested in. Novels, yes. Comics, yes. A history book? No, thank you.

However, I do think these hardbound books could be useful as weapons. It may be a useful self-defense tool.

Which Warcraft lore character is now most in desperate need of a redesign/fashion update? We’ve already seen Nathanos go through two redesigns, Sylvanas and Genn get new clothes, and Baine and Gazlowe both got updates lately. And of course Jaina.

Come on, you couldn’t really expect me to say anything else, could you?

She’s gotten armor updates expansion to expansion, but nothing that’s a Jaina-sized revamp. (Or a Sylvanas-sized revamp. Or an Anduin-sized revamp.) And I think a lot of our dragon friends are similarly looking a little tired (except, perhaps, for Alexstraza, who a unique armor set and a unique dragon form). Human and dragon both could do with an update.

However, I think it’s unlikely unless they’re central figures in an upcoming storyline, which… who knows. We haven’t heard about major dragonflight involvement moving forward, and until there is, it seems unlikely to happen.

1. Since Legion has been especially rich in hidden content, what would you recommend for a to-do list — especially of hidden (or possibly forgotten) stuff?
2. Are you soloing old content? Up to what expansion or raid? Any recommendations?
3. If you’re in the alpha, have you tried soloing old stuff? How’s that working out? What raid or expansion can you get up to?
4. Since we’re getting allied races now, and they seem to be mostly cosmetic changes, do you think we’ll see “allied classes” later, that are basically the same class, just cosmetically different? Like, a “life warrior” that is basically a death knight, but all of their spell effects are green and nature-y, they summon dryads instead of ghouls, and they can mog cloth instead of plate?
5. There’s a lot of speculation about where we’re going next… any places you don’t want WoW to go to?
6. Follow up question: If WoW did go to that place you don’t want it to go, what could Blizzard do to make it palatable?
Okay, that’s all I got.

Okay, this comment has packed a lot of questions in. Let’s see if I can hit them all.

1. I can tell you that my priorities are getting through class quest chains on alts so I can see more of the game’s story. (They’re tremendously long, but unique and interesting.) I’ve also been working on class mounts. (But, dang, how many times can you play through the Broken Shore before going crazy? Answer pending.)

I know a lot of my fellows are working on Mage Tower appearances and collecting other appearances, but, personally, the Mage Tower challenges drive me nuts. I’ll stumble across these as I can, but I’m not putting a lot of effort into them.

2. I don’t do a lot of soloing, and I’m not good enough at it to do anything particularly challenging. Lately I’ve been doing some soloing on my boosted Mage to collect cloth transmog and class sets, because I haven’t seriously played a cloth-wearer since vanilla and my cloth transmog game is terrible. But I’ve been working through Burning Crusade dungeons and raids which are absolutely trivial at 110. I suspect I could actually do pretty well on my main since my Monk got Prydaz, but I haven’t put any effort into it. (There’s so much else to do!)

3. I’m afraid I haven’t tried any old content soloing on the alpha.

4. I really think that Allied Races need something more than just “hey, this looks cool and different!” to have lasting appeal. At this point, my next Allied Race character… if I actually bother to make another one any time soon… will be a duplicate version of a class I already have. And I just don’t find playing and gearing the same class over and over to be particularly interesting.

There’s nothing new to learn, no interesting gameplay to discover. All I’m going to earn is transmog, and in the end I’m just going to have a second version of a class that has worse gear than my main of the same class. I even already have cross-faction duplicates of a couple of classes (Paladin and Priest). With at least four new Allied Races coming in Battle for Azeroth… how many times am I going to level up the same class? I’m already experiencing a bit of burnout on this front.

Adding something unique  — particularly ability-wise — to these Allied classes would get me interested. Why should a Lightforged Monk have the same bright green and blue ability effects when their whole thing is the power of the Light? We do get some unique elements with Druid forms and Shaman totems, but it’s minimal and doesn’t cover every class.

And why would each Allied have the exact same training as everyone else when their background is so different? What about the Nightborne, who have spent thousands of years in Suramar come out with nothing to show for it? Sure, they have different racial abilities, but racial abilities across the board have pretty minimal use. I’d love to see some class variation in these Allied Races… but I think it would be a complete balancing nightmare, and unlikely to happen.

Still, more races with the same old gameplay just feels dull to me.

6 & 7. I don’t think there’s anywhere the game could go that I wouldn’t go along with it. I have faith that Blizzard wouldn’t bother to spend time making an expansion that sent us somewhere dull, so wherever we’re going next… let’s go!

And that’s all for today, folks! Happy Wednesday and, really, be kind to a Gnome for me. (And also because it really hurts when they kick you in the ankles.)