WoW Cultists are channeling again. But it’s probably nothing. But maybe it’s something.

Twice now, we’ve been teased by the Broken Shore’s Xorothian Cultists. These cultists, as you may recall, occasionally start channeling a spell for an incredibly long time. The end of the channeling has so far coincided with two events. First was the release of patch 7.3.5, and then the release of the Seething Shore battleground.

Those crafty cultists are up to their crazy campaigns once again. They’ve recently begun to channel another fel-tinged spell. This time, the channel is set to end at roughly 8:30 p.m. Pacific on Wednesday, April 25. In relevant terms, that means we could be just over two weeks away from…something.

Most likely, the countdown is pointing toward the next chapter in the Silithus storyline. As you’re probably aware, we last left Silithus on a bit of an ellipsis. We still have yet to actually retire our Artifact weapons. Since both of these need to be resolved before Battle for Azeroth, this seems like the next logical countdown event. After all, we’ve had plenty of time pass since the first portion of Silithus’ story. Then again, we also have the Battle for Azeroth beta coming “very, very soon,” so it could also be referring to that. 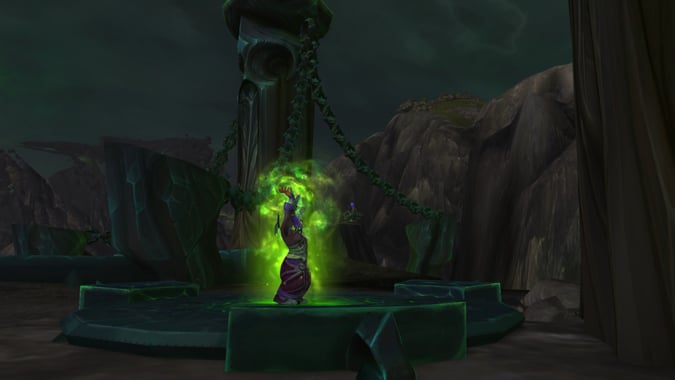 Another possibility? The cultists are counting down to absolutely nothing. Over on Reddit, Simca from MMO-Champion posted a long and detailed potential explanation of the countdown. The channeling could very well be related to nothing more than 32-bit unsigned integers. If you have no idea what that means, Simca does a thorough explanation in the Reddit thread. Thankfully, Simca also posted a TL;DR for people who hate having their brains wrinkled:

The duration between the Cultists channel end dates is just the largest value of milliseconds the game can hold, and for exactly half of that time, the game masks the channeling cast from the player because it thinks the channeling time is negative. Blizzard is not directly controlling any of these values intentionally, as such any events “connected” to these casts is entirely coincidental, and the community shouldn’t get hyped when they restart casting.

However, the one aspect of all this that’s giving me pause is a sneaky designer by the name of Jeremy Feasel. That dude is responsible for some of the game’s craziest, most elaborate secrets. It wouldn’t surprise me if he’d thought of all this beforehand and intentionally matched the Fel Channeling duration to the maximum value of a 32-bit unsigned integer.

So can we say anything about the Xorothian Cultists and their questionable channels? Not really. Though it also couldn’t hurt to keep an eye on April 24 for something new to make its way to World of Warcraft. Personally, I don’t care if any of this is intentional or not — I’m always happy for more content.