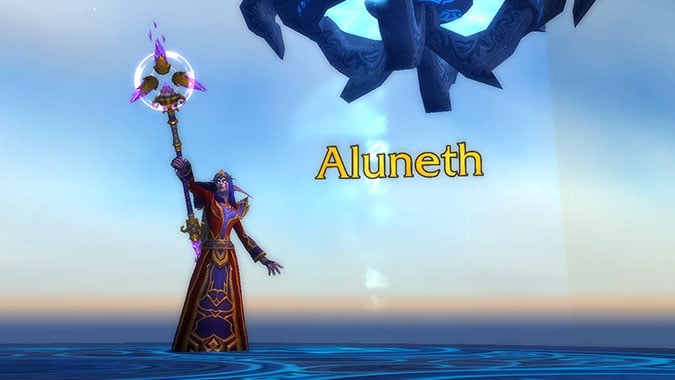 Beta tests are full of fascinating things. Sometimes, they’re full of me making a Mage on the Beta trying to get a magic stick to talk to me.

Reddit poster Sergrand noticed that currently on the Battle for Azeroth beta, he could transmog to Aluneth and it would still talk to them. Some experimentation followed with Xal’atath and the Skull of the Man’ari and those transmogs were also found to whisper to the player as well. Which is pretty awesome if you’re a Mage, Warlock, or Priest and you want to keep having your weapon whisper at you in Battle for Azeroth.

However, it must be stated that this might or might not be intentional. I tried to transmog to Aluneth on a Mage this morning, and despite the weapon being in my Mage’s collection, I couldn’t get the transmog vendor to actually transmog my weapon to it. I don’t know if it’s been disabled due to a bug, if there was some glitch I don’t know about, or what. Beta gonna be beta and all that.

Still, I know a lot of players who would very much want this to be true. At present, you have to transmog like to like — Aluneth requires you to use a staff, Xal’atath needs a dagger, and the Skull is an offhand item. You have to transmog their appearances over one of those items to get to hear their whispers, so if you’re looking for a chatty weapon you need to keep that in mind. Blizzard, if you made some kind of mistake that allowed this to happen, consider not correcting it. A lot of players would desperately like to keep adventuring with their talking Artifact, despite the fact that Aluneth is catty, Xal’atath is pure malevolence, and the Skull is a petulant demon who is mad he died and wants everyone else to die too.

As a transmog addict I can only say that letting these kind of things stay is good, in my opinion.

Blizzard Watch is made possible by people like you.
Please consider supporting our Patreon!
Filed Under: Aluneth, Battle For Azeroth, Skull Of The Man’ari, Transmog, Transmogrification, Xal’atath
Advertisement