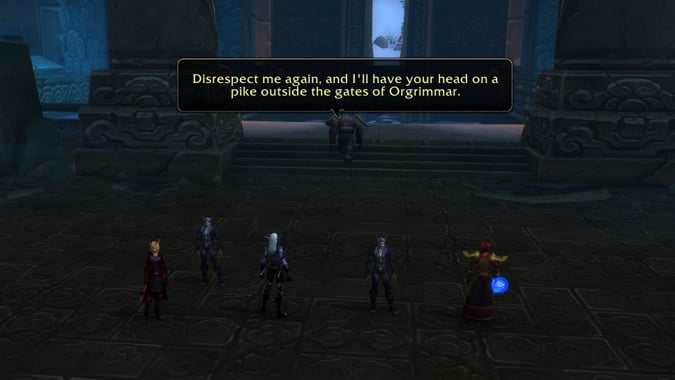 I went back to do the Dominance Offensive quest chain on an Allied Race alt and man, I still wonder what Thrall was thinking when he put this guy in charge. I mean…people skills should probably be part of the job description, you know?

QftQ: Will you still be able to do the Chromie scenario once BfA comes out?

Absolutely! There’s been no mention of that content being removed — and it’s not really main storyline stuff with crazy rewards or anything, so there’s no reason it should be removed. If you’re looking to get all the achievements cleared for it, however, I’d recommend getting it done before the 8.0 patch. It’s likely to be easier now, when you’re really familiar with your class and your gear, then after the patch, when class changes, the item squish, and losing your Artifact weapon abilities will likely make it way more challenging.

Has anyone checked if there is anything new for the Fire Festival this year?

There is nothing new this year for the Midsummer Fire Festival in terms of rewards you can purchase from a vendor. However, Ahune’s rewards  — the capes and the Frostscythe — have all been scaled up to 880. We’re nearing the end of the expansion, so I imagine all attention has been turned to making sure Battle for Azeroth is ready to go, rather than adding new stuff to older content. Maybe next year we’ll see some new stuff? We can hope, anyway.

Q4tQ: does the fire festival boss scale? How low can you be to queue up for him? 20? Does he reward an insane amount of exp for killing him?

Ahune does scale, and you can queue up for the encounter as early as level 20. I don’t have a level 20 currently kicking around, but I went ahead and queued up on a level 41 Monk. The quest when you queue for the encounter rewards 10,450XP  on a Monk  — keep in mind that’s with the Monk XP buff & heirlooms. As far as killing him goes, the quest says it grants “a significant increase to player experience.” It ended up being around 50k or so total when the boss died.

Don’t forget, you can also go visit bonfires to pick up additional XP and gold for little more than travel time. It might not be the most expedient way to grind out levels, but it’s a nice break from questing, if you feel like you need one.

Q4tQ: Do you think Khadgar’s Wonderball toy is actually him projecting into it, like Harry’s Mirror was for “Dumbledore” in Deathly Hallows, or just a facsimile of him?

It’s just a fascimile — he tells you as much when you turn in the quest to get the item.

“Now, look here! I have imparted all of my substantial worldly wisdom into this globe, in addition to my ruggedly handsome features. No doubt you will find my counsel invaluable in your travels.

I could only get it to say a handful of phrases, however, so be VERY SPECIFIC in your questions.”

Question for the Queue: with legion coming to a close, do you think there is any chance of getting the ravencrest armor or warden armor as transmog sets?

This close to the end of the expansion, I doubt it — unless they wanted to retroactively add that in later on. Part of me wishes they’d come out with cosmetic sets for all of the various reputations we’ve encountered out there over the years. I mean, can you imagine what an Arakkoa transmog set would look like? I bet it’d be really cool. And it would give players another reason to go back and finish off those reputations they might have passed up on the way to max level, you know? I mean yeah, it’s old content, but it’d be another way to make it relevant again.

Plus there are a lot of people out there that are absolutely nuts about transmog and will happily chase down any new cosmetic option the moment it’s released, just to add it to the Wardrobe. People like me. I’m nuts about it. …maybe someday we’ll see it?

Q4tQ: So what is the lore behind a hearthstone? When did they come into the world? How is one provided one on azeroth? Who makes them?

There isn’t really any lore surrounding the origins of hearthstones, actually. And it’s kind of weird — in novels, hearthstones are mentioned as being kind of rare, exceptional things. When a character gets a hearthstone, it’s treated as a pretty big deal. In game, we have them all over the place — and if you lose yours, you can just visit any innkeeper and pick up another one. So there’s a big discrepancy between the game and the novels as far as that goes.

As for where you get one, the ones presented in novels are usually stones that were crafted by magic-users — either Mages or in one case, a Warlock. The runes on a hearthstone refer to the location they’re set to, and they have to be attuned to the user to be functional. Or in game, like I said, you just go to the innkeeper, who presumably has a never-ending barrel of the things tucked behind the counter to hand out to absent-minded adventurers.

It’s just one of those cases where an item that’s useful from a game mechanics perspective eventually found its way into the lore — but it’s been written as a different kind of thing.