The Queue: Pride festivals in WoW and other Blizzard games, patch timing, and quests while leveling 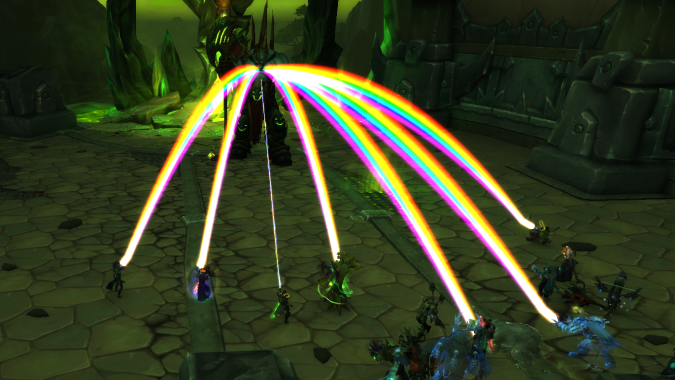 Let’s get into the Queue.

Should Blizzard include a pride event for pride month?

Off the bat I have no standing to say what Pride Month is for anyone but myself. While I feel strongly for rights and equality for everyone, I don’t have the perspective that some of my best friends do. To me, this month has always been about celebrating individuals who have had to put up with a lot of hate, and in particular having pride in them that they’ve persevered; and those that can’t participate yet will persevere too. I am so proud of a few individuals in my life that really have been through hell and back, I can’t think about their stories without tearing up. So to me this is the month where a lot of people stand up against homophobia and all the various forms of otherness that people try to cast in a negative light and simply say “Hell no!”

A couple years ago Blizzard Staff wore rainbow pins at BlizzCon. They are an incredibly diverse company, and that diversity is part of their core values. That is starting to be reflected in their games more, and I’m incredibly happy to write news about a company that has pride in the same things I do.

I don’t think the gaming community as a whole shares that pride yet, although I think it’s getting close. There are communities and guilds in every game I’ve seen where this diversity is shined upon. I join those types of guilds because they share the same values I do, and I don’t want to be around people who look down on someone because they’re different or who use gay as an insult.

Blizzard has an opportunity to show leadership and celebrate Pride in-game — for all of their games. They can sponsor an in-game parade, provide rainbow generating trinkets for everyone, and help create an atmosphere that is positive and inclusive. They would need to hire a cadre of temporary moderators to ban people, but I’m sure half of the game designers and developers in the area would show up if they asked for volunteers.

And finally, I want to reprimand myself a bit. I originally answered this over Twitter last night and said that I didn’t want to include it in the Queue because of the inevitable cesspool of comments that emerge over these topics. But you know what? That isn’t us — it says so on every article: “Blizzard Watch is a safe space for all readers.” Over the years myself and my friends help celebrate Pride Month. Blizzard Watch does in our own way as well. Anyone who wants to be negative and get nasty? Liz and I await you with a banhammer that even Thor would be impressed with.

Wowhead is reporting that the Wow mobile app will be discontinued July 11th. I am wondering if that date might also be a good indication of the patch drop.

I wouldn’t read into it too much. While I believe discontinuing an app in the iTunes App Store is more or less automatic (sans caching and syncing delay) when the manager hits the remove button, Apple can be very weird with the way it handles apps, to the point that most businesses put things together ahead of time and then coordinate with Apple (assuming their business is big enough, which Blizzard is) to make things go as smoothly as possible. However any product manager worth their salt (me, I think) would tell you that app store actions are rarely directly timed with business announcements/decisions.

Friend says she lost profession recipes in Beta. Has anyone else lost theirs? I have to check on my BS to see if he still has his. I am greatly fearing that he will lose recipes that are no longer obtainable in game.

I logged in and noticed that too. I don’t know if this is intentional or not, but I’ve seen this behavior before on PTR and Alpha / Beta servers, so until we hear from Blizzard I think it’s safe to assume it’s just a translation quirk.

That being said, I kinda wonder if this is intentional … Blizzard may be clearing out old items (and replacing them with transmog equivalent drops, or at least they better be) and generally making things slimmer. The profession system needs an overhaul badly, so it wouldn’t surprise me if this something we hear about soon or is on the horizon at least.

Q4tQ: When you level a character through content you’ve done a few times, do you still read the quest text? Do you listen to podcasts/music/watch tv?

There’s parts of lore and the story overall that I’m not clear on, so I’ll read the quests texts more carefully on those and pay attention to what I’m doing (as well as what the NPCs say to each other during or after the quest is completed). So when I’m leveling an alt it’s useful for me to do that. Of course I have a bit more invested in keeping up with the lore than most people and don’t like having to turn to KYL or Google at every question, so this helps.

When I hit the last couple expansions though? It’s auto pilot. I’m likely watching a season of Star Trek: TNG, South Park, Futurama (NOT JURASSIC BARK. NEVER EVER EVER. YES THIS DESERVES ALL CAPS.), or some other show that I’ve enjoyed over the years and it won’t kill me to miss some dialog or moment. I’ve got a second 27″ monitor connected to a different computer for this now, but I’ve used my iPad or TV up in the living room too.

At some point I think the Blizzard Watch staff needs to show all our battlestations (computer setups). Maybe after the new writers arrive … which will be soon ™.