Know Your Lore: The mystery of the Diablo Crusaders

They are not Paladins. It goes all the way back to their founding under the Zakarum cleric Akkhan. At the time, Rakkis was setting out for the west, his mission from Emperor Tassara to spread the Zakarum faith to the heathen westerners coinciding with his own desire to save the faith from the decline he saw in his native land. For Zakarum was being corrupted from within. The Horadrim had chosen the Zakarum Temple of Light in Kurast for the hiding place of the Soulstone that contained the Prime Evil Mephisto, but even the faith of the Zakarum was no match for the demon lord.

Rakkis wisely sought to take the Zakarum faith west, where it would be able to rise again stronger than ever. He also sought the lost Nephalem city of Corvus, seeing the Nephalem as near-divine figures. But Rakkis wasn’t the only one to see the corruption in the heart of Zakarum beginning to spread. While Rakkis’ forces contained many Paladins, the priest Akkhan chose a different way to fight the spreading corruption in the heart of the Zakarum. Akkhan’s path led to the creation of an entirely new kind of holy warrior. 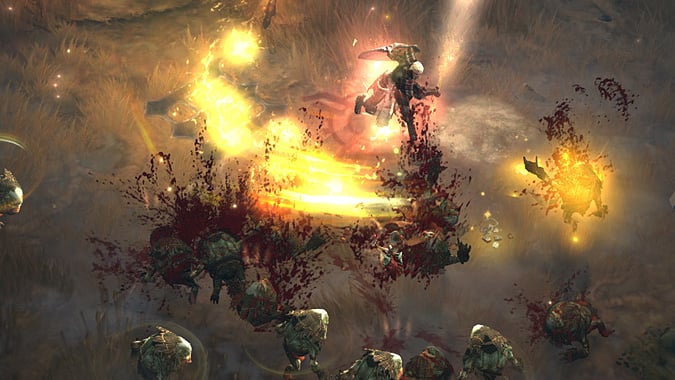 It should be stated that the Zakarum faith had used the term “crusade” before Akkhan. In its spread from an isolated order in the temple city of Travincal, attached to Kurast, to the dominant faith of Kehjistan there were many crusades. Indeed, even Rakkis’ journey west was seen as a crusade by the Zakarum, even while the corruption of Mephisto was spreading through Travincal. A century and a half after Tal Rasha had entrusted the Soulstone to the then-monks and aesthetics of Travincal, the Zakarum who had sprung up around the Temple of Light decreed that they would spread the light of Zakara throughout the known world. Many missionaries left, and often were unprepared for the burdens of attempting to proselytize in Akarat’s name.

This led to the foundation of many holy orders such as the Paladins, who defended the faith and those professing it. These crusades were outward focused — they were to spread the message that Akarat had received, supposedly from the Angel Yaerius. Akarat was himself a Xian acetic who came to live in Kehjistan and who spread his message of Zakara — the inherent light he believed dwelled in all men and women’s hearts — throughout his life. He vanished, heading east from Travincal, when he believed he’d done all he could to spread this message. In truth, the church that sprang up in his wake was not an organization he’d ever intended to create. But it grew with the common folk of Kehjistan and prospered over hundreds of years.

Akkhan, like many of his time, was dismayed with what he was seeing in his beloved church. What he didn’t know was that the hierarchy of the faith had fallen to Mephisto. The Que-Hagan and the Inner Council were the puppets of the demon. Akkhan’s position was lowly enough that he wasn’t included in the rituals that Mephisto used to spread his control over the faith. But he was high enough that he could take steps to counter the corruption, even though he didn’t know the source. Thus he conceived of a new crusade — one that was turned inward to examine the very heart of Zakarum itself.

Akkhan moved carefully. He recruited warriors who shared his sensibility, making sure that they were strong in their faith, and absolutely none of them were Paladins. He feared the Paladin orders were somehow already corrupted by the Zakarum hierarchy that he rightfully distrusted. While Akkhan himself was unimportant enough to escape notice, the heads of the Paladin orders were not.

In the end, Akkhan found 427 men and women that he believed could accomplish his goal. For Akkhan didn’t seek to spread the word of the Zakara, the inner light within all people. Rather, he sought to restore it to prominence in the Zakarum faith as a whole. So he charged his new order with a sacred mission — to retrace the steps that Akarat himself had taken and travel east, seeking a way to purify the Zakarum.

After the new order had departed Travincal on their mission, Akkhan dedicated the rest of his life to finding and uprooting the corruption at its heart. This proved the wisdom of his creating and sending the Crusaders away, for he died as Mephisto tightened his hold on the Zakarum. Ironically, Rakkis and his Paladin followers had departed for the west by then, which spared them much of the corruption that infested the Hand of Zakarum and other Paladin orders in Kehjistan.

The Crusaders ended up traveling into the Swamplands, an unclaimed territory on the edges of Sanctuary, far to the east of Kehjistan and separated by a mountain range. So isolated, the Crusaders  had no idea what was progressing in the heart of Travincal and Kurast. They had no way of knowing that Mephisto had since had one Que-Hagan assassinated and taken control of his successor. Instead, they journeyed the land, seeking always a means to find Akarat’s path, or otherwise purify the Zakarum faith.

The native people of the Swamplands were, by and large, a irreligious and anarchic lot. But they respected the Crusaders’ purity of purpose and strength of arms. After years living among them, the Crusaders succumbed to age or the hazards of their chosen task and died, but many of these warriors had taken on apprentices that they trained in the same ways that Akkhan had trained them. These apprentices would take up the Crusade in turn, and go so far as to take up the very name of those that had fallen.

This practice has continued to the modern day. The order has dwindled to a degree — when there were 427 Crusaders sent east by Akkhan, there are only 341 alive today. Not all of Akkhan’s chosen found heirs, and even those that did were not all successfully replaced in turn. But considering the rigors of their lives spent wandering Sanctuary, fighting any and all manifestations of evil they encounter, the Crusaders have done well to endure as much as they have. They range all over the world, seeking to purify their faith by any means necessary — and this includes the destruction of every single demon they encounter.