The Queue: You missed when Time and Life shook hands and said, “Goodbye.” 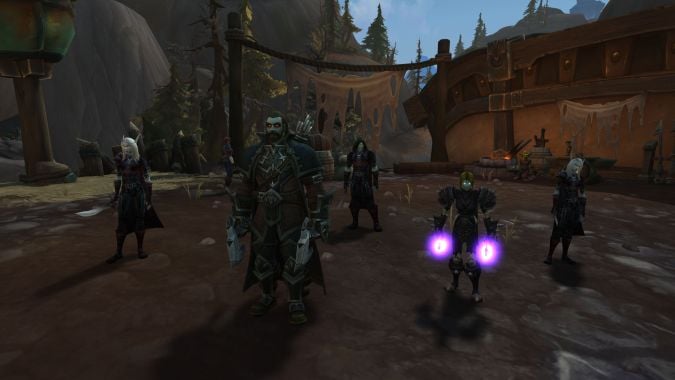 Hello! Apologies for any confusion my absence yesterday might have caused. As you probably guessed (or were told by Liz), I was in the middle of some serious HARDCORE GAMING. But I’m back now and can report that level 120 is full of… well, max-level content. I didn’t do most of the cross-continent content on beta, so it’s all new territory for me (as opposed to the leveling zones, which I did at least once each, if not twice).

HUSSKIES AND I DISCUSSED THIS BUT…

Oh man.. The Champions of Azeroth emissary turn in is in Silithus.. This is gonna get old really fast.

I’m posting this here for visibility, even though we already discussed in the comments. There is a portal to Silithus in your faction’s capital city on the new islands (Kul Tiras or Zandalar), so you don’t need to make a long trek to Magni every time the Champions of Azeroth Emissary is up.

DJOA, I WISH WE KNEW…

Has it been said when the last Warbringer would be released? I would have thought they would do it with launch.

I thought maybe we’d see it during the questing experience, since several areas on beta mentioned Azshara — but looks like no dice there. Maybe it’ll be pre-8.1 hype? (Like, early October.) Or maybe it’s tied to raiding content, which would be around mid-September.

ENO WANTS TO KNOW ALL ABOUT…. ME!

QfMitch: Mitch, seeing that you’re now level 120 I wanted to ask:
1) How long did it take you to feel that sweet, sweet feeling of accomplishment?
2) How many snacks, bathroom breaks and any other interruptions did you have?
3) Have you had any sleep yet?

For those who don’t know me, expansion launches are my thing. I love grinding to max level as fast as possible, of staying up at all hours playing the game. It’s what I do, and I’m already looking forward to the next time it happens. (Oh, and before you say it, I took my time reading all the quests and such on the beta specifically so I could zoom through them on live.)

KALCHEUS WANTS TO KNOW WHO GETS PREFERENTIAL TREATMENT:

Q4tQ: What’s your favorite new race in BfA so far?

First to jump to mind are the Snek People, just because I love their design and movements and aesthetic. But I think personality-wise, the Tortollan win. Their inability to tell male/female players apart while also calling a bear their “dog,” and their extreme fascination with stories makes them feel very fleshed out.

That said, I haven’t done much of the Alliance side of things. I assumed you meant friendly races, too — because all the creepy witch people and their weird ManBearPig creations in Drustvar are totes my aesthetic.

THE47THMAN HAS A GREAT QUESTION:

Are you supposed to be able to track how much Azerite you’ve picked up? Because I can’t. When I started gaining chunks from mobs/questing, I kept going into my bags, expecting it to work like Artifact Power, but the chunks weren’t there. But I also couldn’t see a counter for it anywhere in the Azerite armor interface, and it doesn’t seem to be tracked in the Currency tab (unless my reading comprehension is bad?). So, basically what ended up happening was that I just kept questing, and occasionally the UI would tell me I could pick up a new trait. It just seems weird I can’t keep track of it myself. So: is my UI bugged, somehow? Or is this, in fact, a feature?

There might be an addon that will do this for the sum total AP you’ve collected, but right now, it should be showing up as a progress bar below/above your XP bar, just like AP did in Legion. It will only show your current X/Y progress for whichever rank you’re on, though.

If you, like me, were not given your Heart of Azeroth until several hours into the game due to a bug, then there is apparently not an internal system tracking earned AP. I was told by a GM that they could not retroactively award AP for any of it I had earned while HoA-less.

MAALIN ALSO HAS A GREAT QUESTION:

I should know this but… where do azerite armor pieces come from? It’s pretty clear I’ll need 2 sets, and soon.

So, there are three slots that can be Azerite Armor — head, shoulders, and chest. You can get them while leveling for “milestone”-type storyline completions. But mostly, you’ll be getting them post-120 via dungeons, World Quests, and rares/treasures*. I still don’t entirely get how the Azerite Trait system itself works, though. I picked up a lower-ilvl chest that required HoA levels 12, 16, and 20 versus my current chest which was something like 2, 5, and 8. And the Traits themselves did not feel stronger, so… /shrug

*Cannot 100% confirm rares/treasures from experience, but I wouldn’t be surprised if they had a lower percent chance.

CYPHER HAS A NON-WOW QUESTION!

In non-WoW QftQ: How does everyone like this year’s Overwatch Summer Games skins? Nothing really draws me this time…though I may get the Moira Tennis highlight.

Ana and D.Va are fantastic, if you ask me. But everything else has been kind of “meh” for me. They’re very well designed, mind you, I think it’s just maybe I’m just not much of a “sports” guy.

Q4Q: as a new player, should I go back and do ANY content or should I just continue on on my level boosted warrior and forget the old stuff?

It totally depends on what your goal is for the game. If you only want to experience current content for the sake of gearing and pushing top-tier raids, then you have no reason to go back. If you want a fuller picture of the story, then it’s worth leveling a new toon to see at least once, because there are some seriously spectacular quests out there. (Though I wouldn’t blame you for just looking at a Wiki page or something for a summary.)

If you want to look good while you kill, there are lots of old armor sets to be found for transmog. If you pet collect, those things are also all over the place.

Basically, if your only goal is getting gear and progressing in a meaningful fashion, you don’t have to go back. But if you like collecting/being a completionist, go back and do some of the other stuff.

My advice? Just play the game and see where it takes you. Some of the most fun of playing an MMO is going in blind and discovering what the world has to offer. Maybe you find something utterly meaningless in terms of progression but at the same time, the exact thing you’d always dreamed of finding in a game. Follow that interest! There’s no right way to play :)

That’s it for today, folks! I’m gonna go hang out with my Dark Ranger posse some more now.