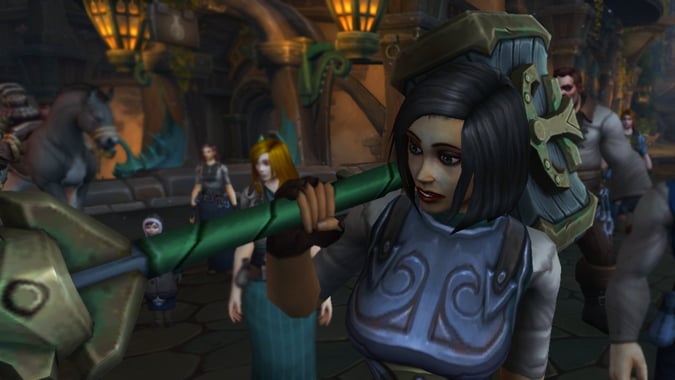 Taelia is one of the first few people Alliance players meet in Kul Tiras. Together with her friend Flynn Fairwind, she helps Alliance players escape Tol Dagor and complete their opening journey to Boralus. But she doesn’t stop there – she’s incredibly helpful in unraveling the mysteries surrounding Kul Tiras, and the problems it faces. Clever, brave, and light-hearted, Taelia is a pretty constant companion and eventually, a good friend.

She’s also holding a secret potential lore-bomb that is just ticking away until the moment it finally goes off.

This week’s Know Your Lore contains spoilers for the Alliance quest chain in Kul Tiras. If you have not completed the Siege of Boralus, you might want to hold off on this column until you do. 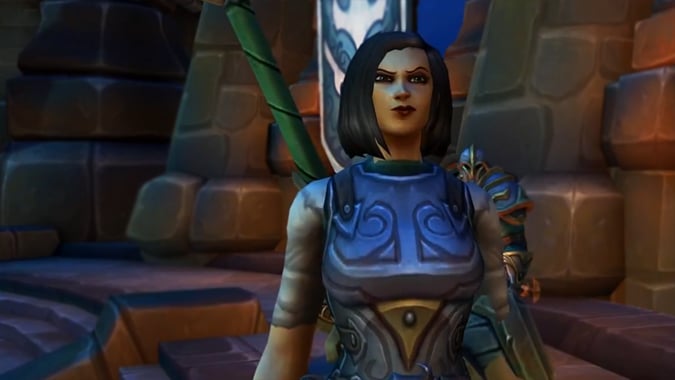 Taelia isn’t from Kul Tiras, although she’s rightfully just as adept as any Kul Tiran when it comes to seacraft. She originally hailed from Lordaeron, in the days of the Third War. The rise of the Scourge killed her mother and caused her father to send her to Kul Tiras. There, she could be raised away from the Scourge, the War, and anything that might harm her.

Surprisingly, her guardian in Kul Tiras was hand-picked by Lord Admiral Daelin Proudmoore. But maybe it’s not that surprising – given the loss of Daelin’s son Derek, and the way he leapt to go find his own daughter and the survivors that had fled to Theramore, it’s apparent that the safety of sons and daughters was a concern for Daelin. Daelin chose one of his most trusted knights to watch over Taelia, a man named Cyrus Crestfall.

Cyrus raised Taelia as best as he could, and the girl flourished under his care. He taught her how to ride, how to fight, and how to sail – and by the time she entered the Proudmoore Guard, she was better trained than even some of her instructors. And as she grew, she heard tales of Lordaeron – the great kingdom it had been, and the way it eventually fell. Taelia knew her mother had died to the Scourge, and she knew her father had given his life fighting the Lich King. But that was all.

Her assumptions were … almost accurate. But not quite. 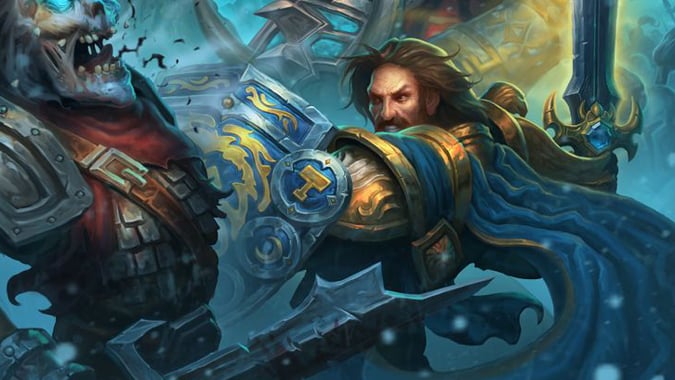 Taelia wasn’t just some commoner’s child in Lordaeron. She’s the daughter of Bolvar Fordragon, who served for years as a knight and at one point Regent of Stormwind. Even after the Third War was long over, Bolvar let his daughter remain in Kul Tiras, safe and sound. While Taelia spent her days learning and growing at Cyrus’ side, Bolvar continued his work in Stormwind, writing her letters whenever he could.

And Taelia was mostly correct – her father did, indeed, fall while fighting the Lich King. What she doesn’t know is his fate following his fall. Bolvar didn’t die. He was held in a state between life and death, thanks to the flames of the Red Dragonflight at the Wrathgate. Everyone assumed Bolvar had passed on, until he was discovered in Icecrown Citadel, bound, horribly disfigured, and being relentlessly tortured by the Lich King.

But Bolvar didn’t break – his will was so strong that even the Lich King couldn’t break him. And when the Lich King eventually fell, Bolvar stepped in, stopping Tirion Fordring from claiming the Helm of Domination and taking the grim task upon himself. There must always be a Lich King … and for now, that role has fallen to Taelia’s father.

And in Boralus, the letters from Taelia’s father simply … stopped arriving. Word eventually reached Kul Tiras that Bolvar had fallen in battle. The Lich King was dead and Bolvar Fordragon died with him. 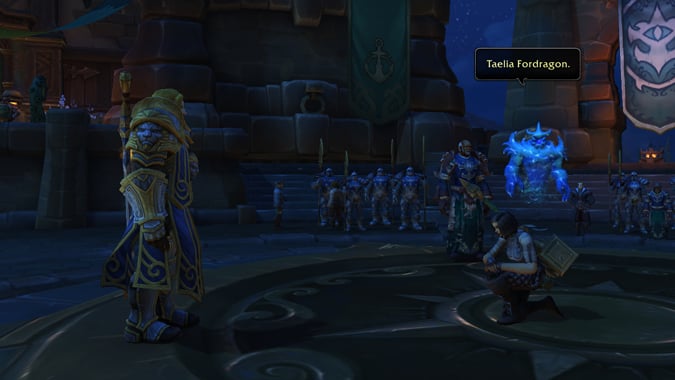 Once the Siege of Boralus was brought to a halt, Kul Tiras formally joined the Alliance.  King Anduin Wrynn traveled to Unity Square for the ceremony, happily welcoming Kul Tiras back into the Alliance. Once the ceremony was over, Lady Katherine Proudmoore introduced Taelia to the King of Stormwind, and her lineage was at last revealed.

Bolvar Fordragon was no stranger to Anduin – in fact, Bolvar was once almost like a second father to him, after Varian was kidnapped by Onyxia. But Bolvar never really mentioned his daughter in great detail, save that he wrote her letters. He had a nickname for her that Anduin remembered: “My shining star.” In everything that transpired after Bolvar’s death, it appears Anduin simply forgot about Bolvar’s daughter – but then he was busy growing up himself, in the midst of war, conflict, and cataclysm.

After their introduction, Anduin suggests that Taelia visits Stormwind when time permits, so he can share the many stories he has about her father. It’s a heartfelt moment and the emergence of an exceptionally heavy lore hook that will eventually need to be addressed. Because Taelia doesn’t know what really happened to her father. According to Tirion after the Lich King’s fall, they kept Bolvar’s role in what happened afterward to a scant handful of people.

The resurgence of the Lich King

Here’s the big issue – we don’t know how many people Tirion told. We don’t know just who is aware that Bolvar is sitting on the Frozen Throne. But it’s immediately clear that Cyrus, Lady Katherine Proudmoore, and the nation of Kul Tiras as a whole had absolutely no idea – or if they did, nobody bothered to say anything to Bolvar’s daughter. They simply let her live her life couched in semi-ignorance, aware that her father had fallen, yet unaware that he still lived on…in a fashion.

The Deathlord did so with full knowledge that the Lich King would reclaim Acherus if they fell. But Bolvar gives some clarification to that statement and says that while Arthas may have sought revenge on the citadel, he has…other plans for it. What those plans are is something we never find out, because the Deathlord’s mission is a success. 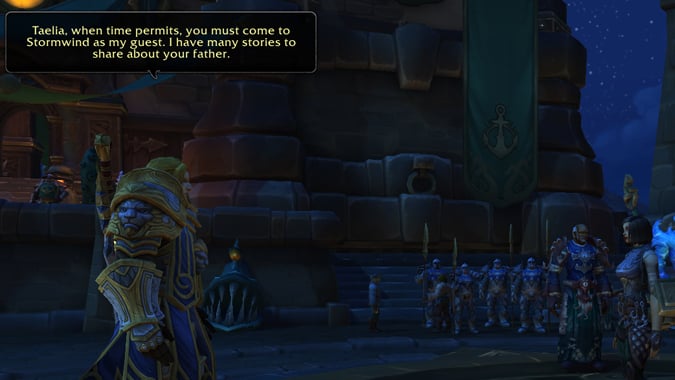 What does this all mean for Taelia? It means she’s eventually in for a world of heartbreak, if and when her father’s true fate is ever actually revealed to her. Taelia’s lineage is more than just a casual reveal – it’s the setup for another story, somewhere down the road.

We may not see that story play out in Battle for Azeroth. At the moment, the focus of the expansion is primarily on the war between factions, although other story elements have come into play. But so far, we’ve seen nothing that involves Bolvar or the Scourge directly…other than the moment Taelia finally said her last name aloud.

Taelia is a wonderful character, one who ends up being fully rounded out as a personality in her own right long before it’s revealed that she’s of Fordragon blood. But while it’s delightfully clear that we’re not done with her story – it simply has to continue after that impactful reveal – one has to wonder where her story will go from here. Will Taelia ever learn what really happened to her father? What will she do when she visits Stormwind at last? We’ll have to wait and see to find out.