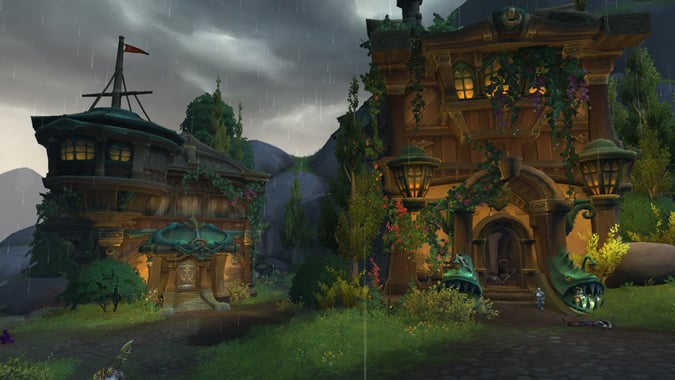 When Battle for Azeroth first launched, I was pumped. I did my whole expansion launch routine: I took a couple days off of work, had my meals and snacks prepared in advance, and put my life in order so I could zen out with some games uninterrupted for awhile. The very moment I could play, I took my Warrior to Kul Tiras and chose my first destination: Stormsong Valley. I arrived, did a few quests, and…

I didn’t want to play anymore. It was so boring. I was so bored.

Despite my enthusiasm for a new expansion, I barely played at all on its first day of release. I found myself tabbing out to do other things, or completely walking away from my keyboard mid-quest to find something more interesting to do. Eventually, it reached the point where I started considering I might simply be done with World of Warcraft. Maybe I don’t find it engaging anymore. Maybe, after all of these years, the game just isn’t fun anymore; it has nothing to offer me.

Stormsong seemed less like a zone in a new World of Warcraft expansion and more of a paint-by-numbers recap of being level 10: quilboar, harvest reapers, and killing rats down on the farm. It all culminated in an Old God plot so standard and uninspired it was comical. Really? You expected me to be shocked by that slow pan across a bunch of dudes becoming Faceless Ones as if this exact story hasn’t happened over and over again in this game? Even the Horde attack on Brennadam was tedious more than anything else.

Regardless, over the course of three days, I forced myself to play through Stormsong to completion, just so I could move on and see something else. If the next zone was just as boring, I intended to drop the game for good right there. And I’m glad I pushed on. I chose Drustvar as my next zone — and suddenly I was having fun again. Drustvar was moody, spooky, engaging! It had environments that were interesting to look at! New enemies, new story beats, cool characters! Stormsong almost made me quit the game when I was at peak hype for a new expansion, but Drustvar pulled me back in.

Even this long after launch, I hate going back to Stormsong for World Quests. Most of the objectives there seem to ask the player to repeat the most tedious parts of the zone — but maybe that’s only because the zone is mostly tedious. Even Vol’dun, the dullest of the three Zandalari zones, is more interesting than Stormsong “Westfall But Bigger” Valley. In my opinion, anyway.

What about you? Do you hate Stormsong as much as I do? Or is it somehow your favorite zone of all, and you think I’ve gone mad? Which zone is your favorite — or most hated? Let me know!

Blizzard Watch is made possible by people like you.
Please consider supporting our Patreon!
Filed Under: Drustvar, Stormsong Valley
Advertisement