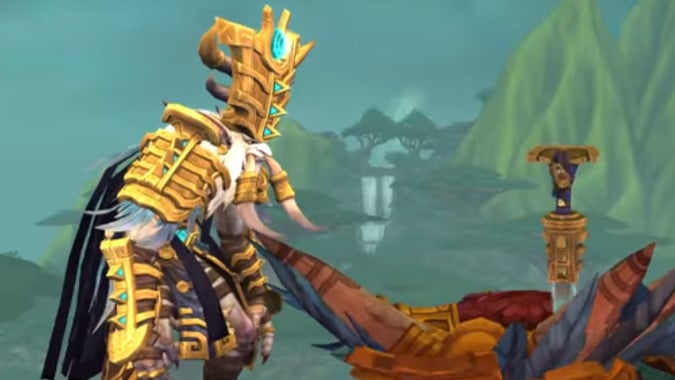 If you’ve played Horde this expansion, then you’ve gotten a real in-depth look at the Prophet Zul. But in many ways, Zul’s story in Battle for Azeroth is the culmination of a great deal that’s gone on before. And while we’ve never seen Zul up close and in person like we do on Zandalar before, his long reach has exceeded his grasp for a very, very long time now. You may not be aware of just all the ways Zul has been behind the scenes, subtly and not so subtly affecting the world.

But now, as you leveled through Zandalar, you got to see the denouement of it all — the culmination of storylines we’ve had in game since November of 2008. What’s been leading up to the events in Zandalar? A whole heck of a lot.

Please note: There are spoilers for the Horde storyline in Zandalar in this post. 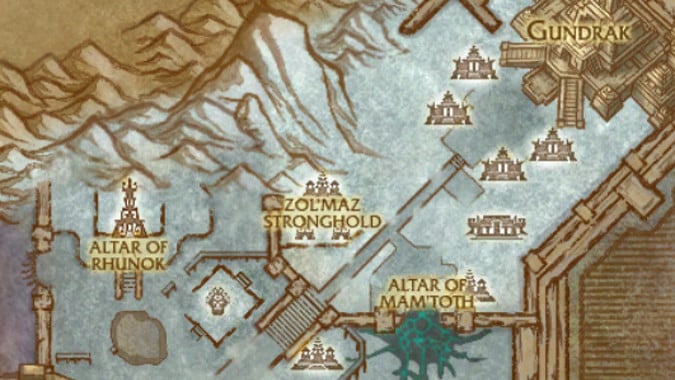 Zul’Drak and the deaths of the Loa

The Drakkari were once one of the more powerful Troll nations on Azeroth, and their terraced Zul’drak was a temple city from the seat of power at Gundrak to the powerful fortifications of Drak’Tharon Keep, where the numerous Loa of the Drakkari were worshiped and consulted. Then the Scourge came, and the Drakkari watched in horror as the southwestern portion of their territory fell — even the Loa, Tharon’ja, was corrupted by the Blight.

Desperate for a solution, the Drakkari eventually came to a horrific conclusion, and in their panic and desperation they did the unthinkable — they found a way to sacrifice their own gods and steal the power of their Loa for their own personal use. Such a horrific discovery was not without its difficulties — the Loa, Mam’toth, chose to destroy itself utterly and kill most of its followers rather than allow itself to be sacrificed. One Loa, Quetz’lun the Wind Serpent, eventually managed to reclaim her power from the former High Priest who stole it from her, torturing the Prophet eternally in an underworld of her own making. But for most of the Drakkari Loa, death came not from the Scourge but from their own terrified followers seeking any means to defend themselves from the waves of undead descending from Icecrown.

Not only did Zul’Drak ultimately fall to the Scourge — whatever short-term gains in power the Drakkari gained by sacrificing their Loa, they lost in the stability their society no longer maintained without the Loa’s worship. But it was a group of Zandalari who came to Zul’Drak to attempt to preserve what they could of Drakkari culture, led by Zul himself, that discovered the secrets of the Drakkari rituals to steal their Loa’s power. Zul learned these secrets well and taught them to some of his own disciples, such as Yazma. The fate of Rezan and Shadra is entirely due to Zul having learned these secrets in Zul’Drak before the temple city fell to the Scourge. 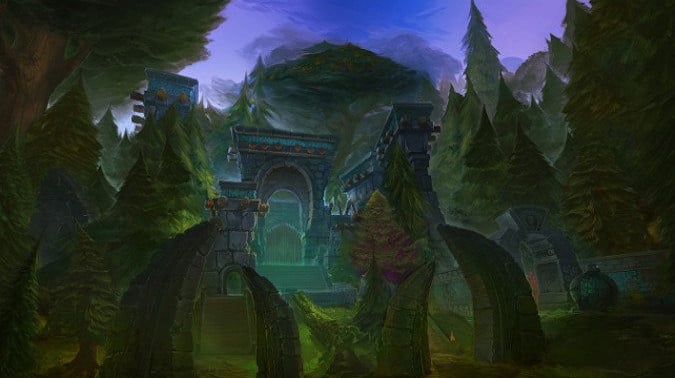 The Cataclysm and the Golden Fleet

Whether or not Zul “predicted” the Cataclysm or, as now seems likely, his Old God masters — whom he personally did not consider his “masters” — fed him the information, one thing seems clear. All of his actions were less to ensure the preservation of his people, as he had claimed, and much more to ensure his personal power.

When the Cataclysm hit and Nazmir began sinking into the swamps and mires that now dominate the landscape, Zul claimed that all of Zandalar would soon follow. But this has clearly not come to pass, and even many Zandalar have noticed that the Prophet did not correctly gauge the extent of the disaster. But all his prophesying and doomsaying got him what he wanted — leave from King Rastakhan to take a portion of the Zandalar fleet, which he used to create alliances with other Troll tribes and empires. During the time when Deathwing was rampaging across Azeroth, Zul managed to make deals with the Gurbashi and Amani and offer Zandalar aid to reclaim their lost glories.

In the end, the Darkspear Trolls under Vol’jin managed to stop this plot with the help of Horde and, surprisingly, Alliance adventurers who prevented Zul’Gurub and Zul’Aman from becoming bastions of Troll unity. But while they were thus occupied, Zul managed an even more impressive feat. With the Golden Fleet at his disposal and the loss of Pandaria’s protective mists as a result of the Cataclysm, Zul reached out to one of his people’s oldest group of allies. 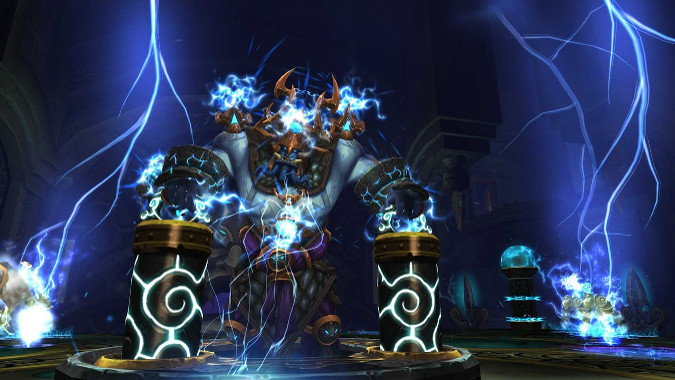 Zul and the Mogu

It was Zul who sent the Zandalari to Pandaria, entirely on his own. He didn’t need to ask for Rastakhan’s permission because he’d already managed to convince the King to hand him control of a sizable portion of the fleet to shut him up about the Cataclysm and the sinking of the island. Zul used these forces and his own servants — such as Prophet Khar’zul and Gara’jal the Spiritbinder — to help find the tomb of the Thunder King, Lei Shen, and use the ancient rites to raise him from the dead.

Zul didn’t do this out of the great love he bore the Mogu any more than Lei Shen accepted their presence and aid because of his deep affection for the Zandalari. No, just as in his presence in Zul’Drak, Zul was learning. The rites used to return Lei Shen from death were of Mogu origin, but now, Zul knew them through his servants. While Khar’zul seemed to fervently believe that the Cataclysm had destroyed Zandalar, Zul knew differently, and everything he did — every order he gave the Zandalari forces in Pandaria, every alliance he maintained with the Mogu, every raid and strike he ordered on Pandaria as a whole — was aimed purely at gaining the knowledge of how to return an ancient monarch to life. The alliance with the arrogant Lei Shen was worth the price Zul paid in followers for that one piece of information. 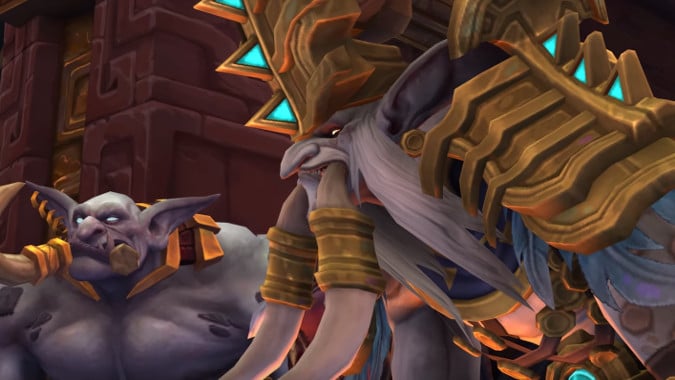 By the time the Horde gets to Zandalar, Zul’s schemes have been temporarily derailed by his unforeseen — or, “unforeseen” — capture by the Alliance and his temporary confinement in the Stockades. We see Zul’s use of his Sight during the escape from Stormwind, as he deliberately sets a fire that becomes a raging inferno at just the right moment to distract Jaina Proudmoore and allow him and those with him to escape — which makes the idea that he was caught unawares seem unlikely.

But as we watch his scheme unfold, we have to wonder why Zul allowed himself to be taken. Was it to bring the Horde to Zandalar and distract Rastakhan? We learn from Zul’s confrontation with his former student, Vol’jamba, that Zul believes not just in planning for the futures you can see coming, but for the ones you don’t see. So perhaps it was all a dodge.

But one thing is clear — Zul’s plans culminated in an ambitious plan to have Yazma, the High Priest of Shadra and King Rastakhan’s spymaster, use the stolen Drakkari rites to consume the power of Shadra. When this succeeded, they seized control of Atal’Dazar in order to use the Mogu magics to raise long dead first King Dazar himself to replace Rastakhan as King of the Zandalari. However, that part of the plan failed, forcing Zul to fall back on another scheme.

Next time we’ll talk more about what Zul was doing and why, how it all came to a head at the Great Seal, and who G’huun is and where it comes from.