The Hearthstone team never stops working, and while they haven’t announced the next expansion, they have shared some interesting updates that are coming to the game soon. But while it’s common for the team to talk about the state of the meta — they’re pretty happy with it — and the new player experience — they’re adding more ranks to ease newbies into competitive play — this update had some real surprises. 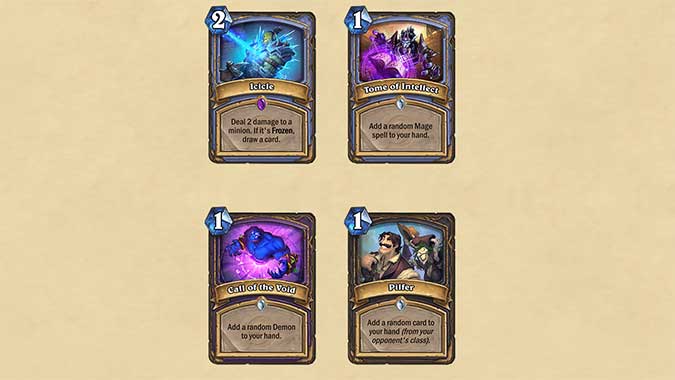 Can a new card still be a Classic card? Apparently so

Every so often, Classic cards get rotated out of Standard play and placed into the Hall of Fame, like Conceal, Ice Lance, Power Overwhelming, and Ice Block. But this is the first time that new cards are coming into Classic to help replace and replenish the pool of available cards. Starting in early November (just in time for BlizzCon), you’ll be able get these four new cards in packs or through crafting:

I don’t really think any of them are must-craft cards. Icicle is another minion damage spell option for Mages. The Frozen addition is okay, but most Mage decks don’t often have a lot of opportunities to freeze a minion. The other three cards are basically random card generators. They can get you a random Mage spell, a random Demon, or a random card from your opponent’s class, but these aren’t the most dependable because they aren’t Discover effects.

Still, these cards are okay for a Classic set, especially for newcomers to the game. Next thing that needs to happen is a new pool of Classic Legendaries to add!

Tournament Mode is dead (for now)

As for Tournament Mode, which would make it easier to run in-in game tournaments, it’s been shelved. The reasoning? The Tournament Mode Blizzard had developed “catered to a very specific audience of players” and so didn’t integrate well with the broader Hearthstone experience. I’m disappointed by that because it was a feature I was greatly looking forward to, and I’m really curious as to what iterations they tried that led them to the conclusion that the mode didn’t work for the game as a whole.

Last year, I wrote a post comparing different tournament modes from other games and how it might look like in Hearthstone. I still believe that some sort of competitive 1v1 functionality is needed at least to help streamline the deck selection and ban process. Losing a game because you accidentally mis-queued the wrong deck or had one card different from the submitted list is just disappointing. No one really wants to win a match like that through human error.

Blizzard is still thinking about how a Tournament Mode would work, but it sounds like their existing work has been scrapped — and there’s no ETA for a replacement.

Blizzard is happy with the Standard and Wild meta

What surprised me about this update is that Blizzard isn’t planning any changes to Wild. In my limited experience, Wild Druid decks seem to be the most rampant — but my sample size is nothing compared to the data that Blizzard has at their disposal. Wild is all over the place since there are so many powerful cards and interactions from all the sets. Where Wild is concerned, it seems like the developers have adopted the DotA 2 mindset where if everything is overpowered then nothing is overpowered.

We’re starting to hit a point where maybe another tier of expansions can be consolidated into its own format. We have Standard, we have Wild, and maybe the time has come for a tier called Legacy. For example, I would like a format which takes the last 7 expansions worth of cards plus Classic. Hopefully, it’s an idea worth exploring in the future. Having a new format where players can still take advantage of their older cards but not have to be subject to insane power might be beneficial.

This is a to digest, and you may want to read Blizzard’s original post yourself for all the details. The new cards coming in early November, but there’s no word on when the other changes will arrive.

Blizzard Watch is made possible by people like you.
Please consider supporting our Patreon!
Filed Under: Classic, Hearthstone, Hearthstone Development, Hearthstone In The Works, Standard, Tournament Mode, Wild
Advertisement