Hey, kids, remember when we talked about all the new Druid forms for Zandalari and Kul Tiran Druids? It was a pretty fun roundup to make, mostly because those forms are utterly fantastic. But there were two pretty obvious gaps in them — the Kul Tiran Druids didn’t seem to have a caster form of any kind, and the Zandalari aquatic form was equally absent.

Well, with patch 8.1 now on the PTR and the folks at Wowhead doing their usual datamining magic, we finally know what those forms are going to look like. And for any Highmountain Druids out there who feel they’re missing out on the fun, patch 8.1 looks like it will now give you your typical antlers in caster form as well.

But this is about Kul Tiran and Zandalari Druid forms. Let’s take a look at what’s in store for them in 8.1. 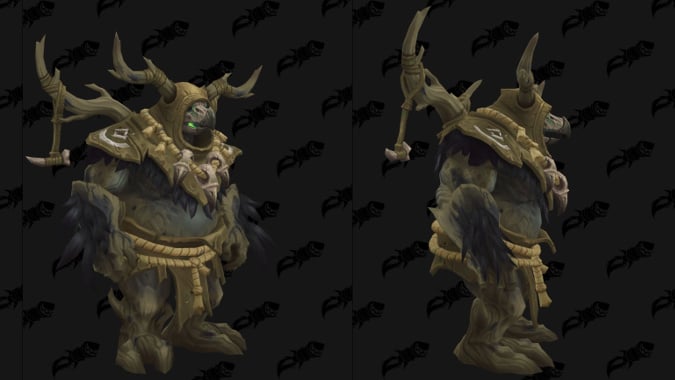 What is that thing?

The first time I saw this form I said, “It looks like someone who’s never even heard of a Moonkin got one described to them and they decided to make one out of a patch of dead trees and some taxidermy scraps.”

I stand by that description.

That head looks like someone found a turtle who didn’t make it to the water and mounted some antlers on it. It’s like an approximation of what you might think a Moonkin was if your day-to-day life was suffused in utter nightmares. In other words, it fits the Kul Tiras Wickerpunk Druid aesthetic to a T.

The best part is that they slapped a hood on it like that helps at all. “Oh, don’t be scared, children. That wooden corpse puppet is our friend! It’s come to restore the balance of nature, which of course includes the manifest truth that death comes for us all in time, even your beloved pet turtle!” I really have no words for how fast I’m going to race change my Worgen into a Kul Tiran Druid as soon as it becomes possible. This is just great. It’s baffling and macabre and everything about it makes me want to go out on a fall evening and think about my eventual death. They made a caster form out of mortality itself. 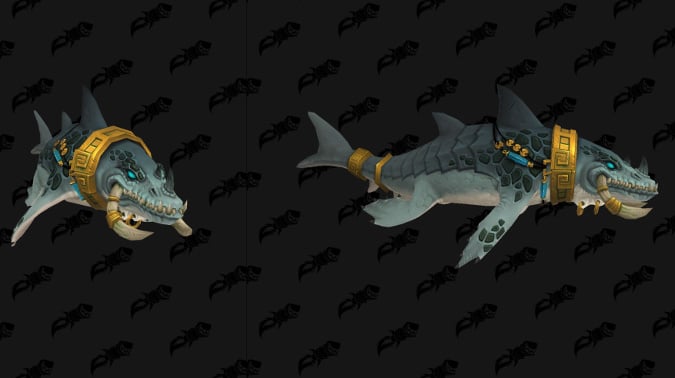 A very Ichthyosaurian aquatic form for the Zandalari

At first glance, this form appears shark-like — but the particular tooth arrangement reminds me of ancient, extinct marine reptiles like Cymbospondylus or other Ichthyosaurs. The back fins are much more like marine reptiles than sharks. They also remind me of the Machimosaurs, ancient sea crocodiles that evolved a more aquatic form; however, that tail is pure Neptunidraco. Like many marine reptiles, there’s a certain copying of shark elements, which isn’t surprising, as the shark form is a pretty solid one for aquatic predators. I might have liked a big Liopleurodon form, but this definitely works.

Still, I feel bad for this terrifying aquatic hunter to be in the same post as that wickerskull monstrosity up there. I’m sorry you got upstaged, bling-wearing sea reptile. It’s hard to follow that.