The Queue: Modern beats Retro… but at what cost? 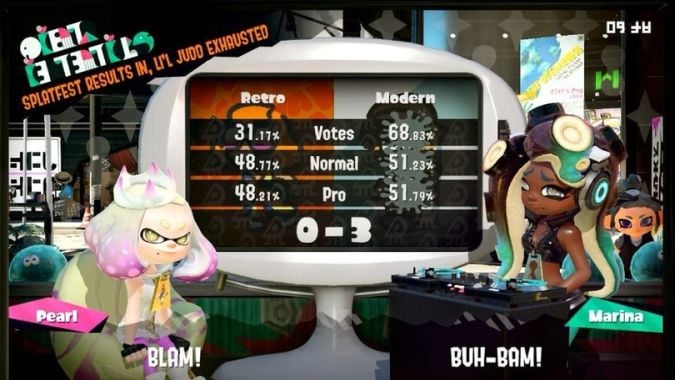 This month’s Splatfest was a bit of a different one. Not only did it use a revamped system to determine the winner (Clout instead of matches won), it also resulted in the first win for Marina in a long time. Unfortunately, it also happened to be the Splatfest where I’ve been the most genuinely angry at the game.

When 11:00 p.m. rolled around, I had an hour left to get in just a couple wins. I figured I’d be done in 20-30 minutes tops. So, naturally, I wound up going on a 7-game losing streak where the matchmaking consistently placed me against teams that were rated higher. I don’t know why, but it frustrated me to no end. I finally hit Queen (the max Splatfest rank) at 11:57 p.m.. I was not a happy camper.

Anyhow, that’s literally all for any Nintendo-related anything that we’ll be discussing today. Let’s Queue.

QfMitch: Are you tempted to make an inky-eyed night warrior?

I really love the new Night Warrior cosmetic option, and I will probably end up switching my Rogue’s look to that style… however, I do hope they end up with a little more customization options before they go live. The way the faces look right now seems… off. Mouths and eye direction don’t quite match the darkness.

MISTAH JAY HAS PERHAPS THE MOST DIFFICULT 2BE YET:

This might be controversial, but I’m gonna have to give this one to Nat Pagle.

DILLENE, THIS MAY BE EVEN MORE CONTROVERSIAL:

Apropos of the opening: if Azeroth had something like Yelp, which stores/taverns/vendors would receive the best reviews, and who would get the worst?

ETA: because I’m thinking Cro Threadstrong would have some negative reviews

Griftah would have reviews that ranged from below 0 to “Changed my life! I wish I could give him more than 5 stars!” (Yelp uses Stars, right?…) There would be an ironic review of one of the Darnassus inns from a couple years ago that said, “This place is lit af!!!” One review would say, “This place isn’t open yet, but I already know it’s gonna be awesome! I’m so excited!” — that one would be for Karabor in AU Draenor.

Best/worst, though? I’ll leave that to you guys to decide. Meanwhile, I’m gonna go pitch “WoW locations according to Yelp reviews” to Adam…

Does anyone know why the pieces I am getting in the Warfront aren’t being added to the Warfront set but are being added to the regular Appearance tab? I do have some in the Set tab. I think those may have come the first week Warfront was out but the Alliance didn’t hold Stromgarde. I am wondering if those for the Set tab must be obtained from killing Rares and doing the quests rather than simply as a reward for finishing the Warfront as we are doing this week because we are holding Stromgarde as Alliance.

I made a big ol’ rant about this exact topic on Twitter yesterday. There appears to be at least one set from Warfronts that’s not in the appearance tab. When you look for the Warfront appearances, there are three of them. The one that my Rogue has — but is not in the appearance tab — uses the design of the first set but the coloration of the second set. And it also uses the name of the second set.

It’s stupid and annoying and makes no sense.

q4tq, As a servant of the old gods, do you have a favorite?

I do! Yogg is the one I worship. Part of that is because I have really great memories of that fight and of Ulduar/Wrath in general. Part of it is because I like how the game portrays his effect on those nearby (see: Whispering Gulch).

VALENCEMAGI HAS A QUESTION THAT WE CAN ALL CONTRIBUTE TO:

Q4tQ: A group of wayward Tell Tale Games devs find themselves in Blizzard; what’s the game/IP/Characters you want them to get tasked to make a game of?

Believe it or not, I’ve never played a Telltale game. And, based on how the company is treating its former employees, I probably won’t. But I get the general idea of how those games worked. So if they could work on a Blizzard property?

I’d want them to work on ancillary characters that we occasionally cross paths with. People like Tehd and Marius, except ones who aren’t already portrayed as quite so comical. Give us an inside look at the smaller folk whose lives are affected by the things we do but have no power over it… or maybe they do. Maybe they do stuff to help us that we don’t even notice.

I am disappointed with the younglings’ lack of tradition: all this focus on RNG and traits and nobody upholds the old ways – petulantly agitating for Flying. What is your guess on when is 8.1 and when will the final Pathfinder be out?

My original guess for 8.1 was October 9. That doesn’t seem likely, but hey, it would be cool if I had called it back when BFA came out. But I don’t think we’ll get flying until we are closer to not having content to do on Zandalar or Kul Tiras. Wherever we go whenever all this definitely-not-Old-God stuff happens and where we inevitably will be unable to fly — when that comes out (or just before it), I think we’ll get flying.

Concerning the Vale of Eternal Blossoms QftQ: Why, with the wonderful phasing/slicing/dicing technology, do we never see any area we have “fixed”
by removing threats &c. as fixed/pacified/&c.? Shouldn’t there be a Time Lord or Bronze Dragon or someone with a little black box and a switch to whom we can say, “Yeah, been here, done this, don’t ever want to do it again, go ahead and remove the mobs/broken things/cats in burning buildings/whatever?”

I don’t have a good answer for this. Blizzard has the technology to make it happen. The original zone is almost assuredly in the game still (pretty sure it’s part of the background for Gate of the Setting Sun). It’s frustrating they haven’t done this yet. Sorry I don’t have a better answer for you.

And that’s today’s Queue! Go debate stuff and things in the comments.

Blizzard Watch is made possible by people like you.
Please consider supporting our Patreon!
Filed Under: Queue, Splatfest
Advertisement