Ever since the surprising turn of events that led Vol’jin to name Sylvanas Warchief, many have been wondering what the heck the Loa who whispered her name was thinking. Was the Loa looking into the future to a point when Sylvanas’ place as leader of the Horde would be necessary to save Azeroth? Was there a larger purpose behind the Loa’s recommendation that we mortals didn’t fully grasp? It seems safe to say that nothing Sylvanas has done since becoming Warchief has really led players to believe her promotion was for the greater good.

Patch 8.1 is going to address all of the above in more detail than we’ve ever seen up to this point. However, that’s about all I can say without diving into spoilers. So, if you’d like to continue reading, please note that this post will contain massive spoilers for patch 8.1 and the quest chain that seeks to answer all these questions. Read on at your own risk.

From the datamined text, it looks like Talanji summons Vol’jin to have a bit of a chat. It’s not entirely clear if she’s doing so on behalf of Baine — who first broaches the topic of Sylvanas’ appointment — or if she has her own reasons. Regardless, once Vol’jin’s spirit is summoned and a few pleasantries are exchanged, Baine gets to the point:

Sylvanas led us to victory in the war against the Legion.

But since then… she has done much to strain the honor that binds the Horde together.

I must know… when the voice spoke to you, bidding you to name her warchief… what spirit was it?

Unfortunately, Vol’jin doesn’t have a clear memory. He says it’s being denied to him by shadows — shadows which, to my best interpretation, then decide to interrupt your chat with an attack. After you dispense of them, Vol’jin reveals that there may be quite a bit more going on than we first thought. As it turns out, Vol’jin hasn’t heard from the Loa in a long time — when he died and went to the Other Side, there was a presence moving in the shadows. It was a powerful presence that led him somewhere… but it clouded his memory so he wouldn’t remember where.

And that’s when Vol’jin tells us up front: “Da truth dat it might not be da loa who wanted Sylvanas to be warchief, but somethin’ far more powerful.” Thus begins our great whodunnit to figure out who it was who actually spoke to Vol’jin. 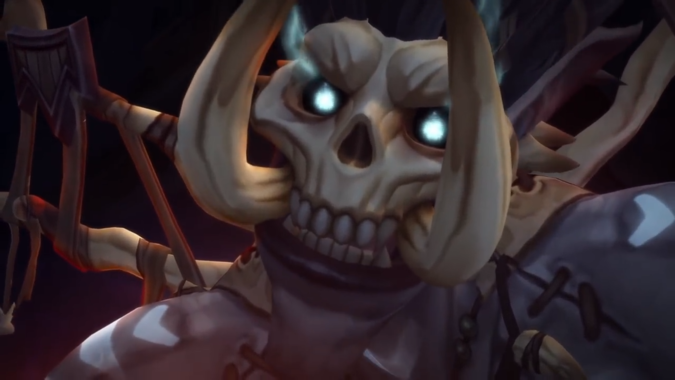 Bwonsamdi being Vol’jin’s Loa, he’s our prime suspect and the first on our list of people to visit. Talanji gets straight to the point and accuses Bwonsamdi of turning a deaf ear to Vol’jin’s pleas. What’s interesting is that Bwonsamdi responds with, “What? Nonono. Ya be mistaken, Talanji.”

Maybe he simply means he hasn’t heard Vol’jin… or maybe he means Vol’jin is not his “servant,” which Talanji had just referred to him as. Keep this in mind later on — we’ll get back to it. For now, we don’t find out what exactly Bwonsamdi means, but we do figure out that he wasn’t the one who spoke to Vol’jin, and he certainly wasn’t the one who recommended Sylvanas be appointed Warchief:

Why would me want da Banshee Queen in charge? Nononono. Sure, I be all for war and death, but dat Sylvanas… she be tippin’ da scales too far.

Balance be important! Besides, dat one got a nasty habit of keepin’ what she kills. No, ya warchief be no friend to ol’ Bwonsamdi.

Welp. Our most obvious candidate for whodunnit is a dud — a who-dud-it, if you will. So we have to move onto someone else… someone with ties to death and Sylvanas. Hmm… who fits that description?…

It’s not entirely clear whose totally-not-bad idea it is to pop in and have a chat with the Lich King, but it seems that Bwonsamdi at least has a hand in bringing us to the Frozen Throne via Death Gate. The Lich King, as it turns out, is completely amenable and explains everything to us. He clears up the entire mystery and discusses why Sylvanas’ position as Warchief will ultimately be for the good of Azeroth and how she’ll-

While the Lich King does tell us that he, too, is not a fan of Sylvanas, telling us “The Banshee Queen’s schemes threaten the balance. I had no hand in them.” But he has another tidbit of information that is… intriguing, to say the least: “Vol’jin… your soul has walked on the Other Side and returned. You have been altered… more than you know.”

This ties back into both Bwonsamdi’s initial worry about the disappearance of Vol’jin’s soul in the 8.0 questline and his words above that Talanji is mistaken. All signs are pointing to Vol’jin having been turned into a Loa — or if not a Loa, something equally (or even more) powerful. But, y’know, the Lich King being the Lich King, this is about all we get before he tells us we can leave right now or we can stay a few minutes longer and then die. We choose the former and make a break for Bwonsamdi’s Death Gate.

Two dead ends so far. Not a whole lot of people left to question. Is there anyone else — anyone at all — that has ties to Sylvanas and also the power to control the fates of the dead?…

Eyir isn’t super happy about a Priestess of Bwonsamdi showing up in the Halls of Valor. Thankfully, Vol’jin and his champion (you) are allowed to approach. Odd, given Vol’jin is — or, more likely, was — a servant of Bwonsamdi, too. Vol’jin and Eyir’s conversation is the most important one so far. Frankly, it’s something you need to read for yourself:

Queen of da Val’kyr. My spirit was sent to da Other Side, den returned. Was dis your doing?

Shadow hunter, you are no longer a mere spirit. What you have become is something beyond my power to forge.

Who be havin’ such power? Could it be da same one who bid me ta name Sylvanas warchief?

You have been touched by the hand of valor. Such a noble force does not scheme for mortal thrones.

So whoever whispered to me’s not da same as who sent me back?

You have been granted all the knowledge I am willing to share. Leave now, and never return.

So, in the end, we’re left with more questions than we came in with. But we only have those questions because we’ve been given snippets of very important information. Vol’jin is something more than a mere spirit. The one who whispered to him on Death’s door is very likely not the same as the one who is responsible for that ascension. And neither of those beings is Bwonsamdi, the Lich King, or Eyir.

Where does that leave us and our little mystery? Personally, I think Helya is the one responsible for whispering to Vol’jin. It would help explain what deal it was Sylvanas made with her back in Stormheim — sure, she was Warchief already at that point, but maybe Helya saw that coming and used it as a bargaining point. It would also explain how someone could whisper to Vol’jin when he was so close to dying. As for the person who changed Vol’jin? I’m loathe to say it, but being “touched by the hand of valor” sounds like it falls into Odyn’s territory. And if Helya was the one who whispered to him, wouldn’t the best way to disrupt those plans be to empower the one to whom she whispered?

We’ll find out in due time, I suppose. For now, what do you all think of the situation? Who whispered to Vol’jin, who changed him, and why did it all happen in the first place?

Blizzard Watch is made possible by people like you.
Please consider supporting our Patreon!
Filed Under: Battle For Azeroth, BFA, Bwonsamdi, Loa, Patch 8.1, Sylvanas, Warchief
Advertisement