He was her weapon: Echthroi, the Enemy 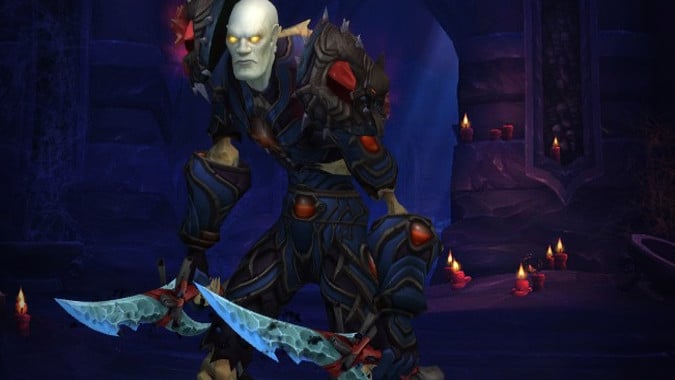 This character profile has been written for Echthroi, one of our supporters. If you enjoy it, you can check out the other profiles we’ve written, too!

It wasn’t his fault. It was just what he was.

He slid the blades out from the dead Elf and melted back into shadow. His need to breathe was minimal — he needed air to speak and to keep his chest from caving in from air or water pressure — and so he could glide almost silently through the darkness pooling on the ground. Above him the moon cast its light down on him and it felt hateful, but in a way he was glad for it — without the brightness the shadows wouldn’t be as dark.

He waited for the two Night Elves to pass beneath him, not looking up — they knew these woods, and if he’d done anything wrong they would have sensed him. He forced himself not to drop down and try for one, because he knew what would happen — he’d probably kill whichever he picked, but the other would have a free shot at him while he was doing so. He couldn’t afford to be wounded.

It would slow him down.

Behind him, Ashenvale burned. He felt nothing about this. Ashenvale was meaningless to him — a forest the Orcs and Elves had fought over for years. He didn’t care about the Elves. If he was being honest, he’d admit he didn’t care much about the Orcs either, or the Horde. He wasn’t a patriot or a loyal soldier.

“Do you hear anything?” The foremost of the Elves spoke, her indigo skin nearly melting into the darkness, a giant cat at her side. She was carrying a wicked thing, like a spear with a broad blade at either end. It was dripping, and even in the penumbra where the light of the moon caught on the trees and left blackness scraping across the forest floor he could tell it was Forsaken ichor and not blood.

“Yes. But not what I wanted.” The other, a taller and thinner woman, lacked the muscle of the first one and made up for it in a keenness of bearing that might have alarmed him if he wasn’t already dead. He didn’t have to force patience into himself. Since he’d died patience was second nature, there no longer being a reason to hurry. He would exist until the Dark Lady no longer had a use for him, not a second longer, not a second less.

He felt himself fortunate as he hung from that branch, too thin to support his weight when he’d been alive. Fatigue would have set in as they pathed around, never leaving each other alone long enough for him to set up an attack. He would have moved and set the limb moving, or knocked a leaf down to be seen. Instead, he hung in the tree as rigid and motionless as a maquette, and did not remember days now long stolen from him in his uncle’s studio. He did not remember working in clay, creating small figures to be fired in the kiln and sold as amusements on the streets of Lordaeron City. He did not have to remember that, because it did not suit her purpose for him.

She needed a weapon, not a failed sculptor whose soft, gentle hands had long since become gnarled and twisted. The way he’d once held a sharp cutter as he flicked away clay to make a rabbit or deer was now as alien to him as the smiles that he’d loved to see on the children’s faces every festival day. Those children were gone. Those streets, those festivals were gone. Lordaeron was gone, and the city his people have carved for themselves lay buried in its corpse.

The moon drifted across the sky while they kept searching and he kept waiting. The taller one moved her hand, gestured to the left and the two of them headed away at a clip. He waited still, hung from the tree on fingers that never grew tired or stiff. The sky was beginning to glow like coals catching fire around the horizon when he allowed himself to drop from the tree, branch to branch to avoid crashing to the sward below. Feet more bone than sinew wrapped in leather that always seemed to rot away too quickly touched down with a soft rustle, so quiet it sounded like wind.

It wasn’t wind. Neither was the barbed arrow that took him in the chest, slamming into his breastbone and knocking him back with the force of the shot. He was glad it did, as the Elf with the barbed double-bladed spear melted out of the dark and would have impaled him were he not falling backwards into a roll, coming up with both daggers just fast enough to preserve what little of his face was left. He could not hear the cat, did not see it, and thus assumed it was about to drop down on him.

He dropped onto his back and bridged, driving a kick into the woman’s face that surprised more than hurt her and used that moment to push away as the large black cat with the white stripes caught his leg with claws larger than his thumbs. He felt the pain, which always surprised him — food no longer had taste, he couldn’t enjoy a crisp autumn day or the smell of woodsmoke, music always seemed to lack any immediacy — but shoot him in the chest or slash him with claws and that he felt as fresh as he had before the day Prince Arthas came home. He managed to wrench himself away before the cat managed to bury its teeth in his flank, slashing out with the daggers to force it to move or take the hit.

More arrows, but now he was aware of her and danced out of the way, keeping the angry one between them. Her spear strikes were fueled by her rage, but that left her sloppy — she swung too hard and needed to correct before she could swing again. No feints or thrusts, every blow would have cut him in half if she could just connect with him. He danced away, looking for an opening, but could see that it wouldn’t come. If she left herself open enough for him to drive the blades into the few gaps in her armor, he’d take an arrow for the effort.

Worse, the cat kept flanking, keeping itself to his left.

He waited until one with the spear screamed something in their language — he didn’t speak it, and she’d apparently abandoned common now that they weren’t trying to lure him out — and did a wicked overhand strike that smashed through the tree he’d been standing in front of, almost bent over double. Her back was exposed but he didn’t take the bait, instead moving away from the obvious target and avoiding an arrow that would have taken his left eye. That was his favorite eye. It was the one they’d gotten him to replace after the first one to fall out.

His talented, if bony, fingers danced to his belt and threw a small grey globe, shattering it on the spear-fighter’s armor. Black oily smoke filled the air around the three of them. Several arrows flew at where he’d been but they were a formality.

Unseen, he headed north. The real fighting was closer to the World Tree. That was where she needed him most, and it was his purpose. He was as much her weapon as the daggers on his belt.