Does your guild have any special traditions for Winter Veil? 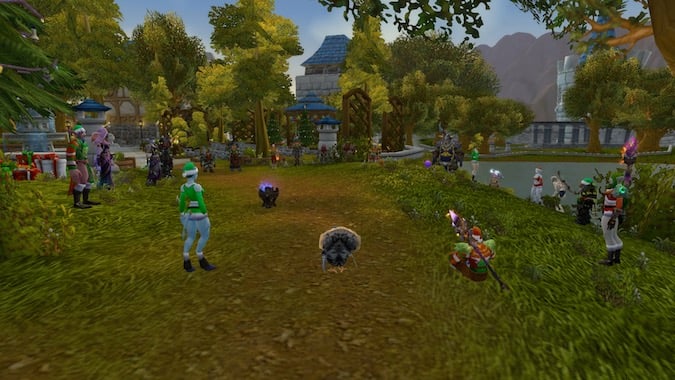 Winter Veil starts on Sunday, when Greatfather Winter will take up residence in Ironforge and Orgrimmar. Cities across Azeroth (and beyond) will be festively decorated. Come Sunday, we should know what we can anticipate under the tree on December 25th. Real people — you know, the ones who are actually pushing buttons on the other side of the screen — will be shopping and wrapping and shipping. As the song says,

There’ll be parties for hosting

And caroling out in the snow

…or, in the case of some Azerthonian cities, out in whatever weather happens to be around them. Just a note: If you’re going to work on A-Caroling We Will Go, use a character who has not done the Darkshore or Undercity quest line or go find Zidormi and change the world back to carol at Darnassus or Undercity. Of course, if the achievement gets changed for this Winter Veil, this advice is moot.

My guild is preparing for our annual holiday party. Every year — and this will be our 11th consecutive — we meet for a gift exchange. On 10 years out of the past 11, we’ve met under the tree in the Explorer’s Hall in Ironforge (unless the tree isn’t there to stand under, in which case we just stand in a circle), but several years ago, we went to Stormwind for a change of place. The guild’s anniversary is this coming weekend and I schedule the party as close to the anniversary date as I can.

To come, you must bring a wrapped gift. It can be anything, but it must be wrapped. This rules out stackable items. You can’t give potions, materials, or funny gray items like Pocket Lint, because they stack and — right now — you can’t wrap item stacks. We had an ongoing discussion about how funny it would be if everyone gave everyone else a wrapped piece of pocket lint. Alas, that cannot happen.

Wrapping paper can be found on General Goods vendors in capital cities. This is white paper with either a red or blue ribbon, but the festive wrapping paper is only available when the Smokywood Pastures Goblins appear in cities with their cart. If you’ve never purchased this, it comes in three colors:  red, blue, and purple. The blue and purple icons are not representative of what the final wrapped gift looks like.

When we first started doing this, gear was the preferred gift. Sometimes, you got something silly — like a fish — but it was usually something interesting. When battle pets were introduced, they became the preferred gift to exchange. Now, with transmog, you can find someone busily crafting something unusual for gifting. We also have the running Sinister Squashling joke. I have my gift all wrapped, but I’m also seriously considering giving someone one of those fish I fished up for that one Fishing achievement — The Limnologist. Some of these were hilarious and I still have them in my bank. They can be wrapped because they don’t stack. 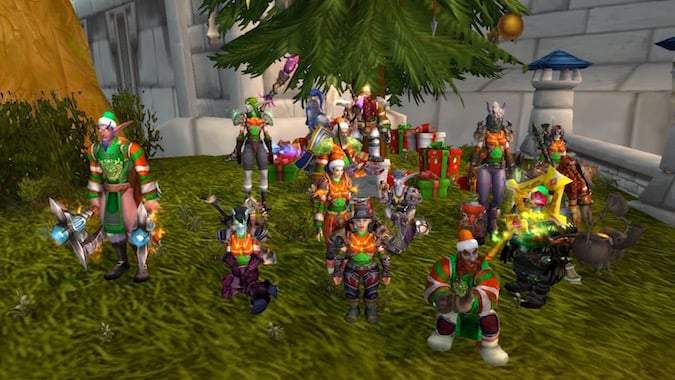 So my questions to you this morning are:  Do you do a guild in-game gift exchange? What kinds of things get exchanged? Do you celebrate with your guild in some other fashion? Are you going a step further and sending guild members actual holiday cards through the post? We don’t require people to show up in holiday outfits, but the gaudy sweaters make for an eye-watering screenshot at the end of the event.