The Queue: Your reputation precedes you 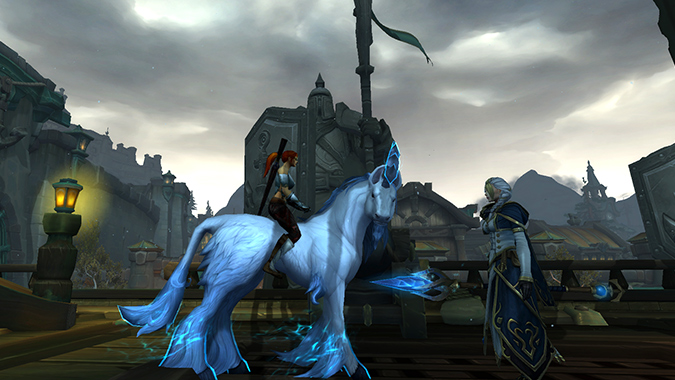 Nothing quite like jumping into a new patch and nabbing an achievement — especially when it comes with a very pretty horse as a reward for years and years of filling reputation bars. None of the NPCs seem to be terribly impressed with him, but considering just how many absolutely bonkers things people choose to ride around on, I’m not exactly surprised. I mean, once a humble fruit vendor’s seen someone trot by on a four-footed pile of screaming Draenei heads I expect it’s all downhill from there, probably.

Let’s get to your questions!

Is doing the war campaign enough to get from revered to exalted with honorbound?

If you’re already Revered going into the War Campaign, then…possibly? My alt wasn’t Revered yet when I started the War Campaign, and now I’m currently Revered, but grinding out rep between sections. I didn’t actually start the War Campaign until I hit 120 though, so that might have had something to do with it. The War Campaign does offer a lot more reputation than it used to, I just haven’t been as focused on it with the Horde alt until recently — I imagine if I’d gone in sitting at Revered already, I’d be at or really close to Exalted by now.

Hasn’t assassination always been daggers only? Or it has been since Mutilate has been in game? (I don’t follow rogue enough to know for sure). I know that subtlety used to be able to use anything for the OH but generally preferred daggers in the main hand while combat was preferring a non-dagger main hand and anything off hand.

Technically it has been since Burning Crusade, anyway — Mutilate was first introduced at that point, and required having daggers in both hands. The ability has always required daggers, and since it’s pretty much one of the core pieces of Assassination’s rotation, we’re stuck with them. So it’s not exactly “required” to be daggers only, it’s more like “Hey, if you would like to actually perform your rotation, you have to have daggers equipped.” Six of one, half dozen of the other, really.

Honestly, speaking as an Assassination Rogue since…what, just after Ulduar’s release I think was when I switched over, it’s not that it’s bad. I like playing Assassination, I like the rotation, I like watching poisons and bleeds tick away at my enemies. I’m just…bored with the same weapons every expansion.  Add to that Battle for Azeroth’s annoying tendency to hand me weapons for specs I don’t actually play, and you’ve got a recipe for frustration.

To be clear — I’ve been playing a class that has been using nothing but daggers since Burning Crusade, and I’m frankly getting a little bored with the fact that I don’t really have visually interesting items to look forward to. Transmog lets me change the appearance of things, but the only choice I have for my dagger is to make it…another dagger. Getting an axe or a sword or a mace as a drop is just another thoroughly useless item to add to the pile. I can’t use it for gameplay, I can’t use it for transmog, I suppose I can scrap it but that doesn’t really address the issue I’m having where decent daggers simply aren’t dropping for me.

Loosening transmog restrictions to allow me to make my daggers look like something else might help a little. Actually making decent daggers readily available over the course of regular gameplay would help a lot more. I get that Blizzard would like to give us weapons to use for other specs, in the event we choose to change specs. What I don’t appreciate is how it seems like nearly every weapon drop I see is for a spec I don’t play.

If we’re obviously playing a particular spec, I feel like drops and World Quest rewards should be weighted in a way where you’re getting, you know, 80% weapons relevant to what you’re playing, 20% a sprinkling of weapons for other specializations. As it stands, I’m getting about 90% other specs, and a scant 10% or so of weapons actually applicable to the spec I’ve chosen to play. It feels terrible.

Maybe it’s just poor luck on my part, but either way gosh I’ve ranted about this more than enough, haven’t I? Let’s move on.

So I decided to try to get my Hyjal Wisp. That must have been a fun raid back in the day. How did it work with the mobs everywhere in the Horde villiage. Did the raid split up into dungeon size groups?

It depended on the raid group, I think — mine usually had a group or two designated for the back with the ranged mobs up in the sky, and everyone else piled in the front to kill the melee packs as quickly as possible. If there were still ranged in the back, we’d head out to help, otherwise we’d stay put.

It was a fun raid, but…well, it had its tedious moments. The boss fights were interesting, but the endless waves of trash weren’t necessarily the most engaging thing in the world. Archimonde kind of made it all worth it, though — he was endlessly frustrating, but I still remember the first time we killed him. And he didn’t really get any easier on farm, because the fight was kind of dependent on everyone remembering to use their Tears of the Goddess to keep from splatting.

It just now occurred to me that Tears of the Goddess are technically Tears of Elune. Were…were we technically using a Pillar of Creation as a parachute all the way back in Burning Crusade? What an odd thought.

So question, can you chain run dungeons for reputation?

Technically, yes. You can reset Normal mode dungeons and re-run them multiple times over. Heroics can be reset as long as you don’t kill any bosses — so if you’re farming, farm the trash until it’s dead, then reset and kill the trash again, don’t kill a boss. Heroics typically give more reputation, so you might want to go that route. Keep in mind you can only reset so many times before it’ll lock you out — you’re limited to 10 instances per hour. Best way to farm is to find a dungeon with a lot of trash, so you don’t clear too quickly, but still get a steady stream of rep. Good luck!

Anyone try soloing Legion LFR yet?

I haven’t tried LFR, but I’ve soloed a few raids on Normal mode before the patch. It wasn’t too terribly difficult, although there are bosses that aren’t that easy to solo. Ursoc pulled the brakes on my soloing Emerald Nightmare, I couldn’t kill him before he killed me. I made it pretty far into Nighthold before stopping for the night — haven’t gone back yet. I imagine LFR would be a little easier, maybe I’ll try stomping Ursoc in there and see if it’s possible!

I can’t find the 8.1 Saurfang quest chain. Is it part of the war campaign?