Even Hearthstone players without much of a card collection will be interested in Rumble Run, the single-player adventure for Rastakhan’s Rumble. All of the cards you need are provided to you, though there’s plenty of RNG involved in getting the right ones at the right time. And because of that RNG, the deciding factor on winning a run is usually the amount of patience you have.

While Hearthstone’s single-player formula is familiar, this iteration ratchets the difficulty to a higher level than previous content.  Think of Dungeon Runs as Normal, Monster Hunts as Heroic, and this Rumble Run as Mythic. But like any dungeon, knowing what you’re getting into can help you emerge victorious. This is what you need to know to win.

What you can expect from a Rumble Run

If you’ve played Dungeon Run or Monster Hunt, you’ve got the basics of how the Rumble Run will work. You start by picking your hero. Like the Dungeon Run, you can play any of the nine classes, but instead of picking a specific hero, you choose from one of three random Shrines (which have colored borders to match the class they represent). It appears — at least from my runs — that one of the Shrines will be the one you most recently lost to.

This is where the RNG starts. You won’t always have the option to pick the class you want to play, and the Shrines — much like Treasures from the original Dungeon Runs — aren’t all created equal. Some are better than others.

Once you’ve chosen the Shrine, you get a starting deck of a few cards and head into battle against your foes. After each victory, you’re given a choice of loot to build your deck with. You get the same kind of themed card buckets — Discard cards, Hero power cards, buff cards, etc. — as the earlier single player adventures, but instead of the treasures of Monster Hunts and Dungeon Runs, you select teammates who are essentially just special minions. Like I said, if you’ve played previous single-player modes, this will feel very familiar.

Once you win your first battle, you continue facing off against the other eight classes, each represented by a Troll hero like Princess Talanji (Priest) or Zul’jin (Hunter), in increasingly difficult matches. If you’re successful, you’ll be crowned the champion and get a snazzy card back for your troubles. 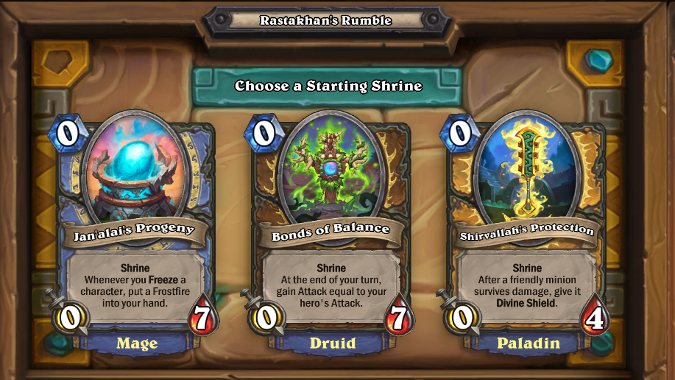 Shrines are your source of power

The Shrines are the main mechanic in the Rumble Run — everything revolves around these special minions. Each one provides a unique ability that will change the way you play your class. Both you and your opponent will have one of the shrines on the list below, and victory will hinge on you making the most of your Shrine ability while preventing your opponent from making the most of theirs.

Shrines start on the board, in play from the beginning of game. You can kill them — and killing your opponent’s Shrine should be a high priority most of the time — but they return to the board in three turns. While they’re dormant, their special abilities aren’t active, which gives you (or your opponent) an opportunity to strike.

Each class has three different Shrine options. I’ve listed all of them below, and bolded what I think is the best option for each class.

The Shrines are in no way balanced. Some are simple to kill — like Treasure from Below, which has just two health — while others are guaranteed to hang around for quite some time. Even though I’ve shown which one I feel is the strongest by itself, that may not help you in any particular match because you won’t always have the option to pick the best Shrine. Here is where Rumble Run’s fierce RNG factor starts rearing its ugly head. Sometimes, you might — read will — get three terrible Shrines to choose from, and you just have to make the most of it. 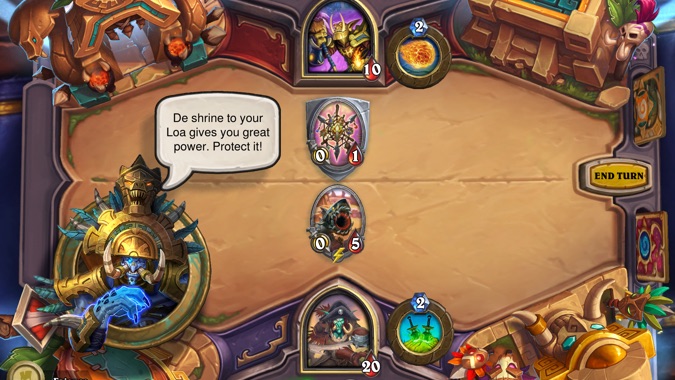 Strategy is all about the Shrines

Taking out the enemy Shrine should be your first priority. The AI doesn’t seem to understand to hold cards while the Shrine is dead, and may play cards that could be tremendously powerful with the Shrine’s buff. By killing the Shrine, you not only protect yourself from it, but you can  get the AI to waste valuable resources.

The key to beating the Rumble is using and abusing the power of your Shrine. It dictates not only your strategy, but also the card buckets you pick to build your deck and teammates you choose to join you. If you chose Akali’s Champion as your Shrine, your Shrine has attack equal to your armor, so you want cards and teammates which grant Armor. For Jan’alai’s Flame, which sets your Hero Power cost to zero, you’re looking for Inspire affects and cards to augment your Hero Power. With Bwonsamdi’s Covenant, which turns healing into damage, you want healing spells and effects.

Here again, RNG is a major factor. While there’s usually a teammate which synergies with your Shrine, sometimes the three card buckets you’re offered have no synergy at all. You might have chosen Dark Reliquary for instance, which summons a Demon when you discard a card — but if you don’t get cards with the discard mechanic, you won’t be able to make use of it.

Your opponent’s deck won’t fall prey to this weakness, as each of the AI’s decks seem built to perfectly support the Shrine they are paired with. One of the rare times I got to the final round, I faced Hir’eek’s Hunger, which redirects damage from your hero to the opposing hero. It was paired with plenty of cards that dealt hero damage — two Unlicensed Apothocarys and a couple of Flame Imps and I was done before turn five. If you don’t get decent choices for your cards, many a run will end earlier than you’d like.

This potential disparity in the power of your deck versus your opponent’s makes for some frustrating matches. It’s not — in most cases — your own poor choices coming back to haunt you. It’s more that the game never gave you an opportunity to make a good choice in the first place.

Some of my longer runs came from Shirvallah’s Vengeance, Jan’alai’s Flame, Krag’wa’s Grace, and Treasure from Below. For Shirvallah’s Vengeance, all I needed to do was keep it alive and it overpowered most bosses. With Krag’wa’s Grace, I got a couple of Unstable Evolutions, and created threats my opponent struggled to find an answer to — again, with a little RNG thrown in. Treasure from Below helped remove key cards from my opponent and gave me resources as long as I could manage to keep it alive. Jan’alai’s Flame coupled with a Mukla’s Champion gave me good board control. In each case, I got to final round but still had some cards that didn’t fit into the synergy I was trying to create. I’ve heard Water Spirit — a Druid teammate — is amazing with Gonk’s Armament, but I haven’t had the luck to get it all in my hand yet.

I think Rumble Run had potential to be a great single player mode but as it stands, I don’t think its something I’m going to spend a whole lot more time with. While the concept is solid, the RNG factor and the unbalanced decks make it more frustrating than fun, and the reward of a card back isn’t enough to get me to keep banging my head against it.