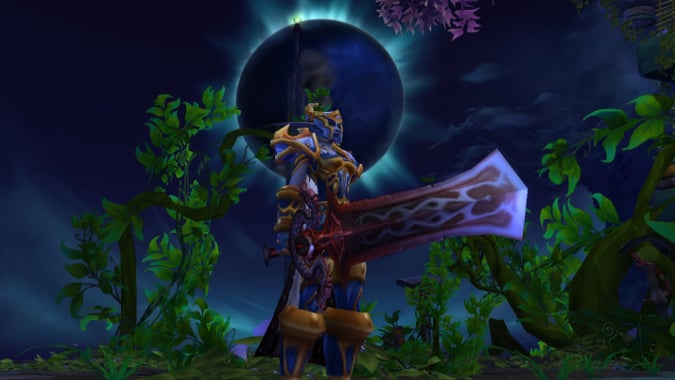 Let’s get right to things, shall we?

Q4tQ: Have you played any other games longer than WoW?

It really depends on how you qualify the question. I’ve been playing D&D since 1981 or so, for example, and you didn’t specify video games. In terms of continuous play of a video game, I’ve been playing WoW since 2004, so that’s a hard one for me — I can’t think of a specific video game I’ve played without stopping the way I have WoW. I played the various Bioware/Black Isle RPG’s before WoW, and I still play them from time to time — just played Icewind Dale again fairly recently, but I don’t play those nearly as regularly as WoW.

QftQ: Who would be your ideal main character of a single player Overwatch-based game?

My dream for an Overwatch single-player game would be that you don’t play any of the established characters, but instead play a unique character of your own creation, with powers and abilities chosen by you, and with the ability to choose between various in-game factions like Talon, Overwatch, the Vishkar Corp, Junkertown and others. The various heroes would appear as NPCs, some you could ally with, others you would have to oppose to achieve your objectives.

It would be great if it had the kind of character creation flexibility of games like Skyrim or Dragon Age Inquisition or even the old City of Heroes/Villains games, where you could play an Omnic, an intelligent refugee from the Moon Base experiments, or a person from any walk of life.

QftRossi: A couple times this week, people have posted here that they had a dream about you. Do you ever dream about us Queuevians?

Let me tell you a little story.

Back several years ago when I was still working at the site that isn’t here anymore, I wrote a post about World of Warcraft. Not terribly surprising, as that’s been my job since 2007. But this particular post caused someone who considered himself big and important in the WoW fan community to become irate with me. Again, not that surprising — it happens.

Anyway, said person said something derogatory about me and one of his fans who was also a commenter on our site came to the Queue (I think it might have still been Ask A Beta Tester back then, before we changed the name) and asked me what I thought about the derogatory thing he said. I responded by saying “Who?” and moving on with my day.

This irked him even more.

Soon, a literal avalanche of his followers began coming to the site, leaving comments to the effect that awful things should happen to me, that I was the worst thing that ever happened to the site, that I should die. Eventually they expanded to wishing I would take my own life, or saying they would come find where I live. We of course banned them from the site, but this just meant that they started emailing me. Death threats, threats against my wife, even threats against my cats.

Because I wrote an opinion about World of Warcraft someone didn’t agree with.

That particular person isn’t around anymore, but he did a lot of damage. I have bad dreams about people coming to hurt my wife because I said something I don’t even remember about WoW. To this day, I have those dreams. People often don’t realize that the things they say to other people online can really have an effect, that they’re real words that can cause real pain. And of course, some people don’t care because that’s what they want.

None of you seem to be that kind of person, or we’d have blocked you by now. But it definitely left a mark and I remember it to this day.

Okay! I have it right this time!

Repost for the Rossi que:

I had the strangest dream last night. Rossi (the real Rossi) and I were
stuck in Azshara, and we were debating whether ghosts made the water in
the lake closest to Ogrimmar unsafe to drink. He was determined that
traces of their anger would taint the water and make it unsafe and I
kept arguing that their ghosts so they can’t leave anything tangible
behind.
That’s all I remember, but it was amusingly odd.

So, Q4tRossiQ: Do you think ghosts would taint a supply of fresh water?

In The Phantom World, Augustine Calmet argues that the truth of the supernatural is often delusional, that we see ghosts and monsters because they answer an unspoken need in us. Calmet doesn’t dismiss all such apparitions and phantasms in this way, but I’ve always found it a compelling idea — that a ghost is less a revenant haunting the living and more an echo of the emotions felt while it was alive, like a loud cry reverberating across a chasm separating us from the past.

Now, does one believe that such a resonance could have an affect on the taste or safety of drinking water? Perhaps. I am not an expert in such matters.

Okay, that’s the Queue for this week. I’ll see y’all next time around. Have a good time if you can, I know next week is stressful for some folks.

Blizzard Watch is made possible by people like you.
Please consider supporting our Patreon!
Filed Under: Elune
Advertisement