Okay, yeah, this one’s mostly for me. But sometimes you have to write on something you love. And there are interesting lore questions to be asked about Ashkandi, Greatsword of the Brotherhood. For starters, why does it look like that?

The general assumption is that Ashkandi is the blade of Anduin Lothar. Specifically, it’s assumed to be the ceremonial greatsword of the Brotherhood of the Horse, the order of knights he was armsman and leader of during the First War. Much of the Brotherhood died during the Horde invasion of Stormwind, selling their lives to buy Lothar enough time to evacuate the city. While they died, they killed enough Horde to weaken their ranks to the point where Orgrim Doomhammer was willing to allow Gul’dan to live in return for his help in bolstering said ranks, and this Gul’dan did by transplanting the souls of his loyal necrolytes into the bodies of the slain knights, creating the first Death Knights.

But if Ashkandi was the greatsword of the Brotherhood of the Horse, why doesn’t it look like other weapons from Stormwind’s fabled past? The Great Royal Sword that Turalyon used for a while after Lothar does not look at all like Ashkandi, save for both being large blades. Ashkandi bears a draconic motif instead. One might suspect that the blade was changed by the black dragons who held it, but that raises several questions. First, since we know that Turalyon carried the Great Royal Sword and that the Alliance forces reclaimed Lothar’s body, how did Nefarian claim Ashkandi? If it was Lothar’s blade, can we expect the Alliance to have just left it on the field of battle, considering they went to such lengths to reclaim him? And it’s not like the Orcs were in any shape to stop them — even after some of them retreated into the bowels of Blackrock Mountain, the Alliance was able to raise a statue of Lothar on the site of the battle that lasts to this day. 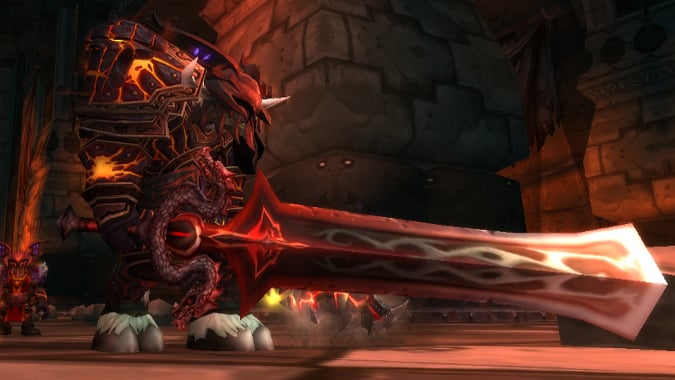 The Greatsword of which Brotherhood?

Furthermore, even if we assume that Lothar carried two greatswords into battle, which I’m willing to do — it’s Lothar, if he wanted to carry two greatswords around, who was going to tell him no — there’s a problem. The blade doesn’t look like black dragons. The blade’s hilt is shaped like two red dragons. Why would Nefarian go through all the trouble of claiming this blade and then change it to look like his enemies in the red dragonflight?

We know that Ashkandi can’t be the Great Royal Sword, as Turalyon was carrying and using that blade as recently as during the Alliance Expedition to Draenor and the destruction of the world by Ner’zhul’s reckless use of portal magic. Indeed, it even seems that the blade Turalyon is using now might well be the Great Royal Sword, reforged using the Army of the Light’s Lightforging magics. But let’s look a little more closely at the sword Turalyon is using. 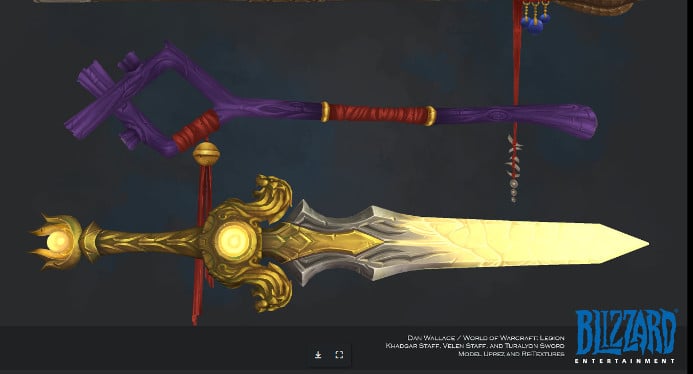 The Great Royal Sword and Turalyon

If you look at the image of the blade Turalyon is using above, and compare it to this image of Ashkandi, you can see that the hilt and blade arrangement are very similar. The lions and central disc in the presumptive Great Royal Sword image is very, very similar to that of Ashkandi’s dragons and eye arrangement. Furthermore, both blades tend to narrow at their point of contact with the hilt, only to expand out and become wider as they extend past it, before then narrowing slightly from their widest point. The Turalyon blade is of course a more detailed model than the blade we got back in 2005. But it definitely suggests a connection between Ashkandi and Lothar. But what is that connection?

If the blade Turalyon is using is the Great Royal Sword, somehow reforged with the Light, that suggests that the Great Royal Sword was a weapon intended for one hand use — a longsword, not a greatsword. Therefore, it’s possible to imagine that Lothar would have carried Ashkandi and the Great Royal Sword into battle as a pair, one to use along with a shield and the other to use in more aggressive combat. This is supported by the novel But it’s still hard to understand why the sword would have been left on the field of battle and harder still to understand why the blade would have been changed to honor red dragons by black dragons. 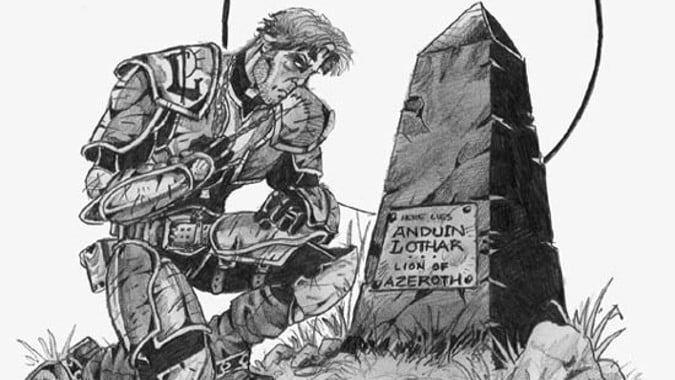 One possibility that comes to mind is that the blade may not have been taken by black dragons or their servants at all. There’s a famous work of art by Chris Metzen of Turalyon visiting Lothar’s grave, which of course means that Turalyon knew where it was. Lothar died before the rebuilding of Stormwind, but there’s at least one marker in the Stormwind cemetery that seems likely to be his resting place — it’s a larged domed tomb with a large stone block in the center as a monument, and it’s next to Tiffin Wrynn’s grave, so it’s in a place of honor. It’s at least feasible that someone moved his remains from wherever they were originally kept — probably in Lordaeron — to place them in Stormwind once it was reconstructed.

The question then becomes, was Lothar interred with his greatsword? If so, is it still there? After all, Onyxia was present in Stormwind for years, and the red dragons knew this. After all, they’d infiltrated Blackrock Mountain. Vaelan, aka Vaelastraz, was working to give mortal heroes the Seal of Ascension and allow them to confront Nefarian at the top of Upper Blackrock Spire, where the Blackwing Lair resided. It stands to reason that the red dragons may have sought an edge against Rend and Maim Blackhand and their Dark Horde, and what better edge could you find than a weapon wielded by Anduin Lothar — especially if they knew the black dragons wanted it? It would explain how Nefarian got his hands on it after he and Vael fought. Nefarian took the sword from his defeated foe before he could give it to those same mortals he aided during the fight against Rend Blackhand.

But that’s just a theory. It would explain why the sword has seemingly been altered to look like a red dragon artifact — if Vaelastraz somehow imbued the weapon with the power of his dragonflight intending to hand it over to a mortal champion, only to be beaten and corrupted by Nefarian and dying before he could. But that’s not confirmed — indeed, we don’t even know for sure if the sword actually belonged to Lothar, or how Nefarian got his hands on it one way or another. The mysteries surrounded the blade and its relationship to Lothar and the Brotherhood of the Horse remain to this day. Such secrets only add to the weapon’s allure, and I hope someday we find out more about it and the Brotherhood.