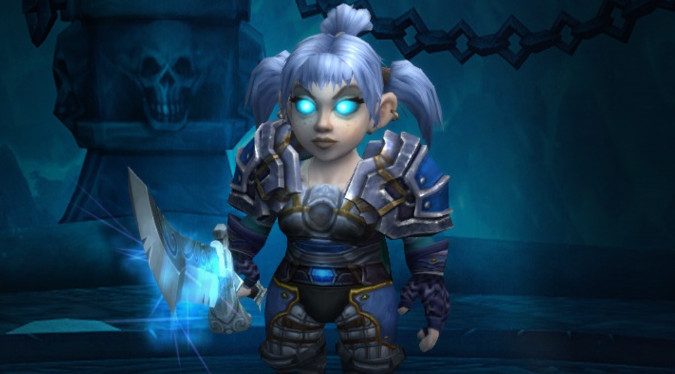 This character profile has been written for Bluella, one of our supporters. If you enjoy it, you can check out the other profiles we’ve written, too!

She watched the Troll die, studying how it jerked and gasped, each hitching breath bringing it — she, she corrected herself, that’s a woman, not a thing — closer and closer to cessation. The clockwork of its heart pumping precious blood out of the wound where its stomach had been.

Hers. Not its, hers.

Her eyes were wide and staring, too proud to plead. Her tusks — smaller than a male Troll’s would be, but far longer than any teeth in Bluella’s mouth — were dark with her own blood, likely from biting her lips to keep from crying. The smell of her death mixed sweat, and blood, and offal, a rank, wild smell.  The Troll woman dropped into unconsciousness and for a moment, Bluella just watched as her heart slowed, the blood staining the ground around her.

“Wounded one here. Might know something.” Her own voice sounded strange to her ears now. It echoed and boomed, far deeper and more resonant than it had been when she’d been alive. Two members of the 7th Legion ran to see what they could do and quickly staunched the bleeding from the gut wound, gesturing to the Pandaren girl with the ringed staff to come and lay hands on her. She’d live.

Bluella didn’t stay to watch. She wasn’t interested in what it looked like when the heart returned to pumping the usual amount of blood, when breathing was deep and even. Watching the machine work was instructive, but watching it fail was more so — it was a way to learn the limitations of the contrivance. Jammy had called it testing to destruction. For Bluella, it had simply been the fun part.

She walked to where her mount waited, cropping tall grass that fell out of the hole where its stomach had been. She watched the chewed fragments of grass drift to the ground in clumps. The Deathcharger had no fluids to soften what it cropped, so the grass was simply dry shreds. This close to the beach, there were also fragments of leaves and fronds in the piles it left behind as it moved, a dead thing that didn’t know it didn’t need to eat anymore. It suffered, and that suffering kept it moving, but it wasn’t alive, and its bestial nature kept it from understanding that.

She clicked her tongue and it dropped its head and let her climb up and into the saddle. When she’d been alive, riding a horse had always been a bit thrilling — they were so tall, tall enough that even Humans and Elves looked a bit silly perched up there. Gnomes like she was — at least outwardly — couldn’t even reach the thing’s belly with their legs. She’d have loved to have a horse, back when she and Jammy had first set out from Gnomeregan to see the world.

We’re going to do everything! Jammy’s voice was in her head, and that was a familiar pain. She remembered everything the two of them had done and said, all their big and little moments. She rode south along the beach to where the transport waited to take her and her dead mount back to Boralus, taking her time, grinding her thoughts into the broken shards of those memories and letting each one cut her again. Their days in training. Qualifying for the Engineering Corps. One last adventure before settling down, exploring parts north of Dun Morogh. The letter from mother, telling them not to come home — the madness of the Troggs, the disaster caused by Mekgineer Thermaplugg himself.

It had hit Bluella like a fist. She certainly had respected Mekkatorque as an inventor, for pure engineering, but she’d admired the Mekgineer for the actual craft of construction, for taking an idea from the imagination to an executable plan. Sicco Thermaplugg had been the acknowledged master, and Bluella had looked forward to being his student. Instead, so many had died, including Azuella and Cammshaft. Jammy had broken down crying, but Bluella had felt a cold rage and a determination to try and make a difference, to fix it somehow. To retake Gnomeregan. And so the two of them had set out for Dalaran, where they could train and make plans, study what the Humans knew of techniques. Both she and Jammy had studied the Arcane as well, it was so much a part of being a Gnome, and together they’d hoped…

The sound of the Deathcharger’s hooves on the plank as she rode up onto the ship distracted her. She swung her leg over the side and dropped three feet to the ground. When she’d been alive it would have sent shock up her legs, she would likely have squealed. Now, she felt nothing. She didn’t hand the Deathcharger off to anyone. None of them were eager to take a dead thing in hand, and it wouldn’t move or shift around the ship unless she told it to — it could stand there on the deck out of the way, unafraid of everything because it simply couldn’t feel very deeply anymore.

She remembered when the Scourge came to Dalaran, of course. She remembered holding a staff she’d built herself, with two large gears locked together on the end. The way the teeth clicked together helped her lock into the magic, she’d said. The truth was, she’d just liked how it looked. It was a fun flourish. She missed being able to be charmed by little details.

“Death Knight.” She saw the big Human Paladin walking along the deck. Wyrmbane, she summoned his name from where she’d pushed it to make room for observations. “How did your mission go?” He was a brisk one, all business — at least he was with her. She’d seen him be more personable with others, but they weren’t corpses. She was forced to look up to gauge his expression. Bland, but not overly hostile. She assumed he probably despised her, but was either too polite or too desperate to say it. They were at war, after all.

“We killed or captured the Trolls. None of them know about the bombs on the ships.”

“Excellent.” He nodded to her and moved on. She watched him, the way his arms and legs rippled with muscle. Seeing the living move with a kind of easy fluidity that she lacked was always equally fascinating and frustrating. Compared to the way her Deathcharger twitched and clicked as it moved, or her own stiff limbs always threatening to lock in place but never quite managing, it brought her back to watching the Troll on the beach. Watching the life steadily stain the sand under its body where she’d ripped it open.

Her. She was a woman.

She stepped to the rail and watched the sails fill with wind, the ropes and pins and pulleys that kept the beams and masts rigged up and working. She no longer had her old sketchbook, but she still had eyes, could still memorize how it all drove the boat forward. A feat of applied engineering translating the wind into motive power. She could almost see it like a blueprint. Much as the Troll had been, diagrammed in her imagination.

So much was gone. Her old life. Jammy, who’d begged for death and who Bluella had killed, still under the sway of the Lich King. Gnomeregan and her dreams, her heroes all gone or insane or both. Even her allies viewed her as a necessary evil, a tool to be discarded if it ever proved too costly. She watched Zuldazar as it grew smaller, listened to ropes creak and pulleys rattle, watched the mast turn and the beams raise and lower the sails as they went. Each piece part of a whole, born in some designer’s brain, but made real by engineers who took that vision and gave it form.

Looked down at her hands and remembered driving the runeblade into that Troll’s belly. That was her gift now. That was the wind that drove her, kept the ropes taut and pushed her every forward. Many of her brothers and sisters in the Ebon Blade liked to parrot Mograine, saying Suffer Well without any real idea how or what it meant. But Bluella knew that to suffer well, she had to keep the pain vivid, the memories sharp — she had to see Jammy die, over and over again, to catch that wind in her sails. Let it push her onward, keep her moving. Never stopping.

She was an engine of death and that was enough.