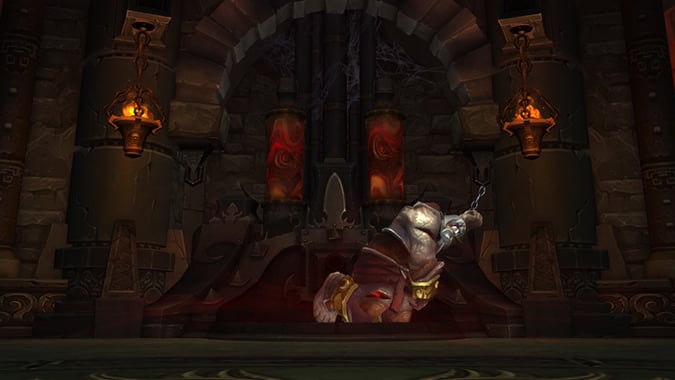 The above image is a pictorial representation of skipping in to do the Queue and realizing what exactly last Friday’s author left me to work with. Thanks, Mitch.

Regardless, we’ve still got a few questions to answer and some things to chat about, so let’s get to that, shall we?

I feel like there’s some kind of imbalance between Kul Tiras and Zandalar as far as how many quests there are. I think Kul Tiras/Alliance have almost too many quests compared to Zandalar.

My Horde main hit 120 when he was about 1/2 of the way through Zul’dazar after doing all of Vol’dun and Nazmir; my Alliance main is almost 119 and he hasn’t even done 2/3 of Stormsong Valley (I think) and there are still a bunch of quests left in Tirasgarde Sound as well.

See, I almost feel like it’s the other way around – I did all the quests in Tiragarde and Stormsong, hit 120 part of the way into Drustvar. On Horde, I just did the main storyline quests for all three zones, and hit 120 with a lot of the side stuff unfinished. I managed to finish off everything in Kul Tiras in an hour or so, but I still have piles of quests I haven’t done on my Horde alt — nothing major as far as story stuff goes, but there’s a lot there.

I feel like maybe part of it is how one chooses to level, maybe? The Alliance character was the first one I leveled right out the gate with Battle for Azeroth, so I took a lot of time exploring and made it a point to completely finish out zones before I moved on. With the Horde alt, I was mostly concerned with finishing off the main storylines and nabbing the achivement associated with doing so — I wasn’t as concerned with the whole completionist aspect, if that makes any sense.

I’m guessing that maybe both sides are a little more equal than either of us think, quest-wise — it’s just a matter of which one you did first, or what your approach was with each alt, maybe? Either way, it’s nice that there’s no shortage of quests to do on either side of the faction fence, isn’t it?

Fun story — since I primarily live on RP realms, I keep to the naming rules for the server. This means that all alts, including the bank alts, were named with RP-appropriate names. Back in the day however, bank space was at a premium, so all my bank alts had guilds. The guilds were the things I usually named as a little nod to what that character was actually created to do. Stuff like “Accountant Firm,” “Finance Consultant,” or “Loan Officer,” that kind of thing.

I’d still get random walkups every now and again from people who just wanted to RP, but I’d have my character just talk about business and exchange rates and storage shortages, at which point they’d usually get the picture and find somewhere else to be. But they’d have a good laugh about it!

Does Mitch play a Shadow Prist?

No, he plays a Shadow Prius.

We have to plug him in at night, but he gets great mileage.

When did they expand 1h sword/axe/mace transmog to include fist weapons? I just discovered the change and it is amazing. Don’t need to worry what weapon I get on my combat rogue anymore.

In patch 8.1, which means Combat Rogues have more options for transmog and can be terribly pleased about that. Me and my Assassination Rogue will be over here, staring at the daggers we’re forced to use for our chosen spec, giving another long stare to the lengthy library of absolutely mediocre dagger models we’re only allowed to transmog from, and giving a lengthy, Office-style stare to camera in the meantime.

If you are in a party in Darkshore and kill a rare and it drops a mount, can you give the mount to a party member?

No, I don’t think so — they’re Bind on Pickup, unfortunately. I believe the same applies to gear you get from rares as well. Sorry!

I think I may roll a Zandalari Paladin. They can be paladins, right? I want a horde paladin, so it would either be blood elf or zandalari.

They can! With the addition of patch 8.1.5, you’ll be able to make a Blood Elf, Tauren, or Zandalari Paladin on Horde side. Meanwhile the addition of Kul Tirans on Alliance side means they’ll have another option for both Druids and Shaman. And if you level that Zandalari Paladin all the way to 120, you’ll also unlock their heritage armor, so it sounds like a good deal all around.

Q4tQ: What are the chances that, since we have Allied Races, we will have other race variants of Forsaken as player characters (OrcForsaken, DwarfForsaken, TrollForsaken, etc)?

Right now I’m thinking the chances are pretty low — it’s all about silhouettes, which is kind of how WoW has worked for a long time now.  If you see a character, you should be able to identify what that character is at a glance. So if you see a Dwarf, you know it’s a Dwarf, it’s Alliance, it has x number of classes it can potentially be, etc. A Forsaken Dwarf would look like that Dwarf you saw, only…undead — it’s not Alliance, it’s Horde.

Beyond that confusion, there’s also limitation to what a Forsaken can be. No Shaman, no Paladins, no Druids — if you had a Tauren Forsaken, you’d expect they could be a Druid just like the other Tauren, right? Only they couldn’t. The same goes for that Dwarf — you want to make a Dwarf Paladin, but you can’t with a Forsaken Dwarf, because that Forsaken racial classification overrides any of the other racial classifications.

Basically it just gets all gummed up in a tangle of what’s allowed and what isn’t, and you can bet that whatever choices were made on that front, there would still be people unhappy with whatever limitations and choices were set in place, no matter how ingrained in the story — and class balance — the reasoning behind those decisions happened to be. Could Blizzard figure it out? Probably…but there are better choices out there to be made as far as Allied Races go.