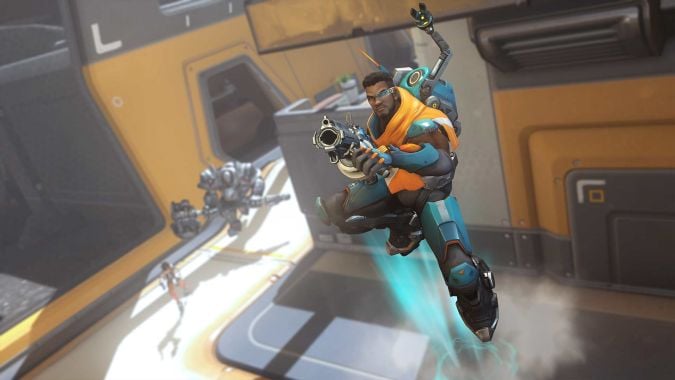 After a relatively surprising announcement last night, Jean-Baptiste Augustin is now officially on the Overwatch PTR. I played a couple No Limits games as him, and I’ve gotta say… he feels pretty dang strong. He also plays almost entirely different than I expected him to, but that’s not a bad thing by any means.

Before I dive into impressions, though, take a look at his ability kit, courtesy of his official hero page:

Regenerative Burst (Left Shift): Baptiste activates an intense regenerative burst that heals himself and nearby allies over time.

Immortality Field (E): Baptiste uses a device to create a field that prevents allies from dying. The generator can be destroyed.

Amplification Matrix (Q): Baptiste creates a matrix that doubles the damage and healing effects of friendly projectiles that pass through it. 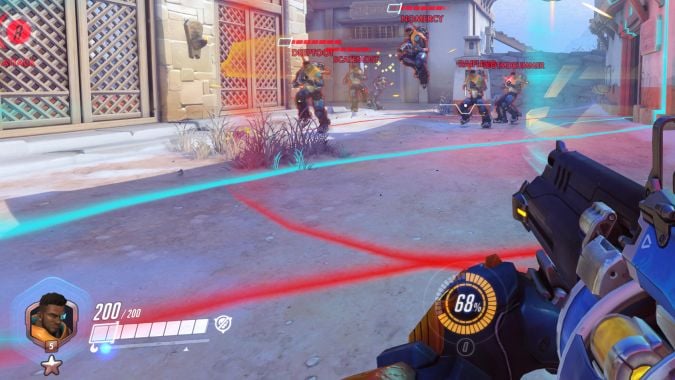 Allies and enemies both have their own indicators to alert players they can’t be taken below 20% health.

The biggest news: He has an Immortality Field

The ability everyone is freaking out about right now is his Immortality Field — both because it’s a freaking immortality field and also because it’s not even his ultimate ability. The device that Baptiste throws feels like a mix between Mei’s ultimate (hovering in the air) and Orisa’s ultimate (able to be destroyed), and anyone who stands in it cannot be brought below 20% health. Similarly, anyone below 20% health is healed up to 20% when they enter the field. It also bounces off of walls if you happen to throw it at one. I thought I’d be throwing mine at the far end of the capture point only to have it bounce off the wall and land closer to the center. It’s not a bad design, but it did catch me off guard.

What I do love is that the Overwatch team thought ahead and figured out a good way to show when a play is in the Immortality Field and how it affects their health. Looking at the image above, the white boxes around health bars (both enemy and ally alike) indicate how low a player can be damaged before they scoff at death. That said, I’m a bit concerned that health bars may end up feeling cluttered if we see a Lucio/Brigitte ultimate combo.

Also, the ability is strong. Like, Mercy’s mass-resurrection was too powerful, but preventing an entire team from dying to a wombo-combo ultimate barrage isn’t? I guess we’ll have to wait to see how easily the device gets destroyed and what tweaks are made over time, but right now, it feels specifically designed to counter ultimates without considering its usage in all other situations. This is definitely something to keep an eye on.

So what are his downsides?

Anyone who’s gotten used to Brigitte’s or Moira’s ability to dish out a decent amount of damage while also healing themselves may have to do some adjusting with Baptiste. It may very well be an issue on my end, but aiming his three-round burst fire takes a lot of getting used, and it never hits as hard as I expect it to. By no means is this a bad thing! He’s a Support hero and should not be able to compete with damage dealers. But it’s still something that I expected to feel stronger than it did.

Somewhat related, his main method of healing — as in, actual restoring of health — is his secondary fire. It fires a Junkrat-like grenade (sans the bouncing) and heals anyone hit by it — think of it like Ana’s Biotic Grenade loaded into Junkrat’s weapon. Unlike Ana’s Biotic Grenade, Baptiste does not heal himself with this ability. As a result, his only self-healing comes from his Regenerative Burst, which means that he won’t be as powerful one-on-one as some of the more damage-heavy Supports. Like I said, though, I don’t really think that’s a bad thing, especially given how strong his healing kit is.

As for his Ultimate ability (pictured above) is something I genuinely haven’t gotten a solid read on yet. It’s a small window-like field that amplifies healing and damage fired through it, which seems like it’ll come in handy especially in places that have choke points. Coupled with a Symmetra ultimate, your team will be protected from enemy fire and able to do more damage to the enemy. That said, it’s hard to tell if it actually has much of an impact. I kind of wish a “total damage/healing boosted” stat would pop up while the ability was active — really, anything to see how effective it is in the moment. Overall, it feels like a much more situational/coordination-requiring ultimate whose payoff is hard to judge.

Baptiste is fun. Lobbing healing grenades is a blast (no pun intended), and his Exo Boots add a unique flavor that, strength aside, will be fun to watch in action at the pro level. Right now, it’s going to take a bit more testing in Quick Play to get a feel for Baptiste’s place on a team and how Exo Boots and Amplification Matrix impact his greater playstyle. Of course, Baptiste is one change of many, and the patch he’s arriving with is full of bigger changes. Be sure to check those notes out here, and if you want to experience Baptiste for yourself, check out the PTR.