When we last checked in on the Heroes of the Storm development team, we were told that we’d be getting a series of Reddit AMAs to help shed a little light on what we could expect for the future. We’ve just gotten the schedule for these, the first of which will take place on March 6th from ten until noon PST. This will be devoted to talking about ranked play, matchmaking, and balance. We’ll be getting three AMAs total over the next three months. I’m hoping that these are fun discussions and the team wants to keep doing them. Even if it’s just a general check-in with a couple of the developers, it’s nice to see them engaging with the community.

Blizzard also touches on the recent issues with the AI in games. For about the last month AI controlled heroes have been making some poor choices. They’ve either been focusing the mercenary camps or objectives too much — and ignoring player commands to follow and assist. They’re working hard to get a hotfix out to rein in these rogue AI and will let us know more when it’s ready. 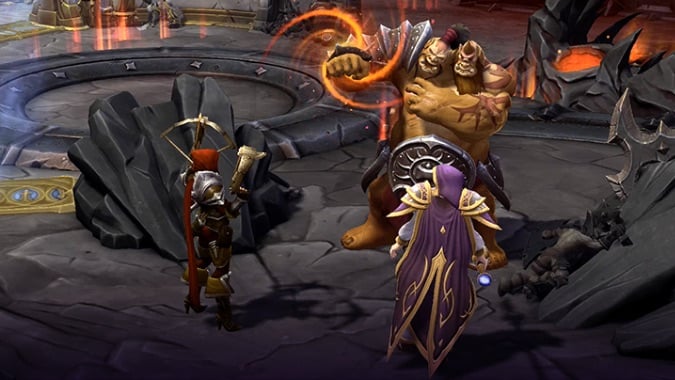 The latest patch went live on Wednesday, bringing with it a slew of talent changes and fixes to almost a third of all the heroes in the game right now. On top of that, we got developer comments for each hero affected. While not something to be expected going forward, this ties in with increased communication that helps us get a feel for what they’re aiming for with their changes. None of these changes are a full hero rework. They’re just trying to buff less popular talents to make them more competitive choices.

Standouts include a buff to Li-Mings level one talent Aether Walker, whereby using her Teleport ability will also increase the damage of her Magic Missiles. If you combined that with some of her other Magic Missile focused talents like Mirror Ball and Seeker, you’d be a force to be reckoned with. Rexxar and Misha get some buffs, moving more damage into active choices made by Rexxar. Which means less standing around and watching Misha do all the work — you’re partners after all!

Nobody knows partners better than Cho’gall though. Some great changes there to really help bring him back into the fold. Right now there are too many counters to make Cho’gall safe pick. Cho gets his level 13 and 16 talents swapped, giving him access to defensive choices a little earlier — while Gall has some buffs to the Dread Orb. The reverse hit gets an extra 50% damage to heroes, and the stunning Orb talent at level 16 gets an extra quarter second of stun. Taken together and you’ll have a much easier time landing that third bounce for juicy damage.

The Heroes community has stepped up in a big way to make sure that we’re still getting quality events. Division S from Heroes Lounge has been running qualifiers all month. 16 teams across Europe and North America are ready to step into the Nexus and fight for their share of the $16,000 prize pool. Lots of former professional players have joined up, and competition has been fierce to get to this point. Heroes Lounge is also running a separate invitational tournament with Team Nut from China. The Nut Cup will run on March 9th and 10th and feature an $1800 prize pool sponsored by Team Nut. That’s not peanuts!

HeroesHearth Entertainment has also been hard at work. The HeroesHearth Fight Night is a bi-monthly king of the hill style tournament. Where the winning team comes back to defend their title at the next event. Hosted by Halorin and JHow, these games have been amazingly fun to watch. The casting has been hilarious, with lots of audience interaction and jokes thrown left and right. Playing in a best of five, they’ve run all five matches both events. We’ve gotten to see some amazing match-ups on maps that weren’t part of the HGC and even had a Murky or two pop-up — in the same match! The next Fight Night is scheduled for this Friday featuring newer teams Scythe Esports and Revive Esports.

Carbot Animations has still been hard at work making HeroStorm videos showcasing new and fan favorite heroes. I know that I’ll never look at Imperius the same way after watching his video. The hero releases may have slowed down but not his ideas. The most recent video was a glorious combination of heroes who counter each other really well. It all culminates in a reminder that Faerie Dragons may be cute — but they’re also murder machines.

As we settle into the new cadence of releases for Heroes I’m glad to see that the community that has formed around the game remains strong. We should be getting a fresh spring event in the Nexus sometime in March. It’ll bring back all of the Lunar New Year skins, as well as have a fresh skin theme to go with the new event. Could this be the year we finally get more candy themed heroes? Funny Bunny Murky and Kandy King Muradin are awfully lonely. I have my fingers crossed for a jam-themed Ragnaros. By Raspberry be Purged!